Donald Trump’s congressional allies cannot catch a break. Just when it seems they’ve settled on a theory of the case against the president and a message around which they might unite in his defense, a new revelation rips the rug out from under them.

Almost from the moment the initial whistleblower’s complaint became public knowledge, the president insisted that nothing untoward occurred on his July 25 call with Ukraine’s president. Trump maintained (and continues to insist) that there was never any effort to leverage the power of the presidency and congressionally authorized military aid to compel Kyiv to conduct investigations into his political adversaries: Hillary Clinton and Joe Biden. For the president and his family, their position is quite clear: “There was no quid pro quo.”

But the facts of the case have changed radically in the seven weeks that passed since the allegations were first made known. And virtually none of the GOP’s efforts to defend the president have survived amid scrutiny of those facts.

“They’re going to be embarrassed when these transcripts come out,” House Minority Leader Kevin McCarthy said of his Democratic colleagues on September 25. But the rough transcript of the president’s conversation with Ukrainian President Volodymyr Zelensky appeared only to confirm that Trump tethered Ukraine’s desire for lethal military aid with a “favor” in the form of two investigations into the affairs of his domestic rivals.

On October 17, White House Chief of Staff Mick Mulvaney confessed to a roomful of anxious reporters that there was, in fact, an administration-wide effort to compel Ukraine to conduct an investigation into a conspiracy theory involving a missing server, which the president believed could contain Hillary Clinton’s missing emails. There was not, he appeared to suggest, a similar effort to withhold the disbursement of military aid, nor did the White House leverage its influence to force Kyiv to investigate the Biden family. Republicans dutifully hung their hats on this assertion right up until October 22, when Trump’s chargé d’affaires in Ukraine, William Taylor, testified that he was told that “‘everything’ was dependent on such an announcement, including security assistance.”

Ah, Republicans replied, Taylor only heard this from second-hand sources. He was not on the original phone call (nor, for that matter, was the whistleblower who ignited this firestorm), and the person who told him that “everything” was dependent upon an announcement (not the commencement) of an investigation into the Bidens and the mythical server had denied it. But that person, America’s European Union Amb. Gordon Sondland, soon revised his testimony to closer reflect Taylor’s recollections. Moreover, the testimony of NSC staffer and Lt. Col. Alexander Vindman provided a first-hand account of the infamous July 25 call and related efforts behind the scenes to compel Ukraine to, in the whistleblower’s words, “play ball.” Vindman alleged that Sondland “emphasized the importance that Ukraine deliver the investigations into the 2016 election, the Bidens, and Burisma.” So much for those talking points.

By the end of October, Republicans were left with few avenues to argue against the president’s culpability, but a handful remained. Savvier Republicans argued that officials in Ukraine could not have perceived the president’s request for a “favor” to have been an attempt to strong-arm them because Kyiv was not even aware at the time that the military aid had been waylaid. What’s more, that aid was eventually released, and Ukraine didn’t have to take any actions to secure it.

Indeed, the new Ukrainian administration did not know that military aid was held up at the time of the call between Zelensky and Trump, but it learned of this attempted inducement only days later (several weeks before August 28, when the stalled disbursement of aid was first publicly reported). And we now know that Ukraine did, in fact, attempt to satisfy the White House’s demands. The New York Times revealed this week that high-level communications among Ukrainian officials indicate they were prepared to publicly announce a new series of investigations into Trump’s political targets. The release of U.S. military assistance to Ukraine on September 11 only followed what the Times describes as an “uproar” in Congress—an “uproar” that coincided with the transmission of the whistleblower complaint to congressional intelligence committees on September 9.

For Republicans who are sticking to the facts of the case, all that is left to them is the argument that none of the president’s actions were explicitly illegal. That remains to be seen. On Thursday, the nonpartisan Government Accountability Office confirmed it was reviewing the circumstances around which Ukraine’s assistance was withheld and whether the administration broke the law by failing to notify Congress about the contravention of its expressed intent.

At most, the GOP’s efforts on Trump’s behalf represent a series of lost opportunities. If Republicans want to argue that the president’s actions are not so egregious as to merit impeachment and removal from office, that’s an intellectually consistent and reasonable case. But neither the president nor his allies in the conservative press are inclined to lend any legitimacy to the mounting evidence that everything in the initial whistleblower complaint was true. The longer the president prevents Republicans from making the only logical argument they have left, the more their resentment toward the president will grow. And it’s never a wise idea to antagonize the people who will one day determine your fate. 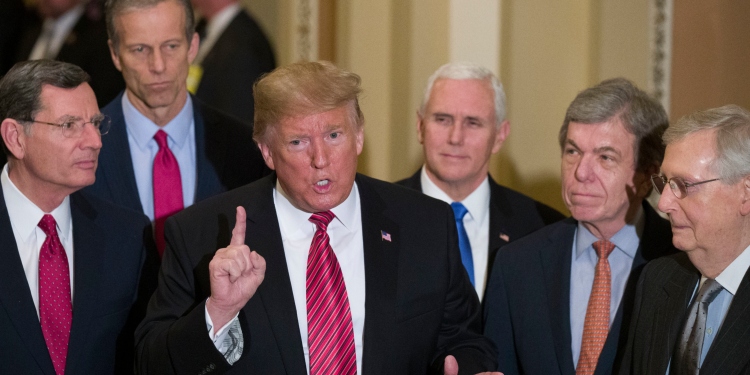