When asked by MSNBC’s Joe Scarborough to relate some of the lessons he’s learned as the face of the nation’s COVID-19 response over the last 13 months, Dr. Anthony Fauci had one lesson to relate: Tell the truth.

“You’ve just got to be completely honest and true to yourself and to your principles, even though you’re going to have to tell people some things that might be inconvenient truths,” Fauci said on Tuesday. Those “inconvenient truths might put you at odds with people,” he stoically admitted. Nevertheless, you must be “consistent as a scientist and a public health figure.”

The discernable note of self-pity in Fauci’s remarks isn’t unwarranted. The doctor may be feeling a little embattled these days. While the National Institutes of Health director isn’t facing down a skeptical president anymore, he has become an obstacle to one of today’s chief public health objectives: getting vaccine-reluctant Americans to take a COVID shot.

A recent focus group of vaccine skeptics, most of whom were Republican voters, found that the group regarded Fauci as a “liar,” a “flip-flopper,” and “opportunistic.” In its reporting on the focus group, the Washington Post deemed that a learned response. They were “echoing Trump’s charges,” the paper determined. Perhaps Fauci and the people around him believe that this is unfair, and these are unthinking mannequins simply regurgitating the propaganda they’ve been fed. But only the rawest narcissism could justify the conclusion that Fauci is in bad odor only because he’s been a brave truth-teller confronting a disbelieving public with an honest appraisal of the circumstances. Fauci has done enough over the past year to justify some of their suspicions.

By the summer of 2020, public health officials had performed a 180-degree turn regarding the utility of face masks. Masks, Surgeon General Jerome Adams said on March 2, 2020, were “not effective in preventing” the spread of COVID. “Seriously, people,” he advised, “STOP BUYING MASKS.” It seemed counterintuitive even to the lay observer—odd that this would be the only airborne contagion with a spread that could not be slowed by facial coverings. In a June interview with The Street, Fauci explained that the government’s priority wasn’t to be honest with the public, per se, but to keep hospitals from collapsing. So, the government had to lie.

Fauci explained that “we were concerned that it was at a time when personal protective equipment, including the N95 masks and the surgical masks, were in very short supply. And we wanted to make sure that [masks got to] the people, namely, the health-care workers who were brave enough to put themselves in a harm way, to take care of people who, you know, were infected with the coronavirus and the danger of them getting infected.” That was a valid concern. So urgent, in fact, that might even justify deceiving the public. But it is deception, nonetheless.

By the middle of last year, Fauci again misled the public for the greater good. As the New York Times reported, his estimates about the level of seroprevalence that would constitute “herd immunity” kept changing. One day, it would be 60 to 70 percent of the public. Another, it would be 70 or 75 percent. By December, it had grown to 75 or 80 percent. In an interview with the Times, Fauci was confronted with these shifting figures and “acknowledged that he had slowly but deliberately been moving the goal posts.” That determination had nothing to do with the science as he understood it, but the policy outcomes he was hoping to nudge the public toward.

“When polls said only about half of all Americans would take a vaccine, I was saying herd immunity would take 70 to 75 percent,” Fauci told Times reporters. “Then, when newer surveys said 60 percent or more would take it, I thought, ‘I can nudge this up a bit,’ so I went to 80, 85.” The doctor added that neither he nor anyone else really knew what percentage constituted herd immunity, though that never stopped him from speculating on the subject. He simply decided that manipulating public opinion was a more important objective than admitting his own uncertainty. Being completely forthright would not have advanced his or the general public’s interests.

Fauci has enjoyed a reputational renaissance during the nascent Joe Biden administration. As Politico reported on Monday, Fauci is a fixture in the Oval Office, regularly advising the president on the pandemic response and enjoying more influence than most. One of his feats has been to overrule what Politico described as “several lawmakers and health experts,” including well-known members of Biden’s COVID advisory board Zeke Emanuel and Michael Osterholm, regarding the efficacy of both the Pfizer and Moderna vaccines.

The data health officials are increasingly observing amid the real-world dissemination of these serums suggests that the first dose is highly effective. Therefore, some have advised Joe Biden to recommend delaying a second dose to ensure that more people are inoculated as fast as possible. Fauci disagreed for two reasons: The first and most defensible reason, the data wasn’t sufficient to justify such a policy. The second, less defensibly, was “that changing the recommendations now would be a logistical and messaging nightmare.”

But the public health messaging around this virus has changed along with the data, as it should. And Fauci himself has revised his recommendations to better comport with what scientists and medical professionals were witnessing. Subordinating the data to concerns about “messaging” is precisely what has so aggravated the doctor’s critics.

Were these efforts to manipulate public opinion even if they conflict with “the science” valuable? There’s a reasonably compelling case to be made for the Platonic ideal of the noble lie, but that kind of messaging comes at a cost. You can’t blame people for noticing and resenting the fact that they’ve been deceived, even if the deception was for their own good. It would be similarly dishonest to dismiss Fauci’s critics as thoughtless Neanderthals merely because they’ve closely followed the doctor’s evolving rationales.

As a result of his own actions, Fauci has made it harder for public health officials to be believed by a critical segment of the unvaccinated population. For the good of his own objectives, to say nothing of the nation’s, Dr. Fauci should consider spending a little less time in the limelight. 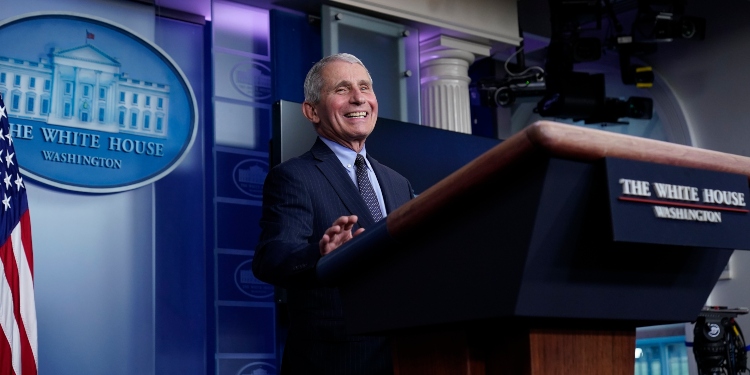