New Hampshire’s primary results only modestly winnowed the field of Republican and Democratic presidential candidates. Given the scope of the 2016 presidential field, every contraction is a boon. A smaller cast of candidates is not the only needed clarity to this muddled political cycle that emerged from New Hampshire. That primary election also helped to quantify in concrete data points the anxiety felt by millions of Americans.

Speaking from personal experience, there is perhaps nothing that irritates Democrats more than the notion that seven years of feckless, divisive, amateurish leadership on the president’s part has helped lead to a populist backlash. In Donald Trump’s case, that backlash is tinged with an unmistakable air of racial angst and cultural revanchism. No one wants to bear any responsibility for that unattractive movement, and it makes sense that Democrats would recoil at the notion that the leader of their party would bear any responsibility for it. The trepidation of the average Trump voter is the natural result of the ballooning terrorist threat abroad, and the belief that the risk posed by proliferating terrorist safe havens was one that Barack Obama was determined to ignore. We now have some firm evidence to support that assertion.

An overwhelming nine out of every 10 New Hampshire Republicans said they were somewhat or very worried about the potential for another terrorist attack in the United States. 90 percent consensus on an issue isn’t simply the result of partisanship or conditioning as a result of watching too much cable news. Among Granite State Republicans, a staggering two-thirds of respondents agreed with Trump that a “temporary” ban on Muslims entering the United States is a necessary measure. Just how temporary this dubious step would be is a matter of some debate. The press release announcing his inflammatory proposal noted that the ban would remain in place “until our country’s representatives can figure out what’s going on.” That seems a bit open-ended, not to mention unfeasible and quite possibly unconstitutional.

This is not a policy to which the American people would warm to without a legitimate cause to fear the infiltration into the United States by radical Islamist sleeper agents with the aim of carrying out terrorist attacks. It isn’t as though this is an invented fear; that is what led to the slaughter of 14 people in San Bernardino by a radicalized Islamist terrorist and his Saudi-educated Pakistani bride whom he met online. It is that same fear of terrorism which has led to a backlash against the refugees streaming out of the Middle East and North Africa – regions torn apart by conflicts the United States and Europe steadfastly refused to contain until it was too late.

James Clapper, the president’s own Director of National Intelligence, testified before a Senate Armed Services Committee hearing on Tuesday that there are today 40 nations that serve as terrorist safe havens, more “than at any time in history.” He warned that ISIS and other radical Islamist terror groups were seeking to infiltrate Western targets by sending terrorists, along with the hundreds of thousands of men, women, and children fleeing the nightmarish conflicts in the region, into Europe. Refugees are not the only sources of concern. ISIS fighters in Syria and Iraq are “pretty skilled at phony passports,” Clapper revealed, “so they can travel ostensibly as legitimate travelers.” At that same hearing, Defense Intelligence Agency Director Lieutenant General Vincent Stewart advised lawmakers that the Islamic State in Iraq and Syria “will probably attempt to conduct additional attacks in Europe, and attempt to direct attacks on the U.S. homeland in 2016.” So, you know. Plan ahead.

The president’s defenders cannot in the same breath label Trump supporters “racists” for supporting a temporary ban on Muslim travelers while at the same time insisting that the administration is doing everything in its power to keep Americans safe. It is not; not, at least, in the regions out of which radical Islamist terrorists have been operating with impunity for years. This White House has allowed this threat to develop as a result of passivity and political calculation, and now they would condemn the American people for noticing it.

The prescription (Trump) may be flawed, but the diagnosis is not. The nation is threatened by terrorism overseas, and the public is not exposing any inherent bias by demonstrating an awareness of the threat, even if their reaction is counterproductive. It would be the height of craven blame-shifting for supporters of this president to survey the extent of our national nervous breakdown and conclude that this 230-year-old republic is simply ungovernable. At a certain point, a full accounting of Barack Obama’s presidency will have to take stock of the political crisis he midwifed and which he bequeathed to his successor. Whoever that may be. 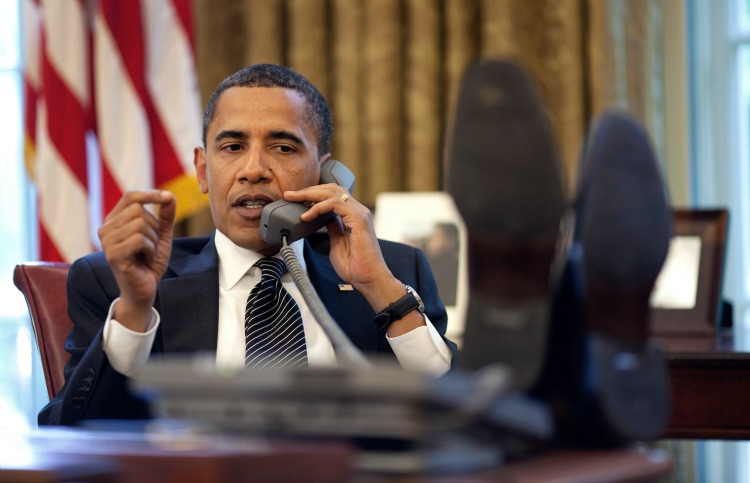