In 2015, the Obama administration implemented an arcane rule that prohibited Internet service providers from charging consumers more for access to certain content providers or providing preferential access to some websites over others: “Net Neutrality.” In 2018, the Federal Communications Commission under Chairman Ajit Pai reversed that rule. Judging from the response, you would think he committed a war crime.

Egged on by entertainers like HBO’s John Oliver, who organized opposition to Net Neutrality’s repeal through his the provocatively named website “GoFCCYourself,” Internet users bombarded the regulatory agency and its chairman with threats and racial agitation. Pai was called a “dirty, sneaky Indian” and warned not to offend those with the “power to murder Ajit Pai and his family.” These intimidation tactics must not have seemed idle to Pai. Protesters set up vigils in the Pai family’s driveway, harassed his wife and children in their homes and around their neighborhood, and put their names on signs accompanied by veiled threats. “They will come to know the truth,” one menacing sign read, “Dad murdered democracy in cold blood.”

In late 2017, the FCC’s headquarters had to be evacuated ahead of a scheduled vote on Net Neutrality’s repeal. A few months later, Pai canceled a scheduled appearance at the Consumer Electronics Show due to a credible threat to his safety. All this over the lifting of an obscure and relatively new regulation that utterly defied simple explanations? You’d be agitated too if you listened to the calamitous predictions surrounding Net Neutrality’s repeal.

Pai was deemed the “man who killed the Internet.” He was guilty of conducting his agency in an “aggressive, condescending, undemocratic, and potentially fraudulent manner” that defied “both convention and ethics.” He was the man “who could destroy the open Internet” by allowing Internet providers to charge users via tiered access plans that could result in slower Internet speeds for those who didn’t cough up extra cash.

“If we don’t save net neutrality, you’ll get the Internet one word at a time,” Senate Democrats warned in an obnoxious, vertically-aligned tweet to emphasize how burdensome using the Internet would be in the Pai era. Democrats were joined by Internet content providers large and small in opposition to the regulation’s repeal, and lawmakers warned that this revolutionary medium would be forever worsened unless Republicans joined in the Democratic effort to “#SaveTheInternet.” For both consumers and innovators, the forecast was nothing short of apocalyptic.

One year after the FCC vote and six months after Net Neutrality’s repeal took effect, we can begin to assess the damage this Trump administration policy has done to the Internet. Though it may surprise Net Neutrality’s most vigorous defenders, the new status quo isn’t half bad. “Broadband download speeds in the U.S. rose 35.8 percent and upload speeds are up 22 percent from last year,” read a report from the technology blog Recode citing data from the Internet speed-test company Ookla. In fact, they ranked the United States as having the seventh fastest broadband in the world. Mobile networks, too, have seen an overall increase in data speeds.

Broadband providers have not taken any new steps to stratify the Internet for haves and have-nots—at least, not yet. Nor have they tried to limit access to unfavored content providers, and ISPs have not begun charging their customers tiered rates for access to premium data in ways that do not comport with Obama-era rules.

Wired Magazine reporter Klint Finley suspects that Internet providers are merely lying in wait. The opposition to Net Neutrality’s repeal was so fierce and Democratic lawmakers so resolved to restore the regulation via legislation that it would be foolish to antagonize them now. But why, then, would Internet providers have failed to make the most of their newly advantageous position when Net Neutrality’s opponents occupied both Congress and the White House?

The fact is that Obama-era regulations forced ISPs to pare back capital expenditures that would have previously been dedicated to wireline and wireless technology to meet new compliance and legal costs (a decline in investments of 12 and 8 percent, respectively). Today, USTelecom reports that broadband investment is back on the rise. And with the Federal Trade Commission once again empowered to take action against deceptive or unfair practices in an industry that is operating in a more competitive environment, the likelihood that ISPs would deliberately price consumers out of an aggressive marketplace is relatively low.

As is so often the case, what drove Net Neutrality’s most fanatical defenders to extremes wasn’t a full understanding of this particular regulatory mechanism but a paranoid fear of the marketplace. They held tightly to a superstitious fantasy in which producers take maximum advantage of their consumers even at the expense of future profits, but it is the government that most often rigs rig the marketplace. If Ajit Pai and his loyal cabal of mustache-twirling capitalist caricatures plan on destroying the Internet, they’re taking their sweet time. 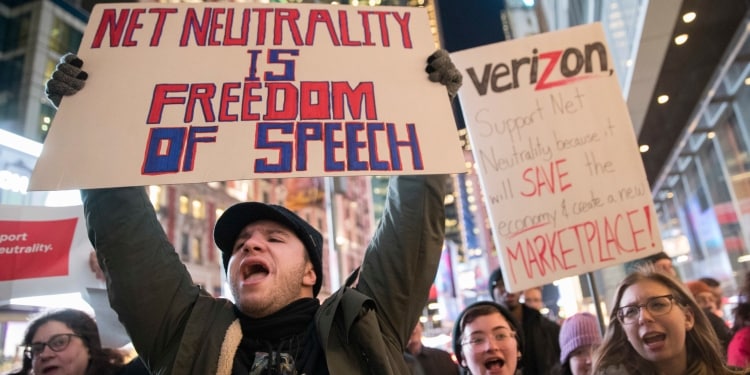