It doesn’t take much to establish and enforce a consensus around a pearl of conventional wisdom these days, and we have been woefully underserved as a result. Today, another critically unexamined but fashionable opinion is upon us. It is leading the Biden administration toward the vigorous execution of one of its chief policy priorities: That is the idea that Americans want out of Afghanistan, and they want it yesterday. They don’t care how we get to that preferred outcome; they just want out. And they’re willing to absorb any costs along the way.

In April, Joe Biden announced his intention to seek the withdrawal of all U.S. and NATO forces from Afghanistan by an auspicious date, September 11, 2021. Withdrawal would be entirely unconditional, independent of the conditions on the ground. American military commanders objected. A pullout that dramatic would risk U.S. gains and force local interests to accommodate the Taliban as it seeks a return to power. But Biden held firm. This month, the president accelerated the timetable for withdrawal. All American troops are now on track to leave this Central Asian nation no later than mid-July.

But the Pentagon was right to worry. As the New York Times reported, since U.S. forces began their withdrawal, the Taliban has filled the vacuum that’s been left behind. Since May 1, at least 26 outposts in four Afghan provinces have surrendered to fundamentalist insurgents, taking government forces hostage and securing critical intelligence along the way.

The restoration of the Islamic Emirate of Afghanistan seems a foregone conclusion now. America’s allies are shutting down their diplomatic missions in Kabul, and the Afghans credulous enough to trust America’s commitment to their safety are scrambling to get out before the old guard returns to kill them. Administration officials still have no clear idea how to prevent Afghanistan from once again incubating the kind of terrorists that attacked the U.S. 20 years ago, or even whether the U.S. will provide air support for the Afghan forces still capable of fending off the Taliban.

Make no mistake, this is an American defeat. But the unduly self-confident arbiters of America’s political discourse are convinced that the voting public will be just fine with it.

Americans are exhausted from the Afghanistan conflict, the polls suggest, even if they’re not following the situation all that closely. Many–Democrats, primarily–are convinced that the conflict had been a costly error from the start, and few could tell you what has really been accomplished by our presence there. At least, that’s how those who favor withdrawal justify their own predilections.

But those polls could be misleading. As Brookings’ researchers, Madiha Afzal and Israa Saber, recently observed, fewer and fewer Americans even respond to questions involving the troop presence in Afghanistan. “In previous polls, one conducted by the University of Maryland in October 2019 and the other by YouGov in 2018, approximately one-fifth of respondents opted not to answer questions about troop levels in Afghanistan,” they noted.

And those who do choose to weigh in on the matter are more ambivalent about it all than you might think. In 2019, one poll found that only one-third of Americans backed “a rapid and orderly withdrawal of all troops from Afghanistan.” Last fall, another poll found that just 34 percent supported troop withdrawals, as long as they were buttressed by a counterterrorism agreement with the Taliban (which has since failed to materialize).

Sure, public opinion may be more ambivalent than you’ve been led to believe. But the time has come to get out, with or without public support, right? The blood and treasure invested in Afghanistan over 20 years are more than enough, a familiar refrain contends. But the public’s growing ambivalence toward the conflict reflects the declining costs associated with America’s advisory commitment to Afghan security.

Since 2001, the number of U.S. deaths in Afghanistan totals just over 2,300, with about 20,000 soldiers wounded. Combat-related casualties suffered by the tiny 2,500-solider U.S. footprint in Afghanistan are relatively rare today. And as for treasure, U.S. military operations over the 20 years we’ve spent in Afghanistan total roughly $825 billion. Not exactly small change, but the federal government today talks about spending $1 trillion over the course of a weekend like it’s nothing, much less 20 years–and on projects with prospects for success not nearly as defined as the West’s mission in Afghanistan.

Ultimately, what keeps those invested in American geopolitical hegemony and domestic security up at night is the prospect that we won’t be gone from Afghanistan for long. We’ll be back, at a time and place not of our choosing, when it once again becomes a terrorist haven. After all, that’s what happened in Iraq in 2014, the last time Washington deemphasized strategic goals in favor of political narratives. “We’ve seen this movie before,” said Defense Sec. Lloyd Austin. And we know how it ends.

Those who refuse to question their own certainty about how the future will unfold don’t seem all that concerned about the political fallout that will settle over the American landscape following our capitulation in Afghanistan. They seem to think voters are in the mood to be defeated. They have not considered the potentially far-reaching psychological effects that may follow from watching the collapse of everything Americans spent a generation working toward in Central Asia. They don’t believe there will be any repercussions when the Taliban forces women and girls back into the shadows, tortures the Afghans who worked with American forces but couldn’t get out in time, and overruns American outposts and diplomatic missions. They don’t think anyone will care when the instruments of American power are foisted over the shoulders of jihadists as trophies—forcing us to confront the symbols of America’s inexorable decline.

And maybe they’re right. But what if they’re wrong? 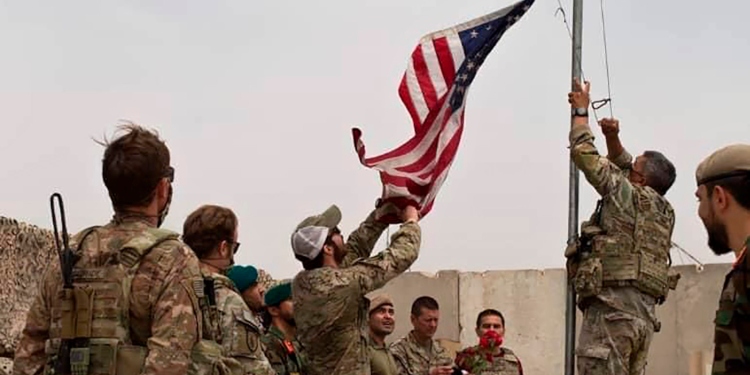