The preferred lie of the moment seems to be that the left’s naked culture warring is not, in fact, naked culture warring. Progressives aren’t seeking to overturn the existing social compact, this conflict’s belligerents insist. They are only bringing about our inevitable destinies.

Thus, liberals convince themselves that the redefinition of “infrastructure” means whatever they want it to mean—from “caregiving,” to the shackling of independent contractors, to federally mandated paid time off work. They produce constitutionally dubious measures that would compel the Federal Reserve to get into the “racial justice” business and compel local governments to discriminate on the basis of race when disbursing public benefits. They redefine classic definitions of gender to allow transgender women to compete on girls’ sports teams despite the well-documented damage that does to biologically female competitors.

None of this is “culture warring” according to prominent figures in the media landscape. It’s only culture warring when Republicans notice these efforts and resolve to do something about them. According to the press, the culture is a Republican fixation. To consume coverage of Democratic initiatives is to be confronted with an explicitly ideological effort to silence dissent, as is the case with the press’s attempt to arbitrarily redefine “gender reassignment” or “sex reassignment” procedures as “gender-affirming” or “gender-confirming” therapies. It’s a wonder how media would describe the rare but not nonexistent phenomena of transgender individuals transitioning back to the gender of their birth. Do these individuals deny their own genders? Is it media’s job to render such a judgment?

All this gaslighting is enough to drive you a little mad. So, it is understandable, if not excusable, that the American right has resolved to fight this fire with fire; using the levers of government they control to promote their own ideological objectives. That mission has been accompanied by an effort to impose ideological homogeneity on dissenters within the Republican coalition. Thus, Arkansas Gov. Asa Hutchinson finds himself in the hot seat.

Last week, the governor vetoed legislation that would have made the state the first in the nation to prohibit doctors from providing hormone blockers to or performing gender-reassignment surgeries on people under the age of 18. His objections were clear: The legislation was overbroad insofar as it criminalized conduct that is the exclusive province of the “parent, child, doctor-patient relationship.” Moreover, the bill did not grandfather in individuals who were already receiving such treatments, forcing doctors, parents, and transgender youth to either violate the law or risk potentially dangerous medical complications. “If H.B. 1570 simply prohibited gender reassignment surgeries for minors, reaffirming the present state of affairs, then I would have signed the bill,” Hutchinson wrote.

But most of all, the governor said, he could not abide this legislation because it violated conservatism’s first principles. Namely, the “fundamental question” of whether this “is this the right role of government.” On Sunday, Hutchinson told NBC’s Chuck Todd that he is sympathetic to the right’s concerns and understand that the “fear is about the future, and the fear is that we’re losing our culture.” But to use the instruments of law to pursue cultural objectives, as Democrats have, is to sacrifice the GOP’s commitment to the “principles of limited government” and the “freedom of choice.”

With this restatement of principle, Hutchinson made enemies of everyone. Having convinced themselves that they caught the governor in an act of hypocrisy, the left attacked Hutchinson for failing to veto a law that prohibits biological males from playing in girls’ and women’s sports. The Trumpian right, including Trump himself, savaged the governor for balking at this measure but approving legislation that proscribed female genital-mutilation surgery. Moreover, as Fox News Channel host Tucker Carlson insisted, the governor had effectively consented to subjecting minors to “chemical castration.”

Both arguments leave a lot to be desired. Hutchinson’s Swiftian articulation of the harm principle has confused the left only because it substitutes real, measurable harm with the conjectural sort. To leftist thought, denying biological males access to women’s sports could be the source of psychological trauma in transgender individuals. But the left discounts the actual trauma suffered by women whose performance and  associated rewards must now be measured against people who are not their physical equals.

Similarly, the right has become convinced that Hutchinson effectively consented to gender-reassignment surgery for children. In fact, such procedures are already age-restricted. There are plenty of valid concerns surrounding the long-term effects of hormone blockers in pubescent youth, but that’s not the argument the anti-Hutchinson right is making. Like the left, it has rested its argument on the conjectural—indeed, hypothetical—prospect of harm over and above the very real harm the state has imposed on the handful of youths to whom this therapy is prescribed.

More troubling, though, the right has simply dismissed Hutchinson’s compelling political argument. “To me,” the governor said on Sunday, “it’s about compassion, but it’s also about having the laws make sense and the limited role of government.” The idea that compassion is consistent with limited government isn’t just what every conservative genuinely believes. It’s also a valid and persuasive argument in favor of conservative politics. The alternative—an argument to which the post-Trump right seems inclined—is to sanction the left’s tactics. They, too, would utilize the power of the state to impose their values on the public. If the right chooses not to contrast both its values and the methods by which it would pursue them with progressives, we will be left with two parties that reject persuasion in favor of coercion. The only question before voters will be whose coercion you prefer.

Unfortunately, Hutchinson has lost the argument. The Arkansas legislature swiftly overrode his veto, and his brand of laissez-faire conservatism has been the subject of withering scorn in the right-leaning press. Republicans have convinced themselves that America doesn’t need two parties with distinct views on the morality and prudence of big government. The province of government is ever-expanding and unchecked, and Republicans are providing their opponents with tools they would otherwise have to fight to secure.

Republicans are betting that Americans only care about values, not the means used to achieve them, and that their values are more representative than the values espoused by Democrats. They don’t seem to have considered the horrors they will be complicit in unleashing if they lose that bet. 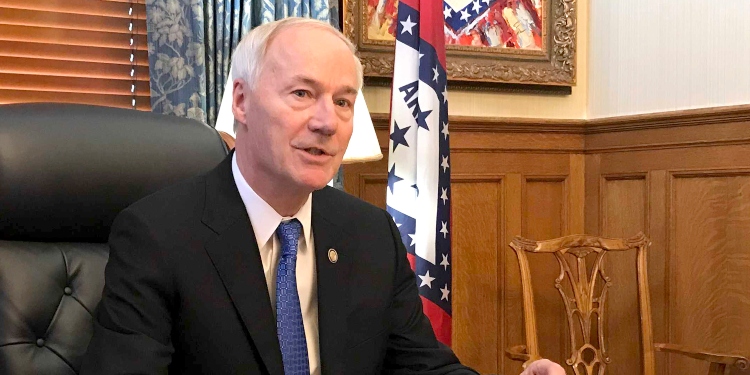