When Myanmar’s de facto leader, Aung San Suu Kyi, took to the lectern on Tuesday, she was speaking to us. Suu Kyi’s silence as hundreds of thousands of Rohingya Muslims are driven from their homes amid a campaign of state-sponsored pogroms had been deafening. When Suu Kyi finally addressed the issue, she spoke in perfect English to the international community, but she was not being entirely honest.

Over the space of just weeks, at least 420,000 Rohingya civilians have fled their Rakhine State villages amid cycles of violence and counter-violence. Thousands more are trapped, besieged and surrounded by hostile Rakhine Buddhists and the government has denied their petitions for safe passage out of the area despite claims that supplies of food have dwindled to starvation levels. Hundreds have died either in transit or conflict, and the humanitarian conditions threaten to deteriorate further.

Suu Kyi insisted that it was not the intention of her government “to apportion blame or to abnegate responsibility.” She observed that her regime has not yet been in power for a full 18 months and still has limited control over junta-led ministries like defense and border affairs. “After several months of seemingly quiet and peace, on 25 August, 30 police outposts . . . were attacked by armed groups,” Suu Kyi added, apportioning blame. She bristled with indignation at international monitoring bodies that have focused only on the plight of local Muslims and not smaller minority groups that have also been made refugees and “of whose presence most of the world is totally unaware.”

“Since 5 September, there have been no armed clashes, and there have been no clearance operations,” she insisted, which is an outright lie,  according to Suu Kyi’s own information committee. She claimed the Rakhine Muslims have access to all essential and non-essential state services, but they do not. The Rohingya are denied citizenship and are clustered in camps when they are not fleeing to Bangladesh for their lives. “Myanmar does not fear international scrutiny,” Suu Kyi insisted. While a handful of journalists have been allowed access, organizations like Doctors Without Borders say they have not had access to Rakhine State since August. Indeed, NGO staffers are afraid to travel to the region because Myanmar officials have accused humanitarian organizations of colluding with local militant groups.

Suu Kyi’s prickliness amid allegations of brutality, prejudice, and ethnic cleansing is a bitter pill to swallow. Burma’s democratization, culminating in Suu Kyi’s release from house arrest and, eventually, her free election to serve as the head of a quasi-civilian government seemed like a genuine move toward liberalism.

That country’s thaw appeared such a bright spot that Hillary Clinton cited her successful efforts to open Naypyidaw frequently in her quest for the Democratic nomination.  “While the Arab Spring was losing its luster in the Middle East, Burma was giving the world new hope that it is indeed possible to transition peacefully from dictatorship to democracy,” Clinton wrote in the chapter she dedicated to Myanmar’s transition in her 2014 book, Hard Choices.

In 2011, Clinton traveled to Burma where she appeared beside Suu Kyi. “It was incredibly emotional and gratifying to see her free from the many years of house arrest,” she said. For her part, Suu Kyi played the part of non-violent democratic resistance figure and pledged that “there will be no turning back from the road to democracy.” Following a landslide victory for Suu Kyi and her democratic opposition in 2015, Clinton took her share of credit. “It was also an affirmation of the indispensable role the United States can and should play in the world as a champion of peace and progress,” she said in a statement.

Clinton was in very good company in praising Suu Kyi as a leading light for the cause of freedom. “This is a fitting tribute to a courageous woman who speaks for freedom for all the people of Burma, and who speaks in such a way that she’s a powerful voice in contrast to the junta that currently rules the country,” President George W. Bush said signing a bipartisan bill awarding Suu Kyi the Congressional Gold Medal in 2008.

In 1991, she won the Nobel Peace Prize “for her non-violent struggle for democracy and human rights.” Following her release from house arrest, she traveled the world lecturing as a Nobel laureate on the primacy of the rule of law and the necessity of democracy “for the guarantee of human rights.” Today, she presides over what a Yale University Law School study claims amounts to genocide.

Maybe the pressures and political realities of running a democratizing state alongside a tenacious junta have been underappreciated, both by Suu Kyi and her detractors. Perhaps the facts on the ground tie her hands, and she must meekly defend the actions of her military as it commits atrocities against oppressed minorities. Either way, Aung San Suu Kyi is a crushing disappointment. 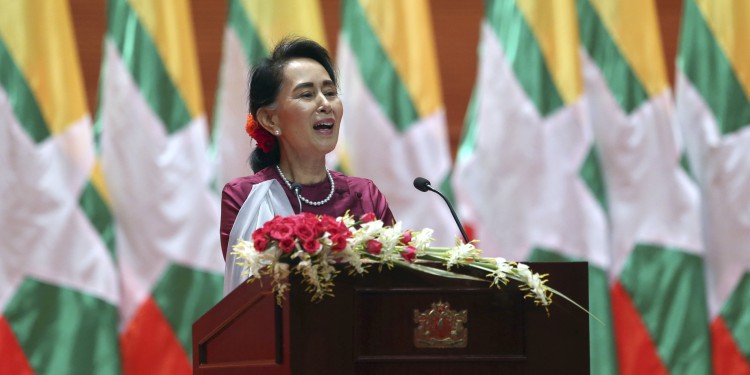