It was only six months ago that Democrats surged to their largest margin of victory in a midterm election in American history, but it feels like a lifetime has since passed. In the months following the election, the Democratic Party’s internal deliberations have hung on precisely how far to the left its members are prepared to drift. The Green New Deal, Medicare-for-all, a federal employment guarantee, universal basic income, slavery reparations, “wealth” taxes, lowering the voting age to 16, “free” college, a national gun registry; Democratic successes at the polls have made them giddy.

Given this dynamic, you could be forgiven for thinking that the Democrats’ resounding 2018 victory was the result of a resonant, coherent, and profoundly progressive message. After all, figures as lofty as Senate Minority Leader Chuck Schumer warned Democratic lawmakers that his party “can’t just be anti-Trump” if it wanted to win—they had to be for something. But Schumer’s party didn’t follow his lead. By and large, the Democrats who’ve won in the Trump era have tailored their message to their districts, shying away from policy specifics and preferring instead to capitalize on being the “anyone” in “anyone but Trump.” By contrast, many of the overtly progressive candidates who campaigned in purple states and districts lost.

This revisionism is, in part, a function of media’s bias toward the controversial. Alexandria Ocasio-Cortez and Ilhan Omar, attention-seekers both, will always generate more attention than Conor Lamb and Katie Hill. That also explains why senatorial losers like Beto O’Rourke and Stacey Abrams never left the limelight while the first Democrat to be elected to the U.S. Senate from Arizona since 1988, Kyrsten Sinema, hasn’t received the soft-focus treatment.

The popular fixation on the ascendant progressive movement within the Democratic Party has certainly obscured the party’s true ideological center of gravity, which is more moderate and favorable toward compromise than its progressive fringes and their boosters in the press would prefer. This may also have confused Democrats as to precisely how popular their policies are. The Australian experience may prove enlightening for those Democrats who want to be informed.

Poll after poll showed only one thing: Australia’s left-leaning Labor Party was poised for a comeback, and it wasn’t going to be especially close. Not only had voters soured on the governing center-right coalition government, but they had supposedly warmed to the left’s program: a broader social safety net, higher taxes, and radical efforts to mitigate the threat posed by climate change. Surveys showed that up to six-in-ten Australians favored “taking steps now” to combat global warming “even if this involves significant cost.” This election was to be the culmination of a building public anxiety, and it was in a way. But the fear Australia’s voters expressed in the voting booth wasn’t over climate change but how Labor had promised to address it.

A New York Times analysis of the surprising success of the Australian right reads like an analysis of the Democratic Party’s predicament. Labor’s educated, well-to-do voters were responsive to a radical reduction in carbon emissions that was projected to cost the country up to 167,000 jobs and hundreds of billions of dollars, but the party’s working-class voters weren’t sold. It was their jobs that were on the chopping block, after all. But why didn’t the polling reflect this trepidation? What happened to the consensus around both the threat posed by climate change and the need for dramatic reforms to stave off the worst? Maybe it never existed in the first place.

Voters lie to pollsters. They over-report their voting histories, conveniently forget voting for the loser in the last election, and tell pollsters what they think they want to hear—particularly if the expected answer comports with preferred social conventions. In America, Democrats tell pollsters that they prefer a party that’s more “moderate,” which sounds nice and accommodating, but they also claim they support a progressive policy agenda. They want a broader entitlement state and higher taxes to support it. They see climate change as an urgent threat, and cost is no issue when evaluating proposals for dealing with it.

This contradiction cannot be reconciled, so Joe Biden seems to be prepared to test it. In a field of candidates all vying to lay claim to progressive bona fides, Biden has all but rejected the party’s leftward drift. He has described Donald Trump as an departure from, not the apotheosis of, conservative thought. He’s promised to work with Republicans toward shared legislative objectives, not to bury them under an avalanche of snark and opprobrium. He’s rejected unworkable progressive proposals like Medicare-for-all and a government-provided basic income. He’s refused to apologize for his record on criminal justice issues, unlike many of his competitors. Even Biden’s climate-change plan is aimed at securing a “middle ground” solution to the issue. “This is a deal breaker,” Alexandria Ocasio-Cortez wrote. Maybe it is for her, but it hasn’t been for Democratic voters yet.

Surely, Joe Biden is trading on Democratic nostalgia for the Obama era. Further scrutiny and unforced errors on the campaign trail may chip away at the former vice president’s sizable early lead. But no candidate for the presidency stakes out positions as divergent as Biden’s on a lark. Maybe, as seems to have been the case in Australia, voters know what is expected of them. They know they are supposed to adopt a posture of socially desirable deference when it comes to climate change. They know they’re supposed to support the fresh-faced progressives who advocate draconian solutions to the problem. They just don’t always behave like they’re supposed to. 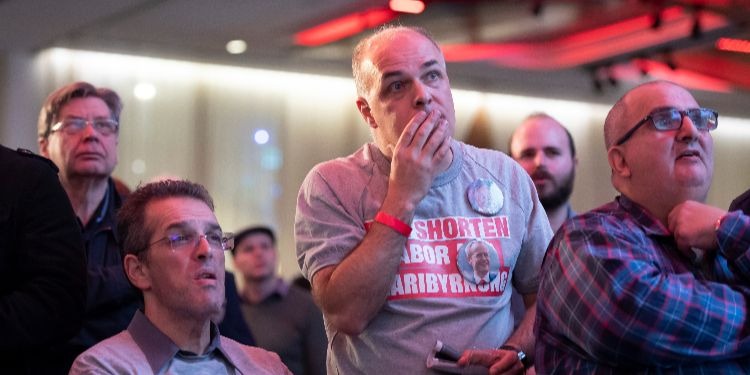