There was no red wave in 2022. Despite the unpopularity of the sitting president and his party, a national malaise owing to a growing sense of precarity among voters, and polling that found an almost uniform Republican advantage across the country, the GOP turned in a shockingly underwhelming performance at the ballot box. In the end, Republicans are still expected to retake control of the House of Representatives, but only by the narrowest margin. Democrats are giddy. Republicans are depressed. The conflicts that consumed the first two years of Joe Biden’s presidency will persist unresolved. It’s 2021 all over again.

Republicans who are inclined to do any soul-searching are likely to be those who see the voters’ verdict as an indictment of the GOP’s populism and its tendency to nominate incendiary neophytes to high office. Despite the handful of exceptions that prove the rule, the Republican newcomers who earned Donald Trump’s endorsement cost the GOP winnable races in states such as Pennsylvania, Arizona, New Hampshire, and elsewhere. Republican House candidates of the election-denying variety helped embattled Democrats beat back this year’s political headwinds. The GOP’s survivors, as of this writing, are those who can lay a convincing claim to some degree of conventionality.

A substantial portion of the Republican Party long ago resigned itself to the inevitability of the populist takeover, but those debates are no longer settled. There will once again be open repudiations of Donald Trump and Trumpism within Republican ranks. The GOP will once again re-litigate the former president’s fantasies about the fraudulence of the 2020 vote in the light of their self-evident toxicity. The party may once again commit to a zero-sum conflict over whether it can survive as a working-class vehicle or if that sacrifices too many affluent, degree-holding voters in America’s must-win suburbs.

As for Democrats, say goodbye to the gentle efforts by anxious liberals to push Joe Biden off the political stage. His obvious and intensifying decrepitude notwithstanding, Biden isn’t going anywhere. The 46th president weathered a historic storm, defying expectations set by decades of political precedent. He’s earned the deference of his party, and he’ll get it. Moreover, all the Democrats who rattled the cages of progressives and insisted their party had governed too far to the left despite the dubiousness of their mandate will take a back seat. There will be irresistible pressure on the party’s moderates to swallow their anxieties about the direction in which the party is headed and keep their objections to themselves. There will be little appetite on the left to read these results as victory by default and to govern accordingly.

All this means that the issue set that should have helped the GOP this year is preserved in amber. Divided government, if that’s what we get, will put an end to the legislative phase of Joe Biden’s presidency, which means there will be no more multitrillion-dollar spending sprees. That will send a positive signal to markets, and it may put some downward pressure on inflation. But economists expect a recession in 2023, and Democrats will be the governing party that navigates it.

The success of down-ballot Democrats ensures that there will be no major push to rethink crime prevention and the prosecution (or lack thereof) of violent criminals. There will be no legislative effort to compel Joe Biden to police the border; no reckoning with the Covid regime and its many excesses; no parent’s revolt on a scale sufficient to scare educational reformers away from imposing mature cultural themes on kids. If these election results impose caution on anyone, it is likely to be Republicans who saw the post-Dobbs environment as an opportunity to pursue restrictions that exceed the national consensus on abortion access. That will all have to wait another two years.

And the next two years begins today. All eyes will settle on Florida Gov. Ron DeSantis, whose state provided Republicans with their one and only unambiguous bright spot on the map this year. Because the debate within the GOP over how to recover from its infirmity will coalesce around the virtues and vices of Trumpism, we’re likely to see a familiar debate around provocativism vs. pragmatism. This is not, however, going to be a contest of Jeb Bush-style conservatism vs. table-flipping nationalism a la 2016; that argument is settled. Republicans are going to struggle with themselves over which version of Ron DeSantis they should hope to emphasize: the popular and effective governor or the culture warrior.

These two iterations of DeSantis are compatible. And they do not preclude courting controversy—DeSantis’s education reform bill (deemed “don’t say gay” by its maligners) is as popular as his more banal initiatives like property-insurance reform. But DeSantis’s appeal to the GOP is now firmly rooted in winning, and quixotic culture wars like the one he and the Florida legislature waged against Disney and the social-media outlets who were mean to Trump do not fit within that rubric.

All this sets us up for two more years that are likely to look a lot like the past two years. It’s not often you get a chance to do it all again—this time, different and better. Republicans might make the most of it, emerging from this setback as a healthier party keen on representing a majority of the country. They could commit to a course that would give GOP voters something more tangible than the satisfaction they derive from owning the libs on Twitter. If history is any guide, however, the GOP will settle in to its stultifying persecution complex. Democrats will misread the moment, just as they have before, and govern with reckless disregard for the popular will. And the rest of us will have to live through it. Again.

The Calm Before the Electoral Storm 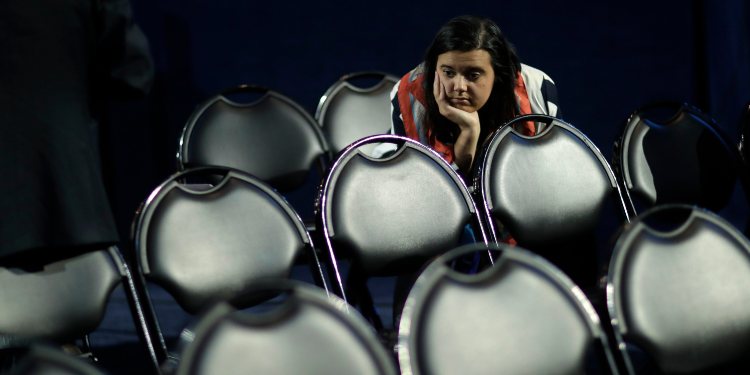 A Total Collapse of Democratic Morale