On his way out the door of the People’s House, former President Barack Obama informed reporters that his time out of the political spotlight might be far briefer than his predecessor’s. Obama warned that he would speak out if he determined there was “systematic discrimination being ratified in some fashion,” or if the press was mistreated (in a manner similar to how his Department of Justice targeted reporters, perhaps), or if his executive actions on immigration were repealed. Basically, Obama told the press to expect his return sooner rather than later. Few guessed, though, that sooner meant just 11 days.

This week, Obama burst back onto the political scene by doing precisely what his critics expected him to do: speaking out about presidential-level politics. In a statement released by Obama’s spokesman, Kevin Lewis, the former president warned that “American values are at stake”—an indirect reference to President Donald Trump’s executive actions on refugees.

The most substance of the three-paragraph statement was found not in Obama’s apparent opposition to Trump’s controversial executive order but in his consternation over the claim that the limited ban on refugee intake is founded upon Obama-era precedents. At the end of this statement, the president groused that Republicans and members of the press were mistaken to draw equivalences between his counterterrorism policies and Donald Trump’s. “[T]he president fundamentally disagrees with the notion of discriminating against individuals because of their faith or religion,” the statement concluded.

Those with vivid memories of how Obama’s administration struggled to defend the imposition of a birth-control mandate upon Roman Catholic nuns in violation of the Religious Freedom and Restoration Act will scoff at this cynical maneuver, but they’re not the audience. Obama is speaking directly to the leaderless Democratic Party he left behind on January 20.

Obama’s statement is an effort to craft a narrative (seven countries does not the Islamic world make, and no one has challenged Trump’s executive order on the basis that it discriminates against an entire religion). It is also, though, an attempt to thwart a damaging political realization from taking root in the Democratic subconscious. Trump’s defenders are right; Obama did leave behind a variety of dubious precedents.

It was his administration and the last Congress that designated the countries in Trump’s executive order as potential threats. Obama did conduct a highly ideological foreign policy designed to reshape America’s dependent relationships. He did weaken the distinctions between the domestic political realm and the supposedly apolitical field of foreign and national security affairs. Augmented by the chaos and apprehension of the last two weeks, a potent nostalgia for the Obama years has clouded the left’s ability to see that Trump is building on Obama’s suboptimal precedents. That conclusion will not elude Democrats forever, particularly when the party is no longer leaderless.

The zeal that led thousands of outraged Americans to crowd airports in an effort to convey their anxiety to Washington was remarkable. Anyone can see that this has the makings of an embryonic political movement. It is directionless, unstable, and without guidance. Few politicians can resist such a temptation, and Obama is no exception. Here, too, the former president is engaging in some legacy maintenance.

Little noticed over the course of the 2016 campaign season was Barack Obama’s effort to take some ownership for the sorry state in which the Democratic Party finds itself. At the legislative level, in particular, Democrats watched for six years as their most promising talent was defenestrated. Obama made a rare push to rebuild the Democratic Party’s farm team, endorsing over 150 legislative candidates and even cutting radio ads and taking photographs with them. It was a wasted effort. 2016 saw the GOP take full control of the legislatures in once reliably blue states like Iowa and Minnesota. In November, the Democratic Party’s last Southern legislature in Kentucky also fell to the GOP.

Eventually, the scales will fall from Democratic eyes. Their gauzy recollections of the Obama years will one day give way to a realization that he presided over the immolation of their party. Obama knows this. Why else would he commit himself to a course defined by such smallness? The president, the most powerful man on earth, was reduced in his final days in office to drumming up enthusiasm for state assembly races. Today, when he should be focusing on building his library and serving as a sagacious ambassador to the world, he lowers himself to offer a muted and impotent burble of opposition to his successor. On Monday, the former leader of the free world endorsed Sophia King in the race for alderman of Chicago’s Fourth Ward.

Obama cannot withdraw from the political realm. If he does, he risks allowing the narrative to get away from him. Any sober liberal reflection on the president’s legacy will necessarily yield to despair over all the opportunities that were lost. So Obama will speak, endorse, and issue statements. He will posture and preen and do whatever he can to make sure the Democratic Party’s next leader is cast in his mold. So long as Obama can fill the silence, Democrats won’t have time to reflect on the president’s legacy. When they finally do, Obama won’t appreciate many of the conclusions they reach. 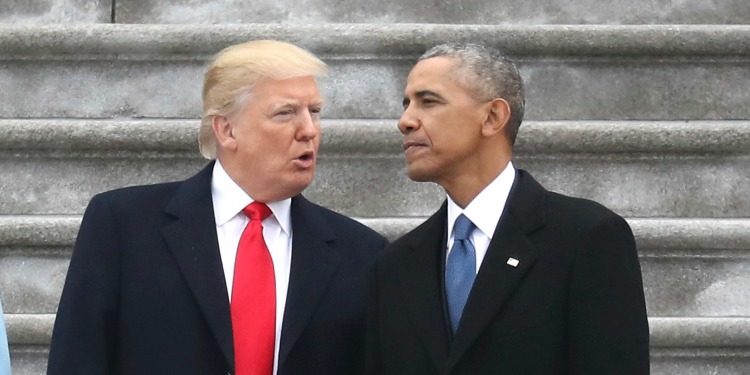