President Barack Obama’s wide-ranging interview with CBS News journalist Steve Kroft was probing to the point that it was characterized by Vox.com’s Max Fisher as “oddly confrontational.” The rest of the liberal publication’s review of the interchange could best be described as damage control, and there was quite a bit of damage to mitigate. The president was outwardly bitter and resentful toward his interlocutor, who protested being “filibustered” by the president. Obama had been robbed of the luxury of clarity and concision by his own inept handling of myriad international crises, and it showed. When asked if he thought the world was a safer place, the President of the United States reluctantly conceded that it was not. More concerning, however, was his contention that the United States is somehow safer, even as the rest of the globe descends into chaos. What else could he say? Events have escaped his control. The president is at a loss.

The backdrop of this interview was the increasingly disastrous situation for the United States and its allies in the Middle East. On Friday, the Department of Defense revealed that it was mothballing the ill-fated program of training and equipping indigenous Syrian rebels. That $500 million initiative succeeded only in creating a handful of soldiers, most of which had been killed, captured, or had defected by September. In what was bizarrely characterized as the bright side to this unalloyed defeat for U.S. interests in the region, the president insisted he never really had any faith in that program to begin with.

“I’ve been skeptical from the get go about the notion that we were going to effectively create this proxy army inside of Syria,” the president asserted. “My goal has been to try to test the proposition, can we be able to train and equip a moderate opposition that’s willing to fight ISIL? And what we’ve learned is that as long as Assad remains in power, it is very difficult to get those folks to focus their attention on ISIL.”

It’s a safe bet that the congressional appropriators who assigned half of a billion dollars of taxpayer funds to this overt program (to say nothing of the covert programs to arm and train Syrian rebels exposed only amid their destruction by Russian forces) would have displayed more skepticism if the president had confessed his doubts at the time. Obama’s criticism of this program is rooted in his desire to pursue exculpation. In criticizing the rebel training program, he was also issuing the veiled condemnation of that program’s early advocates: former administration officials like Leon Panetta, Robert Gates, and Hillary Clinton. The president wasn’t offering a cogent alternative to this proposal for the perfectly good reason that it doesn’t exist.

This prickly interview grew even more hostile when Kroft had the temerity to confront the president with the empirical fact that Russian President Vladimir Putin was blatantly and successfully challenging his leadership and American global dominance amid military interventions in Europe and the Middle East. The president’s response is so delusional that it must be dissected line-by-line.

When he inquired of Kroft with dramatic incredulity precisely how the Russians had challenged his leadership, the president bristled and requested those challenges be itemized and litigated individually. Kroft obliged the president, his list culminating in Russia’s campaign of bombing American-backed proxy forces and CIA-provided weapons depots. “So that’s leading, Steve?” Obama recoiled.

“When I came into office, Ukraine was governed by a corrupt ruler who was a stooge of Mr. Putin,” the president averred. Wrong. When the president entered office, Viktor Yushchenko, the de facto leader of the anti-Moscow Orange Revolution still served as the president of Ukraine. For his consistent opposition to Russian domination, Yushchenko was rewarded with a series of energy crises inaugurated by the Kremlin and was eventually disfigured as a result of acute dioxin poisoning. Some “stooge” he turned out to be.

“My definition of leadership would be leading on climate change, an international accord that potentially we’ll get in Paris,” the president replied. Allow that to sink in.

Even if you’re of the opinion that the amorphous threat of climate change, which exists forever just over the horizon, is of a greater danger to American national security than a nuclear power engaging in kinetic warfare against American-backed forces in a strategically vital part the world – thus rendering you an unserious person — this answer should disturb you. If only because it took the president almost seven years to secure this accomplishment. Following his personal humiliation at the Copenhagen climate summit in 2009, progress on the left’s chief substitute for a national security policy has been halting at best.

The president continued to steal from Americans their peace of mind when he revealed that his administration was aware that something like Russian intervention in Syria was imminent even as he was meeting with Vladimir Putin in New York City in September. “We knew that he was planning to provide the military assistance that Assad was needing because they were nervous about a potential imminent collapse of the regime,” Obama averred incautiously.

The president did not seem to note how his contention contradicted an earlier pronouncement. When diagnosing the fatal flaw that led to the implosion of his rebel training program, the president noted that it was Assad’s persistent clinging to power that prevented the program’s success. Questions remain: Was the Russian assessment of the viability of Assad’s regime accurate? If not, why did the Syrian president himself admit that manpower shortages were hindering the regime’s military operations in August? Does the president’s belief that Assad must be removed if there is to be an effective anti-ISIS ground force mean that American and Russian objectives in the region are fundamentally at odds?

Unfortunately, the answer to these questions was revealed in a cryptic response the president gave to a question about the efficacy of the multi-nation campaign targeting ISIS. “Over time, the community of nations will all get rid of them, and we will be leading getting rid of them,” the president said. “But we are not going to be able to get rid of them unless there is an environment inside of Syria and in portions of Iraq in which local populations, local Sunni populations, are working in a concerted way with us to get rid of them.” And there will be no second Anbar Awakening unless the United States once again serves, to borrow Bing West’s invaluable analysis, as “the strongest tribe” in Western Iraq. In other words, don’t hold your breath.

The inescapable impression that the president gave viewers last night was that his highest priority is not the advancement of American national security priorities but political damage control and face-saving. The Anbar Awakening was an outgrowth of the success of the Iraq surge, and there would have been no surge if George W. Bush had not been possessed of the ability to accept that his original approach to the war in Iraq was a failure. America is again in need of a strategic about-face, but the current president seems unable or unwilling to admit his mistake. 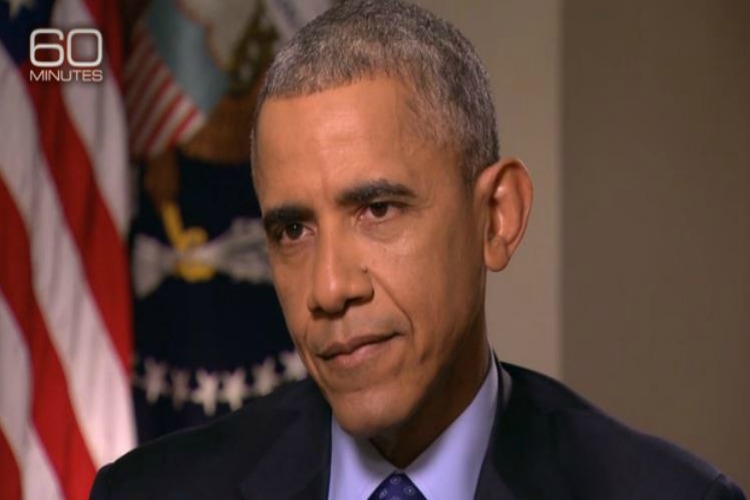