If the results of a two-year investigation into the Benghazi attacks feel politically charged, it is because this is a scandal about the administration’s response in Washington to a deadly attack on a diplomatic compound and CIA annex. For this, Barack Obama’s administration only has itself to blame. That hasn’t stopped Democrats from casting about in a frenetic effort to portray the fruitful and disturbing Republican-led investigation into these attacks as a partisan witch hunt.

The report from House Republicans on the Benghazi Committee is straightforward. The committee found that the U.S. military made no effort to intervene on behalf of the besieged Americans under attack in Benghazi over the course of that 13-hour assault. “Despite President Obama and Secretary of Defense Leon Panetta’s clear orders to deploy military assets,” the GOP report read, nothing was done to save the lives of the Americans who died only after hours of combat. It found that the White House relied on its political advisors and not its national security team to frame public perceptions of this attack so as to preserve the impression that the threat of Islamic terrorism overseas was on the decline.

The committee found that then-United Nations Ambassador Susan Rice, who led the charge to exculpate the White House in the wake of that attack, contradicted and humiliated the State Department. Her appearance on the Sunday morning news programs following that attack betrayed what the Deputy Director of the Bureau of Near Eastern Affairs said was the fact that the White House was  “very worried about the politics” of Benghazi. While the White House remains selective about what it divulges regarding the president’s activities and whereabouts on the night of the attack, the committee learned that Obama declined his daily intelligence briefing the day after. Finally, the investigations uncovered that administration officials, including Secretary of State Hillary Clinton, were convinced of the terroristic nature of the attack even while they were relating something very different about its character to the American people.

That seems simple enough. In the press, however, the race is on to transform the findings of this investigation into something far more complex.

To gauge the level of media investment in the Democratic narrative regarding this investigation, all one has to do is read the second paragraph of NBC News’ dispatch on the subject.

“The 800-page document represents the end of a costly, politically charged investigation led by House Republicans who sought to highlight Clinton’s role in the slipshod response to the attack,” read the report authored by Andrea Mitchell, Alex Moe, and Abigail Williams. “But after more than two years, the report, released Tuesday, instead paints a more nuanced portrait of incompetence.”

One of the reasons the press has deemed this investigation a failure for the GOP is they are committed to the view that the Republicans were engaged in a purely partisan exercise. They are judging it as they would judge a debate—by assessing winners and losers. From that rigid construct, reporters permit themselves to declare the GOP’s presumed target, former Secretary of State Hillary Clinton, a survivor and their efforts a waste.

First, if this were a political fishing expedition designed to harm Hillary Clinton’s image, the idea that the Benghazi Committee’s investigation turned up nothing of note is simply delusional. It was the work of this committee that uncovered the existence of Hillary Clinton’s homebrew email server and the scandalous conduct of a State Department that allowed this breach of protocol and colluded in covering up its existence. Considering the time Clinton has spent defending herself on this issue, the legal jeopardy in which it has thrust her staff, and the damage it has done to her political image, to declare the committee’s investigation both a political exercise and a failure is an example of the wish fathering the thought.

That’s why the Benghazi investigation should not be seen as a political event. Like Hillary Clinton’s secret server, which quite possibly exposed classified American diplomatic cables to foreign governments, the attack was a national security failure. The administration’s response to that national security failure, not this later investigation of it, is the scandal. What’s more, it is a scandal that is intuitively understood by just about anyone of modest political competence. That is, six weeks out from an election, Barack Obama’s White House was more concerned about the politics of the Benghazi attack than they were the security implications.

Democrats can rend garments over the political nature of the House GOP’s report all they want. They can dub the results of the investigation a “conspiracy theory on steroids,” and go off on bizarre fundraising-friendly tangents about Donald Trump in their report on the committee’s findings. Their panicked reaction betrays a justified fear. The investigation paints a pretty clear picture of politicized behavior of the worst variety—one that the public can very easily comprehend. Republicans have Occam’s razor on their side. The very simplest explanation for the White House’s behavior suffices. It is a story of an administration more concerned with winning elections than relating a full and unvarnished account of the deadly attack in Benghazi. Despite all the bluster from Democratic partisans, that’s not “nothing.” 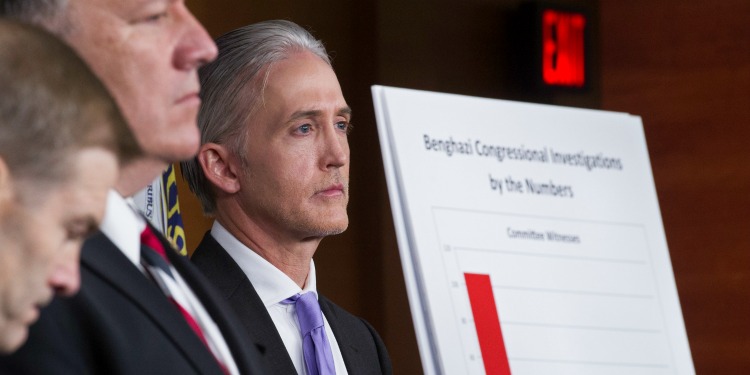