If you were looking to substantiate the inescapable impression that the political press is vastly more sympathetic toward Democrats than Republicans, look no further than the eccentric collectivist senator from Vermont Bernie Sanders and his quixotic presidential campaign. Sanders brings all the baggage and more to the table that former Texas Rep. Ron Paul and Missouri Senate Candidate Todd Akin lugged with them into the 2012 election cycle, and yet the nation’s political reporters cannot identify a single thing that the surging socialist says about his party as a whole. The press’s collective refusal to identify “the Democrats’ Bernie Sanders problem” says all that you need to know about that increasingly activist enterprise.

Political reporters find themselves newly enthralled by Bernie Sanders’ effort to create a contrast with Hillary Clinton’s low-key style of campaigning by organizing massive rallies in stadium-sized venues situated in left-of-center cities like Portland, Maine, and Madison, Wisconsin. Crowd sizes, while not even remotely indicative of future electoral performance, are captivating symbols. Few in the press have, however, remarked on the decidedly monochromatic nature of those packing stadium seats to see the Democratic presidential candidate – these being virtually all-white crowds in predominantly white cities. Fewer still have speculated about how these crowds, uniform in both ideology and skin tone, reflect on the Democratic Party’s ascendant progressive wing.

“He’s been to Portland, Maine, he’s been to Portland, Oregon, Madison, Wisconsin, in Iowa, in New Hampshire, and he’s consolidated that white progressive vote,” Meet the Press moderator Chuck Todd remarked on Tuesday. “This is what Bill Bradley did. Gary Hart did it. Paul Tsongas did it.” He noted that the Clinton campaign can take this development in stride so long as Sanders’ crowds fail to become more “diverse,” but he demurely declined to speculate about what the Vermont senator’s predominantly white progressive support says about him, his campaign, or the Democratic Party’s activist base voters. This was charitably coy on Todd’s part, but it is safe to assume that the same courtesy would not have been extended to a phenomenon candidate on the right enjoying a similar surging in the polls.

That is not the only bit of deference by the political press from which Sanders has benefited. The avowed socialist politician’s economic views are objectively anachronistic, but they have not generated the same scorn as have those of the famously libertarian, hard money advocate, Ron Paul. “Paul apparently thinks that the best approach to a 21st century globalized economy is a return to banking practices of the 19th century,” The USA Today editorial board scolded in January of 2012. No word from USA Today on the century in which Marxist-Leninism’s economic prescriptions belong.

For all the contrived efforts on the part of Democrats and their allies in the press to make Todd Akin the face of the GOP in 2012, despite his narrow ascension to the party’s senatorial nomination in the Show Me State, few in the press have noted that Sanders once held similarly antediluvian views on women’s health and sexuality that could harm his party’s standing. This week, the New York Times revealed that, in the late 1960s, Sanders wrote in the revolutionary left-wing Vermont paper, the Freeman, that cervical cancer was an unfortunate side effect of ungratifying sex.

“[H]e cited studies claiming that cancer could be caused by psychological factors such as unresolved hostility toward one’s mother, a tendency to bury aggression beneath a “facade of pleasantness” and having too few orgasms,” the Times reported. “‘Sexual adjustment seemed to be very poor in those with cancer of the cervix,’ [Sanders] wrote, quoting a study in a journal called Psychosomatic Medicine.”

One only has oneself to blame after being led astray by a medical journal that calls itself “psychosomatic,” but Sanders lapse would be excusable if it were only one instance. A Mother Jones investigation revealed that Sanders also penned a thought piece for the Freeman investigating the nature of gender roles in which he indulged in a series of almost graphic rape fantasies.

“A man goes home and masturbates his typical fantasy. A woman on her knees, a woman tied up, a woman abused.

“A woman enjoys intercourse with her man — as she fantasizes being raped by 3 men simultaneously.
…
“Have you ever looked at the Stag, Man, Hero, Tough magazines on the shelf of your local bookstore? Do you know why the newspaper with the articles like ‘Girl 12 raped by 14 men’ sell so well? To what in us are they appealing?”

Had a Republican candidate for the presidency (or the U.S. Senate, for that matter) indulged in this manner of self-gratifying sexual assault fantasy – literary exercise or no – they would be made to account for it if only to tar the party with which they identified as unfriendly toward women. But Sanders, being a nominal Democrat, has his politically incorrect short story “explained” by the likes of National Public Radio.

“One way to read the essay is that Sanders was doing (in a supremely ham-handed way) what journalists do every day: draw the reader in with an attention-getting lede, then get to the meat of the article in the middle,” NPR’s Danielle Kurtzleben soothingly averred.

“Nobody honestly believes that Bernie Sanders is a sexual pervert or that he is a misogynist or that he intends to do women any harm,” National Review’s Charles C. W. Cooke wrote, admirably advising conservatives to take the high road in regards to the revelations about Sanders’ youthful essays. “Nobody suspects that he harbors a secret desire to pass intrusive legislation or to cut gang rapists a break. Really, there is only one reason that anyone would make hay of this story, and that is to damage the man politically.”

Correct. That is precisely why Democrat-aligned media figures did what they did with regards to Akin’s rape comments, compelling every politician with an “R” after their name to condemn his remarks or be implicitly associated with them. Commentators like Cooke can, and probably should, avoid the naked narrative setting in which the media indulged in 2012. That doesn’t mean the double standards the press sets for their own conduct should be summarily dismissed.

Democrats do not have a “Bernie Sanders problem” any more than the GOP had a “Todd Akin problem,” but the fact that the political media embraced one narrative but has apparently rejected the other outright exposes quite a bit about the ailing state of that industry. 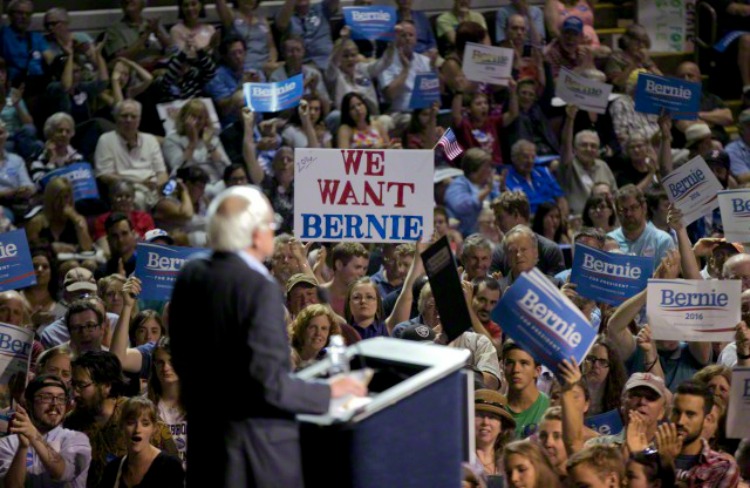