Nobody forced Bernie Sanders’s campaign to endorse Jeremy Corbyn’s Labour Party. By the time the Sanders camp’s national organizing director, Clair Sandberg, announced that the Vermont senator’s team stood in solidarity with the far-left British candidate, it was already apparent that Corbyn’s party was likely to lose and lose badly. And that’s precisely what happened.

On Thursday, British voters delivered Labour its worst defeat in 85 years. The thrashing it endured was less attributable to the lingering debate over the U.K.’s withdrawal from the European Union than to Labour’s uniquely repulsive leader. When 100,000 British respondents were asked what they feared most about the prospect of a Labour government, all but the staunchest Labourites and Remainers indicated that the prospect of Corbyn’s ascension to 10 Downing Street was an unacceptable risk.

Corbyn rendered his party toxic. His penchant for standing in solidarity with terrorists and anti-Semites opened a seal out of which a cascade of anti-Jewish sentiments poured, engulfing his party in scandal. His brand of radical socialism was insufferably hidebound. His expressions of sympathy for history’s greatest criminals were thoughtlessly dogmatic. The Labour Party under Corbyn drifted so far toward overt Jew-hatred that Britain’s chief rabbi denounced the institution. The Archbishop of Canterbury agreed with that assessment, as did 85 percent of the country’s Jews. There was no ambiguity here.

So there were many obvious risks and few upsides associated with the Sanders endorsement. And yet, his campaign did it anyway. We can only conclude that this was not an act of political shrewdness but a genuine display of affection.

Bernie Sanders has thus far evaded scrutiny over the values he and his campaign share with the Labour Party’s discredited leader, but that lack of curiosity is indefensible. As of this writing, Sanders is firmly in second place in the average of national Democratic primary polls. He’s in second and gaining in Iowa, too, and is leading in New Hampshire. Sanders is a contender, and it’s time for the press to act like it. But taking that job seriously would entail an examination of the senator’s conspicuously Corbyn-esque instincts, to say nothing of the bigots with whom he has surrounded himself.

Don’t take my word for it; take that of Sanders’s own surrogates. Rep. Ilhan Omar, one of Sanders’s most visible endorsers with whom the senator frequently shares the stage, has apologized for some of what she’s admitted were anti-Semitic remarks. Or, if that’s not good enough, take the Democratic Party’s verdict. Those anti-Jewish slights for which Omar declined to show remorse had been targeted by her fellow caucus members for censure before a revolt of the party’s progressives and Black Caucus Members scuttled the initiative.

Amid the failed Democratic effort to condemn Omar, Sanders’s foreign-policy adviser, Matt Duss, attacked the maneuver as one purely designed to “police criticism of Israel.” It is worth recalling that the remark Duss considers scrutiny of Israel was Omar’s claim that pro-Israel lawmakers exhibit an “allegiance to a foreign country.”

Duss joins Sanders’s campaign manager, Faiz Shakir, as two of the more prominent members of the Sanders team who have been implicated in the propagation of anti-Semitic conspiracy theories. In 2012, when Duss served as the Center for American Progress’ Middle East director and Shakir edited the organization’s blog, Think Progress, the institution’s writers were accused of drafting statements that groups like the Anti-Defamation League and the Simon Wiesenthal Center regard as indicative of anti-Jewish bias.

Another Sanders endorser and surrogate on the stump, Rep. Rashida Tlaib, is similarly implicated in blurring the lines between opposition to Israel and anti-Semitism. The congresswoman has made absurd and callous claims about the Holocaust, shared anti-Semitic artwork online, approvingly compared the often anti-Semitic (according to the ADL) Boycott, Divestment, and Sanctions movement to the Boston Tea Party, and blamed the massacre of Jews at a Jersey City kosher market on “white supremacy” (the alleged perpetrators killers in fact associated with the hate group Black Hebrew Israelites).

Sanders may be insulated from the charge that he shares these suspicious sentiments because he is Jewish, but this clear pattern raises some disturbing questions. It is incumbent on the press to ask them. To at least a degree, Sanders clearly evinces some of Corbyn’s instincts on policy, but his affiliations suggest a similar tolerance for the radical left’s occasionally anti-Semitic indulgences.

Sanders stands a good chance of winning his party’s presidential nomination, and any major-party nominee can win the White House. If the Democratic Party is on the verge of succumbing to the same sordid temptations that consumed the Labour Party, the public deserves a full understanding of all that would entail. In that event, the abolition of private health insurance might be the least of our worries. 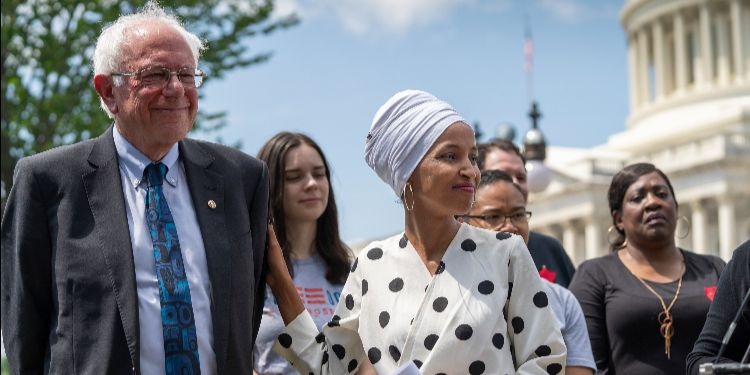