Much has been written about the abuses encouraged by the well-meaning politicians and reformers who backed the Obama-era expansion of Title IX protections on college campuses. Those protections created extrajudicial venues in which victims’ rights were ignored, the accused had their freedoms abridged, and colleges and universities were exposed to legal liability when the crimes they pretended to adjudicate found their way into real courtrooms. So much has been written on the subject, in fact, that it is fair to say that those who stand by these disastrous reforms don’t care to know about the damage they’ve wrought or the lives they’ve ruined. That’s the logical conclusion left to those who surveyed the grievously foolish reactions to Education Secretary Betsy DeVos’s efforts to clean up this mess.

The proposed change to the Title IX rules causing the most consternation today involves the process of arbitrating sexual-assault claims on college campuses. DeVos’s Education Department aims to protect the constitutional rights of both the accused and the accuser by ensuring that colleges do not violate the Sixth Amendment’s Confrontation Clause. The new changes would guarantee the right of the accused to cross-examine their accusers—a right that was “strongly” discouraged in the Obama administration’s April 2011 “Dear Colleague” letter and which has rendered the “verdicts” reached in these extrajudicial chambers suspect. As the Washington Post noted, however, this process “would have to be conducted by advisors or attorneys for the people involved, rather than by the person accused of misconduct.” If it is agreed to, testimony can even be delivered in separate rooms to ensure that a victim does not have to endure the trauma of being confronted by or even in the same room as his or her alleged abuser.

It should be plainly obvious by now how unreasonable critics of this proposal are, if only because they don’t seem to know the first thing about it. Nor do they appear to care much for the facts that they are so flagrantly misrepresenting.

“No survivor should be cross-examined by his or her accused rapist,” Representative Joe Kennedy insisted. “Ever,” he added. And he closed with a “Full stop,” for good measure. Kennedy was reacting to the mischaracterization of this proposed rule change promulgated by the pro-choice organization NARAL, which abandoned its narrow remit to claim that “Betsy DeVos would require universities to allow accused sexual abusers to cross-examine and re-traumatize their victims.” Jess Davidson, executive director of the group End Rape on Campus, agreed: “This will make schools less safe and make it harder for survivors to report,” he said.

Even the ACLU’s gratuitously “woke” social-media arm got in on the act.  “Today,” the supposed civil-rights organization tweeted, “Secretary DeVos proposed a rule that would tip the scales against those who raise their voices.” The ACLU also claimed that an alleged victim should not be subjected to examination by an adversarial party—a foundational concept in the Anglo-American understanding of objective jurisprudence—because it could dissuade potential accusers from coming forward. “It promotes an unfair process, inappropriately favoring the accused and letting schools ignore their responsibility under Title IX to respond promptly and fairly to complaints of sexual violence,” the group stated. “Favoring the accused” used to be the ACLU’s mission statement.

This Orwellian perversion of justice is even more unconscionable when considering how many precedents the ACLU had to ignore to form its conclusion. In September, the Sixth Circuit Court of Appeals found that a University of Michigan student who was expelled following a sexual misconduct hearing was deprived of the right to confront his accuser. “If a public university has to choose between competing narratives to resolve a case,” wrote Judge Amul Thapar, “the university must give the accused student or his agent an opportunity to cross-examine the accuser and adverse witnesses in the presence of a neutral fact-finder.” Both the accuser—whose experience is now tainted by association with this farce—and the accused were done a grave disservice. This college had not achieved justice; it had only created more victims.

Good faith observers can only withhold judgment for so long before their unwillingness to acknowledge the obvious becomes indistinguishable from bias. Those who would ignore the evidence before them to maintain their support for the travesties that were a result of the “Dear Colleague” letter are no friends to real victims of assault. By denying victims access to impartial justice, they are prolonging their torment. They are creating an environment where sensationalist tales of assault crafted by fabulist journalists drown out very real abuses. They are creating incentives for false accusations, unfairly creating an air of doubt around genuine claims of abuse. And they are actively ignoring legal precedent in favor of their own subjective standards of collective retribution.

They should be ashamed. If they’re not, it is up to honest proponents of true justice to shame them. 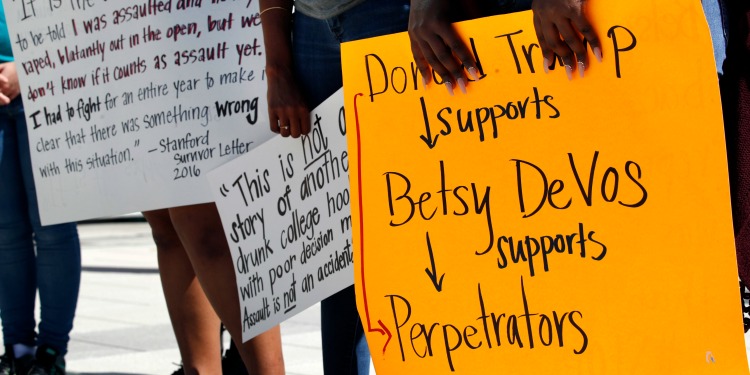