There was a time in living memory when presidential budget proposals mattered. Today, budgets originating from the White House are little more than positioning statements. Nevertheless, American presidents continue to produce statements of principle under the guise of budgeting, and Joe Biden is no different. As a political document, however, Biden’s new “budget” is notable insofar as its aim seems to be to trick the press into believing it will insulate Democrats against the notion that the party has drifted too far to the left.

The New York Times appears to have taken the bait. “With a center-leaning budget,” their headline read, “Biden bows to political reality.” The “reality” the paper of record is referencing is the verifiable unpopularity of the progressive agenda the Biden White House spent its first year in office pursuing unsuccessfully. And insofar as it is “center-leaning,” the administration’s budget nods to that reality because it includes increased funding for the national defense and local law enforcement, and it supposedly favors deficit reduction.

Progressives who had hoped to “defund” not just the police but the Pentagon (yes, really) are surely disappointed by the document. The president is seeking a 10 percent increase in defense spending, which is reflective of a national realization that great power competition will replace counterinsurgency operations as the chief priority for American war planners. Likewise, the administration’s allocation of increased funds to immigration and federal law-enforcement agencies recognizes both a growing migration crisis and rising violent-crime rates. And despite its $5.8 trillion price tag, the document’s commitment to reducing the federal budget deficit by $1 trillion over a decade demonstrates a renewed dedication to fiscal responsibility. The White House is calling it a “bipartisan unity agenda,” and who but the most maniacal partisans could oppose “bipartisan unity?”

The Times observes that the Biden White House is trying to “counter the messages from the far left” and give “endangered Democrats in swing districts” something they can promote on the campaign trail. But while Republicans may welcome this gesture in the direction of rationality, they’re unlikely to let Democrats get away with a contrived makeover.

The Biden administration’s budget estimates that deficit reduction will be accomplished in two ways. The first—one they never let Republicans get away with—relies on rosy predictions about economic growth and subsequent additional tax revenues for the treasury. As the Covid pandemic and Russia’s war of conquest in Europe attest, the unanticipated does sometimes happen, and straight-line predictions into the distant future are inherently fallacious. The second assumption baked into this premise is that Congress will pass new tax increases that have either already been rejected or are hilariously unfeasible.

For example, the administration is retailing the notion that Congress should pass a tax on hypothetical income. The proposal, which has been applauded by the progressives who are supposedly so put off by Biden’s austerity, involves taxing “unrealized gains” on assets that exist only on paper. This idea was floated when Biden’s Build Back Better initiative was convulsing in its final death throes as a way to attract the support of skeptical Democrats. It failed then, not just because of its dubious constitutionality and the depressive effect a tax on potential returns would have on capital investments, but because the number of taxpayers the initiative would target is infinitesimally small and it would raise a paltry sum. The Biden White House also wants to raise the corporate tax rate from 21 to 28 percent, which Democrats like Sen. Kyrsten Sinema already rejected.

Moreover, if the Biden administration’s only goal was to shore up the middle of his party and neutralize Republican efforts to portray Democrats as too far left, its decision to leave most of the party’s far-left agenda intact undermines that objective.

Biden’s budget includes perfunctory support for Build Back Better, though without the $2 trillion price tag attached. It funds “environmental justice” programs. It provides a 43 percent increase in funding to the Education Department, which critics believe will be used to preserve Covid-related moratoriums on serving student-loan debt. It allocates hundreds of millions of dollars to monitoring devices and other alternatives to incarceration for convicted criminals. And it includes provisions that racialize the disbursement of federal funds to “disadvantaged communities” similar to provisions that earned a federal court injunction due to their flagrant disregard for the protections against discrimination enshrined in the 14th Amendment.

Yes, presidential budgets are irrelevant as, well, budgets. They are, however, political spectacles. This performance only affirms Republican arguments against the Biden administration’s first year in office. 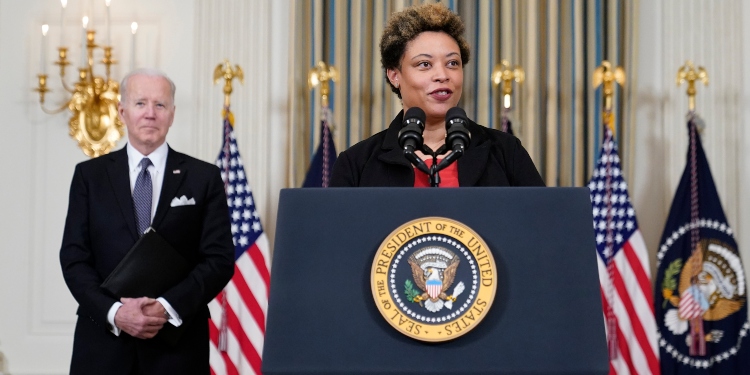