If you were still hanging onto some strained fiber of hope that the Biden White House would cobble together a coherent economic message ahead of next Tuesday’s elections, the president’s handlers cut you loose last night.

“Seniors are getting the biggest increase in their Social Security checks in 10 years through President Biden’s leadership,” the White House crowed. Indeed, Social Security recipients will see a staggering 8.7 percent increase in their cost-of-living adjustment next year, but that is nothing to celebrate. That gigantic cost-of-living boost, which follows 2022’s similarly large 5.9 percent hike, is a function of inflation. Social Security’s general benefit increases have been legally tethered to the Consumer Price Index for nearly a half-century. What’s more, the increase in disbursements will be paired with a middle-class tax hike. Wages subject to Social Security payroll taxes will grow by nearly 9 percent next year, with the maximum income subject to withholding growing from $147,000 to $160,200.

Only the presumption of profound ignorance on the part of Social Security recipients, to say nothing of everyone else, could explain why the White House thought this was a winning message. It was so deliberately misleading that even Twitter’s misinformation sleuths felt compelled to contextualize the tweet by reminding oldsters their good fortune is a byproduct of widespread hardship. Within hours, the White House quietly deleted the tweet.

Much like the off-key party the White House threw for itself to celebrate what a great job it had done taming inflation, the administration likely hopes this fiasco will recede into memory. And it might, if only because the administration is pivoting back to its comfort zone. With just six days to go before the midterm vote, Joe Biden will deliver yet another address to the nation about the menace Republicans represent to the health of American democracy.

The president’s staff have chosen Union Station in Washington D.C. for the backdrop against which Biden will warn the nation about what White House adviser Anita Dunn called the “threat of political violence.” The idea being that this threat is “geared towards subverting democratic processes” and is akin to what the nation witnessed on January 6, 2021. That threat has only grown more acute, Politico reported, as fears of Republican-inspired political violence were “borne out by Friday’s brutal assault” on Nancy Pelosi’s husband.

It’s Biden’s second bite at this apple and a curious one at that. His first attempt to mobilize voters in the defense of democracy was a political disaster, in part because it was so nakedly political.

Biden’s September 1 speech was billed as an effort to cool down national tensions, but the text of the speech only aggravated them. It was allegedly a non-partisan speech, dressed in all the trappings of the office of the presidency. But what Biden turned in was a modified stump speech. It was supposed to be a clarion call to Americans to move on from Donald Trump and his misguided grievances against the 2020 election, but the president’s clear intention was to summon the specter of Trump back into the national consciousness. It was an atonal visual disaster and a naked attempt to capitalize on voters’ fear that America’s democratic institutions are in jeopardy.

Those fears are real. Poll after poll has found that, behind economic issues, voters of all political stripes expressed more anxiety about the “state of democracy” than almost any other issue. But those same polls show that Democrats only enjoy a modest advantage on the issue compared with the GOP. That isn’t explained entirely by partisanship, with Democrats using “democracy” as a proxy for the Capitol riot and Trump voters conjuring up images of “mules” bearing boxes of fraudulent ballots. Independents, too, are roughly split down the middle on the issue of which party is best suited to preserve America’s democratic institutions. That’s a discerning perspective because neither party seems inclined to defer to those institutions when they produce political or electoral outcomes they dislike.

Given all this ambiguity, it’s a wonder that Biden has decided to go back to the same well. Indeed, White House advisers are telegraphing that this speech seeks to make political hay out of the assault on Paul Pelosi by a drug-addled paranoiac who apparently believed himself to be Jesus, which risks further cheapening the threat to democracy. But the White House is in a state of panic and is throwing whatever it can against the wall. 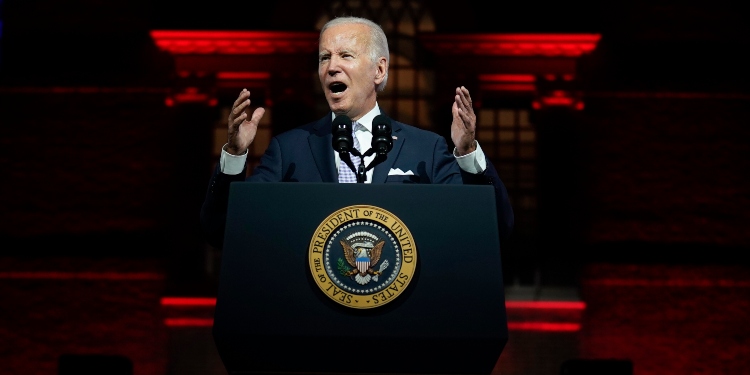