Perhaps because they seem to have made themselves the loudest in this campaign season, the army of spurned white, blue-collar Americans of all political stripes who find themselves drawn to Donald Trump is getting all the attention. Amid the winter of American discontent, a number of other key demographics are getting short shrift. If Republicans are beset by a resurgent less-educated, working-class, center-left vote that has up to now been largely ignored by the party elites, the Democrats are facing a more modest but nevertheless palpable revolt from an important element of their base: African-Americans.

There is widely-shared perception that Hillary Clinton’s almost unqualified embrace of President Barack Obama will make short work of self-described socialist Senator Bernie Sanders’ unexpectedly vigorous candidacy when the nominating contests shift to the South. There, the party’s African-American establishment, which is foursquare behind Clinton, will unite the partisan black vote and deliver Clinton a string of victories, thus rendering Sanders’ insurgency hollow. There is much to be said for this theory, and it is borne out in the polls. But African-American Democrats are struggling with the same Clinton fatigue that has afflicted the rest of her party.

When asked who he was planning to support in his state’s primary earlier this month, perhaps the most influential Democrat in South Carolina, Representative Jim Clyburn, revealed to reporters that his “heart and head are in different places right now.” The presumption that most would make from this revealing vote of little confidence is that Clyburn’s heart told him to go with the angry id of the liberal left, but his head knew that this was a pathway to electoral devastation. When he finally and reluctantly endorsed Clinton, Clyburn revealed that his heart “has always been with Hillary Clinton, but my head had me in a neutral corner.” Right. Sure thing.

That counterintuitive revelation likely squares with the thinking inside the Congressional Black Caucus, which has also backed Clinton albeit less reservedly than did Clyburn. “We must have a president that understands the racial divide,” said CBC Chairman and Representative G.K. Butterfield, “not someone who just acquired the knowledge recently, but someone who understands the racial and lived in it and worked through it down through the years.”

The polls suggest that Clinton is connecting with black voters in a way that Sanders is not. That’s not an especially high bar to vault oneself over when the Vermont senator runs ads like his media-praised “America” spot, which was packed with monochromatic Sanders fans who more closely resemble the demographic makeup of a Phish concert than the Democratic voting coalition. Beneath the surface of the polls, buried under the headlines touting Clinton’s unqualified support from older black voters who fondly remember her husband’s presidency, there is a vein of discontent within the African-American community. That discontent was nurtured over the course of Barack Obama’s presidency, which has been marred by deepening racial tensions and persistently high black un-and-under-employment. Clinton, not Sanders, is the focus of the ire of this group of voters.

Hillary Clinton is no political novice. She has watched her party drift leftward over the last 15 years since her husband left office, and she knew that his presidency would be both her greatest asset and a decaying albatross draped over her shoulders. Those old enough to remember the 1990s fondly might succumb to nostalgia, but the Democratic Party’s liberal wing remembers it as a period of missed opportunities, directionless centrism, and the dilution of the left’s animating philosophies. Clinton has simultaneously campaigned as a candidate promising a restoration of the Clinton dynasty, but she has also deftly managed to disavow virtually all of her husband’s most popular achievements.

Clinton began her bid for the White House by advocating an end to the era of “mass incarceration,” over which her husband presided and for which she lobbied as first lady. She bristles when questioned about Bill Clinton’s signing of the Defense of Marriage Act and his support for 90s-era restrictions on HIV-infected travelers seeking entry into the United States. Clinton claims to be a defender of marriage equality, but she was a staunch opponent of same-sex marriage rights until Barack Obama’s second term in office. When asked if she supported her husband’s signing of a 1996 welfare reform package, which some African-American activists regard as unduly harsh toward black welfare recipients, Clinton’s campaign declined to comment. Free trade; Attacking Saddam Hussein’s Iraq on several occasions, and without congressional approval; “The era of big government is over.” You’d be hard-pressed to find an achievement Bill Clinton secured as president that Hillary Clinton has not forsaken.

Somehow, political media outlets have declined to press Clinton repeatedly regarding her complicated views of her husband’s presidency. Imagine that.

Today, an activist class of black Democrats is about as little loved as are Republican-leaning economically liberal, culturally conservative Trump voters. They are making their discontent known, and Sanders has been a beneficiary. “People are dying. This is real. This is not TV. We need a president that’s going to talk about it.” These were the impassioned words of Erica Garner, the daughter of an African-American man who was killed after he was physically restrained by an NYPD officer for the crime of selling loose cigarettes on the street. “There’s no other person that is speaking about this,” she said in a cutting advertisement for Bernie Sanders.

The vanguard of the Black Lives Matter movement that was once so hostile toward Sanders seems to have trained its fire on Clinton. In a video that recently exploded online, the former secretary faced down an African-American protester who confronted the former secretary of state with her own words. “We have to bring them to heel,” Clinton said in 1996 in support of a crime prevention bill targeting gang members, who she referred to as “super-predators.” The overwrought protest decided to conflate gang members with all black Americans and demanded Clinton repent. “You owe black people an apology,” she insisted as a secret service agent ushered her away from the anointed heir to Obama.

Like much of the Trump movement complaints about the GOP, some of the black community’s frustrations with the nation’s elite Democratic establishment are more coherent than others. Some of it is inchoate, directionless angst, but that alone does not invalidate it. The disaffected and desperate are not often known for their far-sighted strategic thinking. There is an opportunity here for Republicans with the capacity for broader crossover demographic appeal. As Cook Political Report’s Amy Walter observed, even a modest shift in the black vote toward Republicans – a prospect with great potential, as Republican candidates have demonstrated the ability to pull double-digit African-American support when Barack Obama is not at the top of the ticket – can help the party win the White House. But the GOP’s candidates with a dedicated effort to appeal to black voters – Rand Paul and Rick Perry, in particular – were all swamped by a candidate with an overtly xenophobic message. Senator Marco Rubio appears to be next to meet the gallows.

The Democratic Party’s lock on the African-American vote seems unlikely to be challenged this year, and the simmering resentment within that community will linger on, perhaps for another generation. 2016 has demonstrated conclusively, however, that resentments don’t stay buried forever. They explode, and they don’t choose opportune moments to do so. While the Democratic Party is enjoying the GOP’s bitter civil war and possible disintegration, they should take care to note that their coalition is not quite as sound as it might seem on the surface. 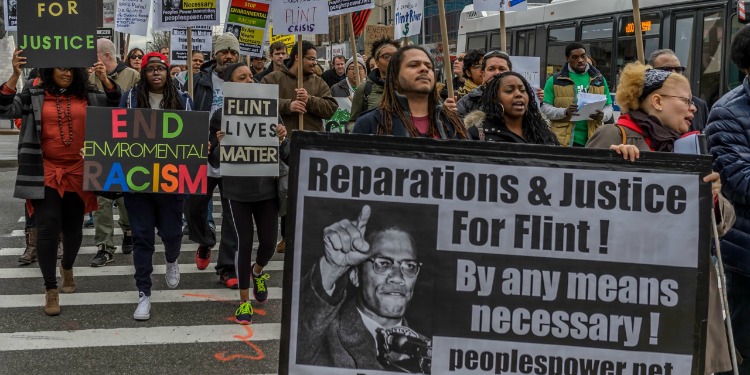