We are drowning in triumphalism. Poll after poll has shown that the vast majority of voters, even a conspicuous number of self-described Republicans, are amenable to the radical tax increases proposed by the Democratic Party’s leftmost celebrities. A new day is dawning, the headlines blare. Austerity has become a four-letter word, and the new progressive age is upon us.

It is not particularly surprising that the public favors the prospect of augmenting America’s social-welfare programs with almost no tradeoffs. After all, the tax increases meant to fund these programs target only the exorbitantly wealthy, and they can presumably afford it. But a cursory glance under the hood of these proposals exposes the political media’s incurious jubilance for the abdication of responsibility that it is.

When Rep. Alexandria Ocasio-Cortez is quizzed by interviewers about how she planned to pay for the expansive public programs she advocates, her knee-jerk response had been to question the validity of the premise. But when indignation alone repeatedly failed to satisfy her skeptics, she finally came up with a funding mechanism: marginal “tax rates as high as 60 or 70 percent” on your “10 millionth dollar” or more.

Now, the wildly divergent economic impacts and potential revenues in that 10 percent gap suggest that this was not an especially well-thought-out proposal, but some intrepid analysts went ahead and scored it anyway. It turns out that, in 2016, only about 16,000 Americans showed more than $10 million in taxable income. And since marginal rates below that “10 millionth dollar” wouldn’t change, the new federal tax revenue generated by this hike amounts to only about $72 billion annually or $720 billion over a decade. Considering that the United States currently shells out about $2.5 trillion on mandatory spending alone (Social Security, Medicare, Medicaid, unemployment and pension benefits, and a host of other social-welfare programs), it’s safe to say that AOC’s proposal falls short of being a comprehensive funding mechanism for her policy preferences.

A passing glance at Rep. Ocasio-Cortez’s tax-related thought quickly leads observers to conclude that the pool of money it draws from isn’t enough to allay critics’ concerns. Democrats need a bigger pool. The obvious next step would be to import a European idea, a tax on wealth. Wealth taxes in places like Norway, France, and Iceland have proven windfalls for their respective treasuries, and American progressives have long been envious of Europe’s confiscatory social compact. It was inevitable that one of the Democratic Party’s 2020 candidates would endorse the idea, and Sen. Elizabeth Warren was the first.

Warren’s plan for a 2 percent tax on the assets of households worth over $50 million and a 3 percent tax on over $1 billion in wealth is estimated by two University of California-Berkeley economists to be able to produce $2.75 trillion over ten years. Again, a little more than what America spends on non-discretionary spending in one year. More ambitiously, Warren would impose an “exit tax” on Americans who try to avoid this tax by renouncing their U.S. citizenship, essentially expropriating 40 percent of all their property and assets.

This constitutionally dubious plan may not survive scrutiny in the courts, and concedes that wealthy Americans will pursue every available avenue to hide the assets they are now obligated to itemize for the IRS. What’s more, the dramatic reduction in wealth will have downstream effects on tax revenue, as less money is invested in the economy, resulting in less consumption, fewer new opportunities for employment, and reduced revenue from taxes on income, payroll, and capital gains. These effects are observable in every society that has experimented with seizing the property of high earners.

To these irritating but immutable economic realities, progressives tend to respond with more indignation. “Because they can hire good accountants to avoid tax policy, we should not change the tax laws?” asked progressive analyst Zerlina Maxwell. If the objective is to generate more revenues and not to reduce the pool from which those revenues are drawn merely to cut the rich down to size, then the idea should be to create an effective tax code that discourages tax avoidance.

The shallowest analysis of progressive tax plans and wild-eyed social-welfare proposals focuses on their popularity. Indeed, getting something for nothing is always going to be very popular. It’s more than a little revealing that the national press has, for the most part, avoided the only question that matters: Will these proposals work? As Sen. Kamala Harris’s woeful experience shows, the devil is in the details. And the devil always gets his due. 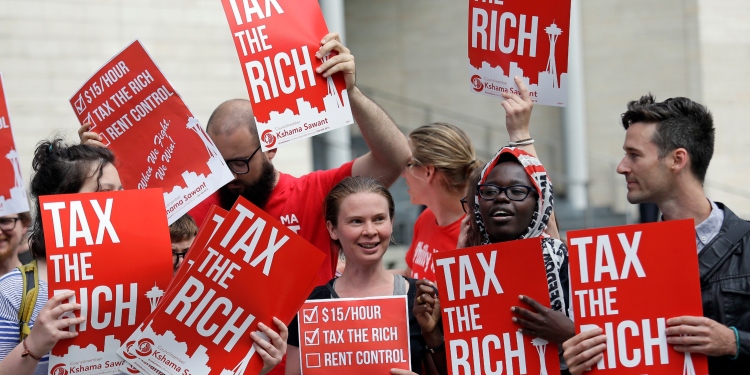