Since the end of the Second World War, American policy makers have occupied themselves with a problem of perennial urgency: can Europe be “fixed?” As those quotes imply, this chauvinistic view toward European self-determination is, perhaps, a bit jingoistic. It is nevertheless an accurate assessment of how Washington’s political professionals view the European problem. As the continent’s vacation from the forces of history comes to a close, this old problem is again exigent.

Two global wars resulting in the decimation of generations in less than a half-century lit a fire under the project of European integration. Unionism, it seemed, was the solution to the old and enticing forces of fractious, militaristic nationalism. The American union of states had for the most part compelled peoples of divergent nationalities and disparate political interests to accept, if not to embrace, comity. A Union of Soviet Socialist Republics seemed capable of forcing Tartars, Uzbeks, Tajiks, Russians, and the various peevish nationalities that populate the Caucasian foothills into cohabitation, albeit only through the coercive authority of totalitarianism. Perhaps the answer to Europe’s suicidal impulses was codependency.

Thus, the European Coal and Steel Community was born. The 1952 treaty binding France, West Germany, Italy and the Benelux nations was designed to create a system of economic and industrial interdependency in Western Europe that would render future wars a reckless gambit. The heady notion that a European Federation would soon evolve out of this community of fractious nationalistic powers soon dissolved, but the hope that unionism was the only force that might keep the peace in Europe persisted.

Even as the illusory unionism of the Soviet system dissolved, European integration accelerated. Just days before the Soviet Union formally dissolved, Western Europe concluded the Maastricht Treaty. The European Union as we know it today was forged in 1992, and its expansion has been neither arrested nor reversed in two decades. It might only have been a prelude. A period of integration and the peace concomitant with it may soon be coming to an end.

Today, the European Union is squeezed from all ends. Its existence is threatened and what might succeed it remains a subject of conjecture. If the United States were to succumb to the temptation to presume that its influence overseas is wholly unwanted and ultimately counterproductive, the post-integration era may become a disastrous one.

The famously Euro-skeptical British Member of the European Parliament Daniel Hannan observed recently that the EU is fundamentally a holdover from another era. Its structures were erected in a world in which international trade was limited and expensive, and when nationalistic ethnoreligious blocs dominated the European landscape. “In 2013, the size of the commonwealth economy became larger than that of the Eurozone economy,” Hannan observed. “These are economies where we have a natural advantage, linked as we are by language and law, by habit and history.” Hannan’s observation that integration with the “Anglosphere” represents a greater economic opportunity for Britain than does the European Union seems a popular one.

The Times of London’s latest survey, conducted by YouGov, found this week that 45 percent of British citizens would vote to exit the EU compared to just 36 percent who would oppose “Brexit” ahead of a forthcoming referendum on the matter. Public opinion surveys, most of which predicted in 2014 that former Labour Leader Ed Miliband should be Prime Minister by now, are suspect. But the near universal skepticism with which David Cameron’s efforts to sketch out a deal that would allow Britain to remain in the EU with certain privileges of sovereignty suggests the United Kingdom is ready to bolt.

If political anxiety at the European Union’s Northwestern edge is threatening integration, regular sovereign debt crises on its southern frontiers have made the prospect of continued unionization one characterized by diminishing returns. Chronically indebted nations like Spain, Italy, and, most notably, Greece regularly flirts with the prospect of default and, necessarily, devolution and secession from the EU. The most recent of these crises occurred over last summer, and it was resolved when the far-left governing party in Greece was compelled by Germany to buck the will of its voters and impose on them severe austerity measures in return for a series of emergency loans.

Germany’s will to hold the European project together is being tested like never before by a refugee crisis of a magnitude unseen since World War II. Millions of Muslims fleeing poverty, authoritarianism, war, and unimaginable cruelty have descended upon the continent. Among these millions of refugees are Islamist militants, Germany’s domestic intelligence services revealed. They are intent on taking advantage of Europe’s egalitarianism in order to execute terrorist attacks of the variety that drenched Paris in blood last November and which subsequently paralyzed the continent for weeks. Even if the terrorist threat fails to materialize, a cultural shock in the form of cloistered Islamic men thrust into a culture of sexual liberation and secularism has resulted in alienation and violence. Mass migration has also had the effect of sapping Europe of much of its welcoming spirit. A crisis of confidence in Europe’s leadership is brewing, and anti-integrationist nationalist parties are on the rise.

Meanwhile, on the easternmost edge of modern, integrated Europe, war has again returned to the continent. In Ukraine, artillery rains down upon entrenched soldiers fighting a Russian-fueled separatist conflict in the East. The old specter of Anschluss again haunts Europeans, as Moscow has become the first great power in 70 years to unilaterally invade and annex neighboring territory. That often overlooked war is not simply one over a modest portion of land on the forgettable European steppe. It is a war of conquest and of hegemony over the continent; a war Russia has fought for centuries and which the West chooses to ignore at its peril.

Meanwhile, in the United States, an equally primal political instinct is again dominant. It asks Americans to look toward its own, to disregard the tribal squabbles that have defined the old world for millennia, to buttress fortress America and to nation build at home. Neither global economic integration nor the advent of intercontinental ballistic missiles could rid Americans of this, their most basic of political impulses. Should the argument in America that favors withdrawal from the world carry the day at the same time that European integration becomes discredited, the consequences for the continent – and international security – might be dire.

Even as political integration becomes untenable, there is one organization that is as necessary as ever: the Atlantic Alliance. In the face of renewed Russian aggression, the NATO alliance has been granted a new lease on life. It is by charter an American-led military institution with a European-managed political face. The alliance ensures that the United States is today and will remain a European power. Washington has all the legitimacy and authority to fill any vacuum that might arise should Europe come apart. In America’s absence, ethnocentrism, Balkanization, or perhaps even Moscow will become the dominant force in Europe.

America need not fear disintegration if that is the course that Europe chooses. If, as MEP Hannan advocated, risk aversion and Milton Friedman’s “tyranny of the status quo” fails to compel Europeans to resist great change, it is in American interests to lean into the special relationship it has with Britain and to enforce its status as a geopolitical pole. America remains the indispensable nation against which the world simply cannot afford – both metaphorically and quite literally – to turn. Amid so much speculation, one certainty remains: Washington cannot afford to take a laissez-faire approach to the march of history on the continent. 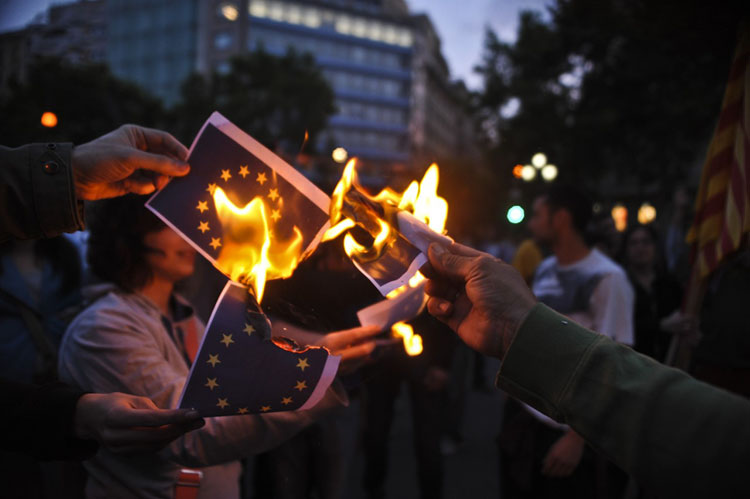