Conservatives gave up on Chris Christie a long time ago, but I never did.

The species of Republican native to New Jersey is one that is particularly prone to compromise. It is a necessary evolutionary adaptation that has allowed it to survive in such a hostile habitat. Growing up in the Garden State, the Republicans that I was accustomed to seeing make their way to the governor’s mansion in Trenton were the likes of Christine Todd Whitman; bright, technocratic managers, but by no means conservative reformers. Chris Christie was something else.

I first heard Christie’s name in the summer of 2009 when he led the virtual decapitation of governance in Hudson County in a dramatic mass arrest of corrupt officials. They brought in buses to haul off all the indicted, which included the mayors of Secaucus, Ridgefield, and Hoboken — the latter of whom had served less than a month before eagerly soliciting and accepting a bribe on camera. This kind of public corruption permeates New Jersey. It typifies it. There is a nasty element of the public who sees it as normal and looks favorably upon those who are skilled at it as deft negotiators of a dangerous game. As a prosecutor, Christie demonstrated that there were still men of integrity.

When he was elected governor in 2009, it was a remarkable breath of life into the moribund conservative movement. His election, along with Virginia Governor Bob McDonnell, was the first sign that the public had not succumbed entirely to the promises of statism in the burgeoning Obama era. When the nation seemed eager to throw money at its problems without any care for the efficacy of those expenditures, where the funds would come from, or how to service the associated debt, here were the people of New Jersey – New Jersey, of all places – yelling stop.

When Christie came into office, he did so with no more critical goal than to defang the cartel of teachers’ unions that had a stranglehold on his state. Christie’s stern and combative town halls with recalcitrant teachers unions officials, who had grown accustomed to their privileges provided at public expense, transformed him into a national celebrity. The governor successfully pared back the influence of that 200,000-strong public sector employee union and reformed the education system in the state. From there, he compelled the obdurate Assembly Democrats to eliminate public support for Planned Parenthood. He managed to secure balanced budgets for every year he was in office and reformed the state’s unsustainable pensions funds in the process.

In the age of the tea party, Christie was a heterodox sort of conservative. But these were accomplishments that only the damnedest of conservative reformers would have allowed themselves to daydream about just a few years earlier. For New Jersey Republicans who had spent a decade languishing under Jim McGreevey, Richard Cody, and Jon Corzine, the Christie administration was not merely a gust of fresh air but deliverance.

If Christie’s willingness to buck the nation’s self-appointed arbiters of conservatism occasionally earned him a scolding from right-leaning columnists and radio talk show hosts, it was worth it because there was a bigger object in mind: the expansion of the GOP into a dominant national governing party. He spearheaded criminal justice reforms that accentuated rehabilitation for non-violent drug offenders over incarceration, leading the way on that issue before it was a cause célèbre, and appealing to voters who don’t traditionally back the GOP. When the right’s more xenophobic elements attacked Christie for appointing an American-born Muslim man to a New Jersey court, Christie called that kind of bigotry out for exactly what it was.

This Chris Christie was such a popular conservative reformer that he was invited to speak at the Reagan Library where he never once used the word “conservative” to describe himself but was nevertheless begged by the audience to run for the presidency. Such was the movement’s hunger, even then, for a man of authority and conviction to serve as the Republican standard-bearer.

Throughout the period in which Republicans soured on Christie – the hug, the bridge, the self-reverential speech at Mitt Romney’s convention, the myriad credit ratings downgrades for the state he led – the hope that he was a party man doing what the party needed endured. The 31 Republican governors he helped elect in 2014 in states like Illinois, Massachusetts, and Maryland attest to that. Maybe Chris Christie wasn’t a conservative, but he was helping to build up the only vehicle in America through which conservatives seek and obtain power: the Republican Party. On Friday afternoon, Chris Christie set his legacy on fire.

Standing beside Donald Trump and endorsing the most unfit man to seek the presidency in my lifetime for the highest office in the land, Christie’s base careerism and disregard for the nation were exposed. Gone was the prosecutor who had ruthlessly fought corruption in New Jersey. In his place was a man defending Trump’s handling of the scam operation Trump University, which pitilessly bilked thousands out of their savings. Gone was the man who had scolded conservatives for indulging to bigotry by presuming an American Muslim jurist had to be an advocate for Sharia Law. Instead, there stood a figure linking arms with a demagogue who had proposed banning any Muslim entry into the United States – a proposal Christie had called “ridiculous” – and who dubiously cites the Chinese Exclusion Act of 1882 as constitutional precedent. Gone was the “straight talker” who “tells it like it is.” In his place is a man endorsing a serial compulsive liar who seems constitutionally incapable of honesty about himself, his record, or his beliefs, and who tells outrageous and slanderous lies about the heroes of his country and of his party. Gone was the conservative reformer who promised the necessary overhaul of the country’s entitlement programs. Instead, the diminutive figure debasing himself in the shadow of a reality television star now defends the unsustainable status quo in perpetuity and with no regard for fiscal realities.

For another few fleeting moments in the intoxicating light of the cable news cameras, Chris Christie has sacrificed every principle for which he once stood. Christie will spend the remainder of the campaign season aggressively compromising his integrity and shouting down anyone who refuses to abide the intolerable stench of hypocrisy that now accompanies his presence. This is a man who pounded the table when the facts were with him. Imagine the spectacle we will be forced to witness now that they’re not.

Christie’s betrayal is not merely of the conservative movement, of which he appears so contemptuous, but of the Republican Party to which he has devoted his life. More, it is a betrayal of the Constitution he once upheld. Minutes after his joint appearance with Trump, the celebrity candidate took to a stage where he was cheered by his throngs of idolaters for promising to impose dubious restrictions on speech and print so that he could punish those who say mean things about him. Everything for which Trump stands is a betrayal of conservative values, and now Christie has become the chief prosecutor in the case against conservatism.

Whatever envious, petty, bigoted, grievance-based movement Trump is leading, it is not a Republican movement. Whatever Paul LePage represents, it is not the egalitarianism of the Enlightenment for which his forbearers fought and died. Whatever struggle the likes of Sarah Palin and Ann Coulter are waging, it has very little to do with the country they supposedly love. And now Chris Christie has joined these motley ranks. Good riddance. 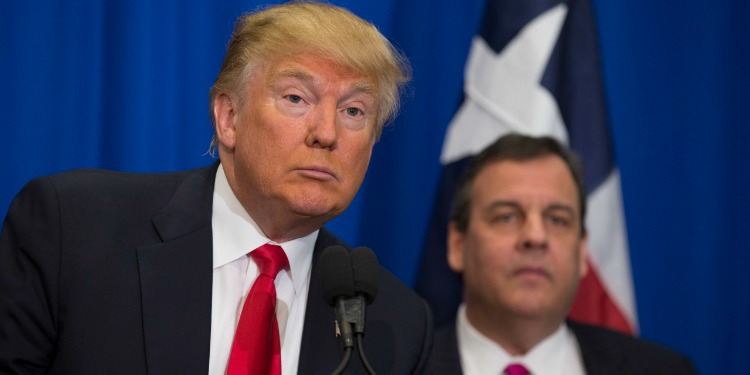