If Marco Rubio’s slow and steady campaign for the Republican Party’s nomination has been distinguished by just one trait, it is imperturbability. Rubio’s team was not vexed by his consistent polling in the single digits in the summer, they were unmoved by the ascension of Donald Trump, and they declined to go after Jeb Bush in the same way he attacked their candidate. January is the month that Rubio’s campaign had hoped to begin his rapid upward ascent in the polls, crowd out his moderate Republican competitors, and emerge the prohibitive frontrunner. But the Florida senator has encountered an obstacle along this path in the form of New Jersey Governor Chris Christie, who is making a play for Granite State hearts. Only one can emerge from New Hampshire the best hope for the GOP’s moderate wing, and the stakes in the coming clash between these two candidates couldn’t be higher for the Republican Party “establishment.”

Two weeks ago, I submitted that a late-breaking Christie surge in New Hampshire might not do much for his campaign in the long run. Christie has put all his eggs into the Granite State basket, has little field organization outside of that state, and has failed to file a full slate of delegates in a variety of key primary states. If Christie were to outperform Rubio as the “establishment” alternative to Donald Trump or Ted Cruz, it is unlikely the New Jersey governor could translate February 9th’s momentum into a national campaign that propels him into June. What is more certain, however, is that the blow Christie will have dealt to Rubio’s ability to present himself as both electable and palatable to conservative primary voters will be nearly fatal. A Christie win over Rubio in New Hampshire would ensure that South Carolina and Nevada remain competitive among the moderate GOP candidates. Moreover, the predominantly Southern primaries in early March that favor Trump and Cruz are only likely to continue to sap Rubio’s campaign of viability before the populous, purple states that are traditionally amenable to moderate candidates cast their votes.

In short, Christie may not be able to win his party’s nomination for the “establishment” Republican voter, but he sure could lose it.

This dynamic makes the latest maneuver from Rubio’s allies at the super PAC Conservative Solutions so interesting. Targeting Christie in New Hampshire, the PAC has launched a double-barreled assault on Christie’s record designed to appeal both to conservative primary voters and the moderate Republican-leaning independents who might also vote in the Granite State’s open primary. According to reporting from National Review’s Eliana Johnson, these two pro-Rubio PAC ads are “a major part of an ongoing multi-million dollar buy in New Hampshire over the next couple of weeks.”

Strategically, these ads are smart. The first is an unyielding attack on Christie’s credibility as a conservative and features him arm-in-arm with Barack Obama just weeks before the 2012 election while the president was touring Hurricane Sandy-ravaged New Jersey. The ad attacks the governor for backing common core, expanding Medicaid under ObamaCare, and references his support for clean energy subsides. “Chris Christie,” the narrator concludes over an image of Christie and President Obama in a near embrace, “One high-tax, Common Core, liberal energy loving, ObamaCare Medicaid expanding president is enough.”

The second spot aimed at persuadable centrist voters dials the tone back a bit but nevertheless leaves the viewer with a lasting impression. The advertisement notes that New Jersey’s tax burden is among the highest in the nation, that its rate of population growth is one of the Union’s lowest as more and more New Jersey residents emigrate, and that its rate of job growth is anemic. Garden State residents who lived through successive Democratic Governors Jim McGreevy, Richard Codey, and Jon Corzine might be more forgiving than Granite State residents of New Jersey’s liberal inclination. Finally, the ad closes by touching on what is likely to be Christie’s greatest liability: Bridgegate. While the governor remains untouched by the scandal, two of his aides were indicted for their roles in the closure of two lanes of the George Washington Bridge under dubious circumstances.

Christie welcomed the attacks. “Bring it on,” he exclaimed. The governor went on to turn Rubio’s words against him and observed that the Florida senator once admonished Jeb Bush from the debate stage for embracing a strategy of negative attacks. Christie’s parry was perhaps muted when he proceeded to echo Bush by questioning Rubio’s light 2015 voting record – a line of attack to which Christie, who has spent 70 percent of the last year outside of New Jersey, is equally vulnerable. Still, this back and forth is an indication of things to come.

It’s perhaps likely that Jeb Bush believes he can take advantage of the feud between Christie and Rubio and surge right up the exposed middle, but national surveys continue to indicate that the former Sunshine State governor is the fallback option for only a modest segment of the Republican primary electorate. With just weeks left before the first votes are counted, the race for primacy among the party’s moderate wing looks set to come down to either Rubio or Christie. And the stakes are incredibly high.

Contrary to popular opinion on the activist right, the GOP has generally tended to nominate moderate Republican officeholders for the presidency not due to some nefarious conspiracy but because those candidates appeal to Republicans who vote. College-educated Republicans with higher self-reported income levels tend to vote with more regularity than do their conservative counterparts without a college degree. The problem for the “establishment” wing this cycle is that the activist conservative voter without a college degree is generally united behind either Trump or Cruz (though the latter enjoys more crossover appeal than the former), while the Republican Party’s moderate vote is hopelessly fractured. That is particularly true in New Hampshire, where Bush, Christie, Rubio and John Kasich are all splitting this faction’s vote.

For now, only Rubio has the apparent organizational strength to translate a strong showing in the Granite State into national momentum that can get him through the lean weeks in early March, when insurgent candidates will likely perform well. As the Washington Examiner’s David Drucker reported, the Christie camp has quite a bit of catching up to do when it comes to building a national organization, and they’re apparently hoping that a surge of interest in their candidate after a strong showing in New Hampshire will augment that process. That’s a gamble.

Still, if anyone knows how to fight and win a political battle, it’s New Jersey’s brash Governor Christie. He’s a genuine threat to Rubio’s position as the “establishment” favorite, and the Rubio campaign knows it. Whoever New Hampshire’s moderate GOP voters settle on will likely emerge as the “establishment” wing’s best chance to maintain their traditional control of the Republican Party’s evolutionary trajectory. 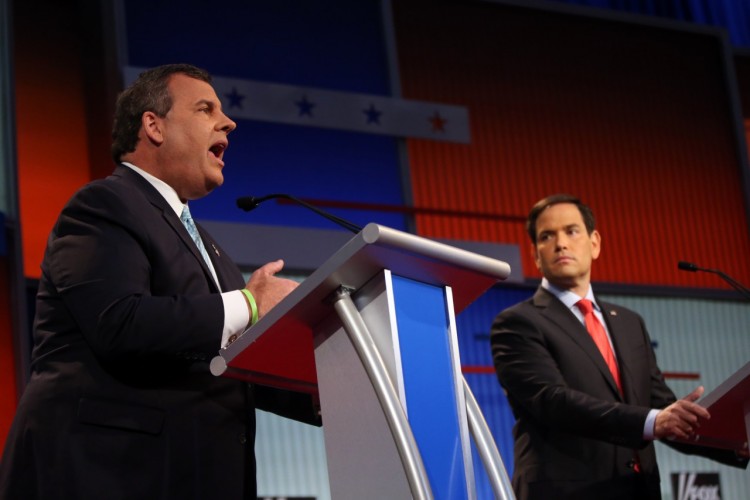