Americans have never been entirely comfortable with their freedoms, particularly those that license the wrong sorts of behavior from their political adversaries. The First Amendment to the Constitution is a particular source of consternation. It’s far harder, after all, to combat unproductive or anti-social forms of expression in the arena of ideas than it is to silence them through the courts or the legislature. But Americans who lament the excesses that accompany liberty can look to the rest of the Anglophonic world to see what life would be like without those freedoms.

The U.K. is a compelling case study in what a government-led campaign against “bad ideas” looks like. Amid British efforts to clamp down on the kind of ideological fervor that can manifest in criminality, the government itself has become extremist.

“The United Kingdom is concerned about homegrown radicalization and possible terrorist attacks committed by British nationals on British soil,” reads the British government’s summary of the campaign against “extremism.” The terroristic threat posed by everyone from Islamist radicals to neo-Nazis to Irish separatists has necessitated extraordinary measures. Because the government of this largely free society cannot capriciously imprison people it doesn’t like, it must combat radicalization in other ways. One of those ways has been to brand certain political activities “extreme” and to apply legal consequences to that status.

In 2017, four members of the British military were arrested on suspicion that they were affiliating with a far-right group that was banned after it endorsed the murder of Labour MP Jo Cox, who was assassinated in June 2016. The Ministry of Defense determined that it had a problem with militant nationalism in its ranks. So, to combat and stigmatize those ideas, it trained the soldiers under its command to recognize that kind of militancy and instructed them to inform on their radicalized comrades.

A U.K. Army document identified the “indicators & warnings” that suggest a soldier had become “Extreme Right Wing (XRW).” So, what are the signs that your compatriot in the trenches may be swayed by the ramblings of the racially anxious right? Among some more overt expressions of white nationalism, the solider may also be prone to making “inaccurate generalizations about the Left.” He might be “increasingly angry at perceived injustices or threats to so-called national identity” and could describe political opponents as “Traitors.” Worst of all, the XRW among you will be known by the fact that they “describe themselves as ‘Patriots.’”

Obviously, issuing an all-points bulletin to be on the lookout for “patriots” in the armed forces is going to leave aspiring informants spoiled for choice. Nor is it entirely clear why patriotic sentiments would be limited to the British right. The British Ministry of Defense seems aware of the controversy surrounding the document, which leaked to the press following a freedom of information request earlier this month. Displaying one or more of the traits of an XRW does not itself make one an XRW, a ministry spokesperson explained. A holistic approach to combating radicalization demands, however, that almost all right-wing views be deemed potentially suspect, if only out of an abundance of caution.

The right isn’t alone in being targeted. Last year, the journalist Michael Segalov was banned for no ostensible reasons from covering a Labour Party conference on the grounds that he could potentially disrupt it. He sued the local police force that issued the ban and discovered that he had been secretly labeled a “known extreme leftwing (XLW) activist.” His crime was guilt by association. Police justified the ban by noting that Segalov had once met with leftist anti-deportation activists, some of whom later released a swarm of cockroaches in a local restaurant. Segalov claims he was just reporting on the events around this group’s protest, and a judge agreed. But that didn’t prevent him from being secretly branded a threat to the state for years.

A government that is empowered to police free expression and association will always make liberal use of its authority. Republicans and Democrats who would prefer to see the federal government empowered to police the kinds of conduct they don’t like should be prepared to see themselves and their allies become the target of such a state. There is no permissive liberal society that does not wrestle over how to combat radical ideas that prescribe violence and persecution. But introducing severity to combat severity sacrifices the moral high ground and is ultimately unproductive. The undeserving who are swept up in these excessive measures now have cause to be radicalized themselves, after all.

Britain has embraced extremism to fight extremism. In the end, extremism wins. 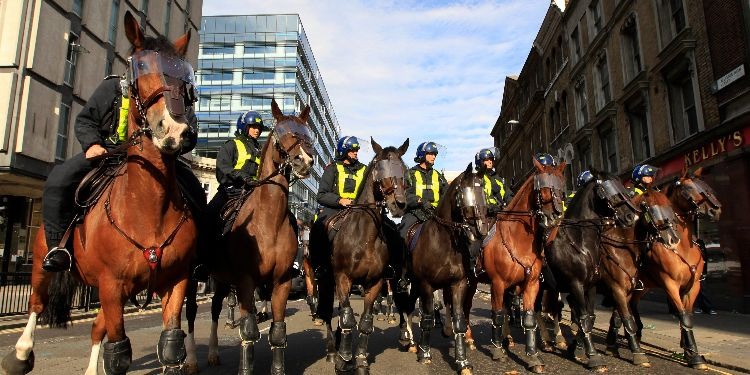