The National Defense Authorization Act (NDAA)—a must-pass piece of legislation that establishes the Pentagon’s annual budget and expenditures—is fast becoming a refuge of scoundrels. Around this time of year, the NDAA becomes the legislative equivalent of last-minute holiday shopping. All the past year’s broken promises and failed attempts at social engineering find their way into what is fast becoming a congressional gimmick. This year is no exception.

This year, the NDAA has been proposed as the proper venue to litigate stalled initiatives such as the SAFE Banking Act, which would reform federal laws to allow legal businesses that trade in marijuana to open bank accounts and get loans. There’s an effort underway to use the NDAA to make good on the assurances given to Sen. Joe Manchin that Congress would reform the fossil-fuel permitting process in exchange for his vote on a climate-change spending bill masquerading as an “inflation reduction” measure. Perhaps most distressing, this appropriations bill is being used this year to back an extraordinary intervention in the conduct of private enterprise predicated on a bipartisan persecution complex. They call it the “Journalism Competition and Preservation Act.”

The JCPA takes aim at the symbiotic relationship between news outlets and social media organs. The bill, which has languished in relative obscurity for years, would formalize the relationship between these two industries, forcing “Big Tech” companies like Google and Meta (formerly Facebook) to remunerate local news outlets for the privilege of distributing the content they produce. Modeled on Australian law (we’re already off the rails), the bill would compel social-media outlets to negotiate a fair rate with journalistic institutions for allowing users to post content or have a fair rate imposed on them in arbitration.

In theory, this would prop up smaller, local journalistic outfits as it excludes media companies with 1,500 or more full-time employees. In practice, the bill would accelerate the commercial trends presently rendering local journalism an unprofitable enterprise.

The bill’s inception occurred around the time that the American political class worked itself  into a froth over the monopolistic permanence of Facebook. Washington suffered a crisis of confidence in the power of markets to destroy as well as create, and this lack of faith was rewarded with humiliation. Facebook subsequently went to war with its own business model, and it is imploding before our eyes. Nevertheless, the JCPA is marketed as an anti-trust bill designed to restore competition to an anti-competitive landscape.

In fact, the JCPA includes anti-trust exemptions that allow conglomerates to evade the restrictions that prevent “Big Media” from taking a cut of “Big Tech’s” action. An eight-year temporary safe harbor allows major media companies to collectively bargain, which would give major media providers such as News Corp and Gannett opportunities that are unavailable to upstart journalistic outfits. The bill specifies that any recipient of Silicon Valley’s largess must have “25 percent of its editorial content consisting of information about topics of current local, national, or international public interest,” which captures just about every journalistic endeavor. The bill does, however, include restrictions on outlets affiliated with designated terrorist organizations, so Congress’s raid on Palo Alto does have at least one limiting principle.

In a statement, one of the JCPA’s co-sponsors, Sen. John Kennedy, touted the bill’s efforts to “bar the tech firms from throttling, filtering, suppressing, and curating content.” Where Congress derives its authority to dictate how private institutions work out their often propriety content-moderation practices is a mystery. The authority is certainly not derived from the U.S. Constitution, which arguably prohibits the federal legislature from regulating this form of speech.

Likewise, the bill would revolutionize American copyright law if it passed constitutional muster, which it probably doesn’t. “Linking isn’t copyright infringement, at least under current law,” read one illuminating exploration of the JCPA via the Electronic Frontier Foundation. “But the JCPA risks creating a new quasi-copyright law for linking, or even leading the courts to extend copyright law to cover some forms of linking.” Proponents of the bill dismiss this criticism by citing its savings clauses, which explicitly state that the law shall not supersede existing anti-trust law. But the legislation does just that, and courts tasked with assessing its constitutionality are all but certain to take issue with these likely severable clauses.

Still, defenders of this legislation will insist it is hardly unprecedented for Congress to try to support the invaluable services provided by local journalism. When the Supreme Court ruled in 1969 that two competing newspapers in the same city cannot collude with each other to avoid going out of business, Congress responded with a law that allowed local media to engage in revenue sharing as long as they maintained distinct editorial staffs. But the Newspaper Preservation Act failed to defend the diversity of local media outlets from the ravages of the marketplace. Indeed, the “joint operating agreements” the law allowed may have had the opposite of their intended effect, which is perhaps why they are almost extinct today. Congress has already tried to respond to the problem of inefficient media cartels by establishing the conditions for cartelization that they regard as more favorable. The record has not been stellar.

Given its dubious constitutionality, its foreign provenance, its incentives toward syndication, and its likely inability to perform its primary objective—protecting local journalism from the indifference of consumers—it’s not clear what justifies this legislation. Strip from it the bombastic populist rhetoric with which the bill’s supporters ornament it, and you have nothing more than an effort by Congress to force a profitable industry to subsidize a troubled one. Even if schemes like this had a record of success, which they don’t, it is a violation of Congress’s remit. Thank God, then, for the NDAA. Without it, voters might have noticed. 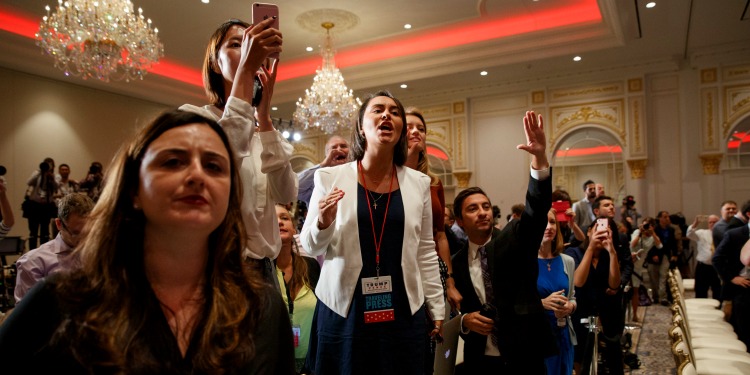