Conservatives who have devoted considerable energy to convincing themselves that Donald Trump’s erratic and irresponsible conduct is excusable—even desirable—have invented what must be a comforting construct:  Their counterparts on the right who remain stubbornly resistant to the president’s advances don’t object to his policies but to his comportment and “manners.”

It’s not true, but let’s assume for argument’s sake that it is; this is an admission against interest. It concedes that the president’s behavior is unequal to the office he holds. In offering this concession, Trump’s phalanx of conservative editorialists and entertainers expose a vulnerable flank. Little “r” republican standards of decency aren’t about maintaining respectful discourse, although civility is also under attack by pro-Trump elites who condescendingly presume that such values are not shared by the salt-of-the-earth folk for whom they pretend to serve as tribune. Civic propriety and the customs by which we govern ourselves are not all codified in law; they are traditions passed down from the Founding generation. Abandon them, and we are bound one day to test to their breaking points the tensile strength of this republic’s institutional safeguards against tyranny.

For conservatives who believe that the enlightened values that have guided the country’s political development for 240 years should not be sacrificed to the fevers of this moment, these are hard days. This month has witnessed a burst of courage among Trump-skeptical Republicans, but this was the bravery of men already resigned to their fates.

Senator Jeff Flake, who has been more consistent than most in his anti-Trump convictions, announced on Tuesday that he will retire at the end of his term. In a blistering speech on the Senate floor and in a subsequent piece in the Washington Post, Flake called on fellow Republicans of conscience to abandon the political calculations that keep them from speaking out against Trump when it is righteous to do so. Flake is a longtime Trump critic, but these days he finds himself in increasingly bold company.

Senator Bob Corker recently said that he, too, will retire. Unshackled, Corker has spent the ensuing weeks implying that the president is so unfit for the office he occupies that every day he sits behind the Resolute Desk is a day we’re all lucky to see to its end.

Earlier this month, two Republican dignitaries—Senator John McCain and President George W. Bush—condemned Trump and Trumpism in no uncertain terms. McCain savaged the “blood and soil” nationalism into which Trump tapped and attacked the fearful, scapegoating isolationism that nationalist reactionaries use to legitimize their prejudices. Bush reminded America that nationalism is nativism in a primordial form, that immigration is a source of dynamism, that free markets and unfettered global trade are fonts of peace and stability, and that bigotry “is blasphemy against the American creed.”

These criticisms of Trump are poignant, but they are being made by men in the twilights of their political careers. Republicans with a future ahead of them are conspicuously quiet. They are not about to sacrifice their careers by criticizing their party’s popular president, thereby painting a target on their back for the entertainers who have made a vocation of confusing personalities with principles. To do so would only hasten the GOP’s transition into a party of populists, who are committed to civic norms and decorum only as long as it is convenient.

Trump critics like Corker, Flake, McCain, and Bush are taking a brave stand, but they’re also sending a regrettable signal to their compatriots in the party. If you’re going to speak your mind about Trump, it will be the end of your political career. That is unlikely to induce more courage. It might even suppress it.

Trump’s fans in the conservative intelligentsia have a point about this presidency. Donald Trump—or, rather, Mike Pence, who inherited the transition team from Chris Christie—have staffed much of this administration with dedicated conservative reformers and competent stewards of the institutions they were tasked to lead. Trump has even defied expectations on some fronts, and the president’s honest conservative critics have praised his actions when the occasion merits. But pretending as though Trump-skeptical Republicans do not object to the president’s friendliness toward protectionism, Keynesian economic prescriptions, and government mandates is dishonest.

Trump apologists are quick to note that this is what “the base” wants. Trump and his movement are an occasionally inchoate response to the GOP’s habit of overpromising and under-delivering. Theirs is an affectation, not an ideology with a governing agenda. And Republicans who fail to recognize the inherent virtue of this paroxysm of raw, directionless angst are the real problem. That’s not leadership. Just the opposite; it’s abdication.

Competent strategists can persuade themselves that the ethical compromises they make today are for the greater good. Committed advocates can assure themselves their opponents are petty, one-dimensional caricatures. Intellectually capable people can convince themselves of things that are not so. Just as Trump’s defenders are assured that their conservative adversaries are animated only by their trifling pretension, discomfited Republicans who hold their objections to Trump in check for fear of offending his voters are also lying to themselves. They are convinced that the fever will pass, that conservatism will endure, and that they serve the country better by being passive officeholders rather than crusaders on the outside. But the outsiders’ ranks are swelling.

There is a war on for the soul of the Republican Party. It seems now that it’s only a matter of time before its members stop pretending they do not see it. 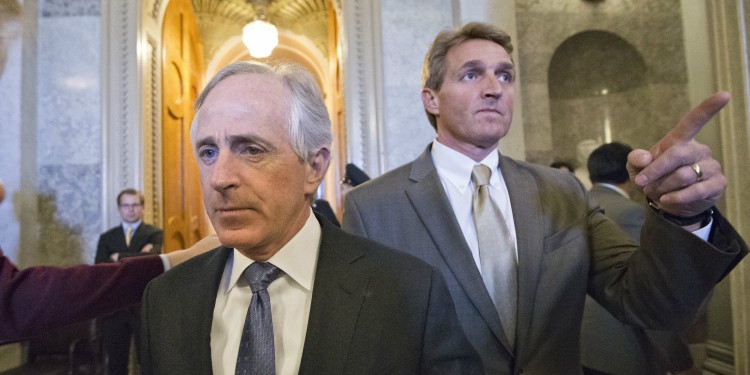