President Joe Biden will not let a few court-administered embarrassments dissuade him from mounting an assault on the separation of powers. The legal setback his administration’s vaccine mandate recently encountered is no exception.

On Saturday, a federal appeals court suspended the enforcement of the Biden administration’s effort to impose a vaccine mandate on private companies with more than 100 employees. The judges empaneled on the Fifth Circuit issued the emergency injunction because they had “cause to believe there are grave statutory and constitutional issues with the mandate.” The court, therefore, temporarily suspended the Occupational Safety and Health Act from imposing fines on businesses that do not either fire unvaccinated employees or subject them to regular COVID testing.

No matter, said the increasingly imperious White House. Deputy Press Secretary Karine Jean-Pierre told employers on Monday that they “should not wait” for the legal process to play out. Businesses should operate under the assumption that OSHA’s “Emergency Temporary Standard” will take effect on January 4, 2022. The date suggests an oddly sluggish pace to implement an “emergency” anything, especially given Jean-Pierre’s labored effort to suggest that this ETS comports with legal precedent around such measures because COVID represents a “grave danger” to workers.

“If OSHA can tell people to wear a hard hat on the job, to be careful around chemicals, it can put in place these simple measures to keep our workers safe,” said White House Chief of Staff Ron Klain over the weekend. In fact, the Fifth Circuit has previously found that OSHA “cannot use its ETS powers as a stop-gap measure” when other effective remedies for unsafe workplace conditions exist or if the costs imposed on businesses and workers are unreasonable. Moreover, a “failure to act may be evidence that a situation is not a true emergency”—like, say, delaying the implementation of an emergency measure for nearly four months after it was announced.

The practical effect of the White House’s effort to convince businesses to comply with its mandate—one which carries steep penalties for firms and individuals that violate its terms—will be to convince the public to ignore the courts. And perhaps that is the White House’s intention. After all, that’s what the president said he hoped to achieve when he disregarded a court ruling that struck down the extension of a moratorium on evictions.

“Are you sure it’s going to pass Supreme Court muster?” Biden was asked in August about his plans to re-issue the defunct moratorium despite the Supreme Court’s warning that it would have to expire. The president’s short answer was, in fact, no. “The bulk of the Constitutional scholarship says that it’s not likely to pass Constitutional muster,” Biden confessed. This wasn’t an unconsidered remark; Biden’s own aides admitted as much to reporters. Nevertheless, the president insisted, “it’s worth the effort.”

It turns out the Court did not appreciate such open defiance of its authority by a co-equal branch. Just three weeks after Biden’s comments, the Supreme Court abandoned its collegial deference to the administration and forcibly halted the eviction moratorium. An executive agency—in this case, the Centers for Disease Control and Prevention—had no authority to unilaterally abrogate property rights in the United States, public health emergencies notwithstanding.

That same Court is likely to have to adjudicate the administration’s vaccine mandate when the Fifth Circuit ruling is appealed. It has previously declined to block state-level vaccination requirements, but legal scholars aren’t entirely sure a federal mandate will withstand the same scrutiny. As Fordham University professor Nicholas Tampio wrote, officials have spent most of the last year calling for unconstitutional proscriptions on the freedoms of those without proof of full vaccination. Even that quasi-legal status is itself in doubt given the likelihood that booster shots will soon become available to all adults, which public health patriarchs such as Dr. Anthony Fauci said will force the administration to amend the meaning of the phrase “fully vaccinated.”

These fluid standards do not make for a reliable and predictable social covenant. That will inform the Supreme Court’s deliberations if asked to weigh in on the Fifth Circuit’s ruling. As it should. A pandemic is no excuse for adhocracy. 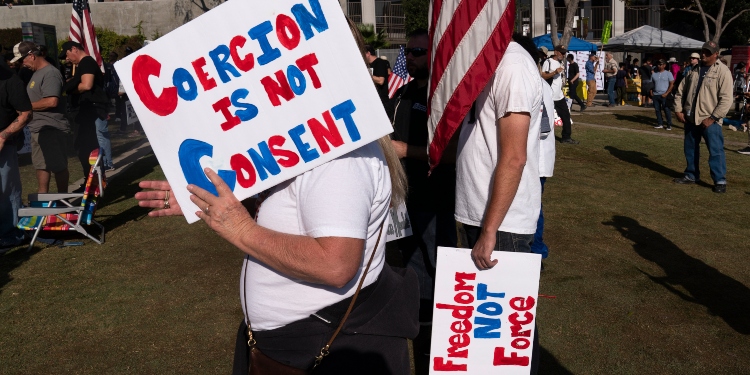