When Americans finally steel themselves for an honest appraisal of the conditions that led to the election of Donald Trump to the presidency, they would do well to direct their attention to the Standing Rock Reservation.

The ongoing protests of the Dakota Access Pipeline are revealing. They are indicative of a crisis of confidence in American institutions and of the erosion of civic virtue on the radical left. The embrace of the protests by liberal lawmakers is evidence of the Democratic Party’s desperation for anything resembling enthusiasm for the liberal program. And the protesters’ ultimate triumph, even if it is only temporary, demonstrates the extent to which liberals have encouraged their violent and lawless elements.

The pipeline—a nearly 1,200-mile conduit designed to transport light, sweet crude extracted from the Bakken formation—was the subject of rigorous study before ground was broken. Environmental impact assessments were made. Historical reviews conducted. The Native American tribes upon whose land the pipeline was slated to cross were consulted pursuant to federal law. Lower and federal appellate courts upheld the view that the U.S. Army Corps of Engineers had done its due diligence. Those who still objected to the pipeline insisted that it jeopardized a historic water source by crossing the Missouri River, but the claim was not found to have legal merit.

Then, in an act of desperate yet civil defiance, a few dozen members of the Standing Rock Sioux tribe started staging protests along the pipeline’s construction route. The protests caught fire on the environmental left. They soon began to snowball, picking up the support of celebrities and elite liberal opinion-makers along the way. What began as an outpost soon became a tent city, with all the associated amenities and semi-permanent structures. Then the violence began.

On September 3, protesters and private security contractors clashed. At least three pipeline workers were attacked and injured, according to the Morton County Sheriff’s Office. Scores of protesters were pepper sprayed or bitten by dogs.

Less than one week later, in response to the controversy, the U.S. Army joined the Department of Justice and the Department of the Interior in announcing a voluntary moratorium on construction “within 20 miles east or west of Lake Oahe” until concerns about the pipeline could be resolved. The concession only emboldened the protesters, who continued to clash with law enforcement over the course of the ensuing weeks while demonstrators occupied federal lands in defiance of police orders to vacate.

On October 27, police moved in to dismantle a roadblock protesters had constructed on a state highway. 141 protesters were arrested that day, bringing the total up over 400. The violence only intensified after the November 8 election of Donald Trump.

On November 20, as demonstrators made an organized effort to cross a local bridge to block another highway, police resisted. What followed was what the sheriff’s office called a “riot” in which 400 protesters clashed with police. Water cannons, tear gas, and rubber bullets were used to disperse “very aggressive” protesters when they “attempted to flank and attack the law enforcement line from the west,” police said. At least one officer was struck in the head during the skirmish. According to demonstrators, 200 were injured in the attack and 12 hospitalized.

On Sunday, in response to the localized unrest, which had been both popularized and lionized in partisan liberal outlets, the Army Corps of Engineers announced it had reversed its own decision on the pipeline. “The best way to complete that work responsibly and expeditiously is to explore alternate routes for the pipeline crossing,” read a statement from the Army’s assistant secretary for civil works.

That wasn’t the whole story, according to NBC News. “Army Corps of Engineers recommended approval of Dakota pipeline easement, but Army civilian leadership decided to deny,” their sources assured them.

So this was a political decision made by political appointees and, as such, it can be reversed by the next administration’s political appointees. Still, the damage may already have been done. Oil exploitation firms operate on generational time scales—30 to 50-year spans in which time an oil source is identified, exploited, brought to market, and eventually yields a profit. The success of these protests will have the effect of making companies reassess the level of risk involved in developing America’s newly discovered pockets of oil and natural gas.

Worse, however, is the Army’s decision to convey to America’s most disruptive elements that violence and disorder works. We can expect to see more of these kinds of disruptive and violent protests. The next round of uncivil demonstrations will, however, occur in a different political culture. They might face an administration more inclined to clear out encampments and round up hundreds on buses. Moreover, for the Trump administration, the threat of politically inconvenient optics arising from such events is no threat at all.

So there will be more clashes between reactionary Luddites who have the temerity to call themselves “progressive” and law enforcement backed by a president with a perceived mandate to restore “law and order.” Ultimately, the drama at Standing Rock has put America on a course toward a reckoning. 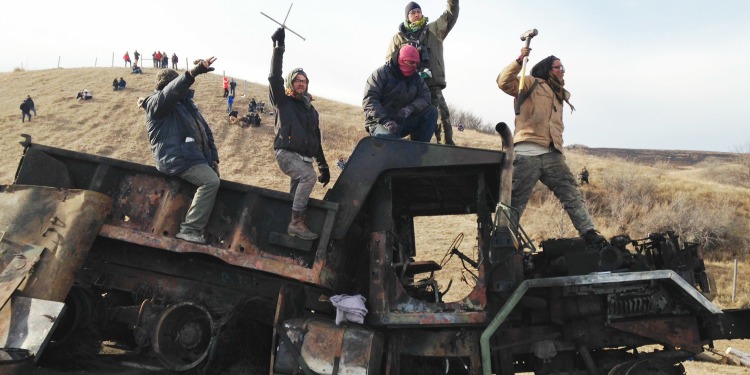