Amid a new spate of bad headlines, Donald Trump’s supporters were provided a welcome reprieve last night from an unlikely source: the New York Times. A steady drip of revelations casting Trump in a negative light began to overtake the news cycle. Conspicuously, most of those stories involved Donald Trump’s links to Russia.

Sources within the FBI revealed that the bureau was conducting an ongoing inquiry into former Trump campaign manager Paul Manafort’s links to foreign governments; specifically, Moscow. A “veteran spy” revealed that the Russian government had been “cultivating, supporting, and assisting Trump” as an asset of the Kremlin for the last five years. It was confirmed that members of Congress were privy to classified briefings from intelligence officials regarding ties between Moscow and Donald Trump. A secret server at the Trump organization had been communicating directly with the Putin-linked Russian financial outlet, Alfa Bank.

All these stories appeared in overtly liberal opinion magazines or center-left journalistic outlets. This cluster of revelations followed a conference call between members of the press and ranking Clinton campaign operatives hammering the theme of links between Trump and the Russian government. Doubtless in response to the cascade of stories linking Trump to Russia, sources within the FBI revealed to the Times they did not believe there were any operational links between the Kremlin and the GOP nominee. More important for Trump, the bank scandal involving DNS traffic between a Trump organization server and a Russian bank was almost certainly innocuous.

That revelation was a godsend for the GOP nominee. By invalidating the implications about the bank in Franklin Foer’s piece at Slate—suggesting basically that Trump was a paid Russian operative—the Times had provided the Republican candidate with a way to lacquer all of the revelations regarding his support for and from Moscow with a veneer of doubt. If one is dubious, so, too, must all of them be suspect.

Donald Trump has spent the last 17 months ingratiating himself with Moscow and serving as Vladimir Putin’s chief spokesman in the United States. This is not without purpose.

Trump began his campaign for the White House by dismissing as commonplace the brazen murder of skeptical journalists and opposition political figures in Russia. “I think our country does plenty of killing,” the Republican said. He has repeatedly insisted Russia is an American partner in Syria, despite the fact that the Russians have prioritized striking CIA-backed assets and weapons depots over ISIS. Trump has contended that the United States has no interest in Ukraine, and Russia’s determination to invade and annex territory in Europe (and to foment a low-boil conflict in the nation’s east) is none of America’s business. He has insisted that NATO is obsolete, that it should focus on operations outside of Europe, that it’s not worth the minuscule cost to American taxpayers, and that the U.S. should not honor its obligations to its allies if they were attacked by Russia.

Trump has surrounded himself with Kremlinists. Before Russia invaded Ukraine, the country was led by Victor Yanukovych—a Putin-supporting kleptocratic vassal managed, in part, by Manafort. Documents recovered after Yanukovych’s ouster by a popular rebellion revealed a “black ledger” on which Manafort’s name appeared 22 times, along with promises for $12.7 million.

The energy expert Carter Page suddenly became a hot commodity in Moscow after joining the Trump campaign. As a Trump advisor, Page was frequently found in Russia delivering anti-Western speeches attacking liberal democracies for antagonizing Russia into invading nations like Georgia, Ukraine, and Syria. Page was saying Putin was a stronger president than Barack Obama well before those words escaped the mouths of Trump or Mike Pence.

Before signing onto the Trump campaign, General Mike Flynn has been a frequent guest on the state-owned Russian propaganda network RT and was Vladimir Putin’s guest of honor at the network’s 10th-anniversary dinner. That position is well earned: When in front of the cameras, Flynn echoes the party line on Putin, Russia, Syria, and American aggression.

This fealty is not a one-way relationship. As Mike Lofgren details in The Atlantic, a global Russian propaganda network is committed to ginning up support for Donald Trump in Europe. Why? Trump’s appeal to the so-called “alt-right,” a white supremacist diaspora, is of particular benefit to Moscow. This new Comintern disseminates agitprop against multiculturalism and egalitarianism and for ethnonationalism. For the alt-right, their misanthropic ideal is a fictional monochromatic and Christian fundamentalist Russia.

If Trump is an agent of chaos who will sow dissension among American allies and lead a U.S. retrenchment, he is useful to Moscow. Even if he is not elected, Trump’s ability to rehabilitate white nationalism in the U.S. and to destabilize its politics is boon enough. Trump, meanwhile, would be unable to finance his business ventures in the West without the credit supplied by Russian banks. This relationship is both symbiotic and calculated.

Desperate Trump fans will point to the dud of the breathlessly reported Alfa Bank story in the hopes that it undermines the innumerable tales of Trump’s links to Moscow. The preponderance of evidence indicates that not only has Donald Trump taken a personal interest in Russia, but that Russia has taken a personal interest in him. Even if Trump loses the election, the many dangers to American security and global preeminence he has already unleashed are indescribable. 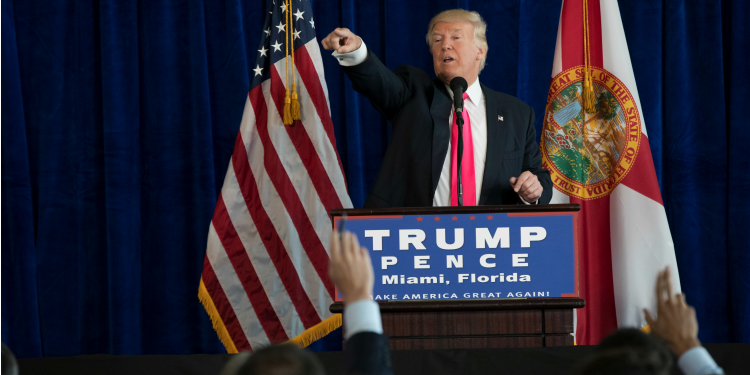