In Syria, the United States and its allies are being humiliated. The ongoing debacle has evolved from an embarrassment to a near total and perhaps irreversible defeat, and the damage done to America’s geostrategic position is so complete that the White House has all but acknowledged its far-reaching consequences.

It wasn’t 16 months ago that Barack Obama reluctantly pledged to engage in the Syrian Civil War he had spent the prior two years trying to avoid. The president drew his now-infamous “red line” for action when it became clear that Bashar al-Assad’s deployment of chemical arms against civilian population centers would not end merely because he had demanded it. “What kind of world will we live in if the United States of America sees a dictator brazenly violate international law with poison gas, and we choose to look the other way?” Obama asked the nation in a prime-time address over a year after he had drawn his line in the sand. Despite the president’s hollow moralizing, that’s exactly what he did.

Russia’s President Vladimir Putin provided Obama with a way to avoid following up on his own commitments by negotiating a phantom truce that would, Americans were told, avert war while simultaneously ridding the Assad regime of its weapons of mass destruction. Neither outcome occurred. Just months after Obama accepted Putin’s Trojan Horse, a virulent terrorist caliphate was born in northern Syria. It soon exploded over the Iraqi border, sacking cities like Fallujah and Mosul – cities that American servicemen and women had died fighting to liberate from Islamist radicals less than a decade prior. Only when the genocide of the Yazidi people was imminent did Obama act in Iraq. Having engaged the Islamic State in the Iraqi theater, the White House was compelled to stanch the flow of Islamist militants into Iraq from its Syrian incubator.

As a fig leaf to mask the president’s shame after reluctantly committing to the reapplication of naked American airpower in the Middle East, Barack Obama revealed that a predominantly Arab coalition of powers would be executing most of the strikes on ISIS targets in Syria. This empty gesture was exposed for what it was weeks later when it became clear that the American-led coalition was also an American-dominated one. With the understanding that no war is ever won from the air, President Obama agreed to the creation of an indigenous force of moderate Arab militias in Syria. “There is no military solution to the crisis,” Obama’s National Security Council spokeswoman averred even as the White House sought $500 million from Congress for the creation of this indigenous force.

The system devised to produce these ground forces was a Rube Goldberg device of infinite and unwarranted complexity. In the end, this considerable sum would be used to train and equip only a handful of rebels, almost all of whom were killed, captured, or had defected by late September of 2015. The implosion of the rebel force strategy did not itself mean that the West’s goals in Syria were lost. By July of this year, Assad publicly admitted that his armed forces were struggling for lack of manpower. At the same time, Western-backed Kurdish rebels in Syria’s north began to advance on ISIS strongholds around places like Raqqa, the caliphate’s provisional capital city. And while the Defense Department rebel-training program was an evident failure, a covert CIA-backed program of training and equipping Syrian rebel forces had enjoyed more tangible successes.

It was Washington’s tepid entry into the Syrian civil conflict that tempted America’s regional and global adversaries to do the same. Washington’s modest application of force in that theater invited rather than precluded an investment in Assad’s regime by his ignoble allies. The Iranians that had been propping up a faltering regime in Damascus for years were soon able to convince the Russians to do the same. Moscow’s brazen entry into the Syrian war was dubbed by the Kremlin an operation against ISIS, but Russian forces almost exclusively targeted U.S.-backed rebel forces and CIA-provided weapons stores.

In response to a modest setback in Syria and a serious challenge to American global hegemony from the Moscow-Tehran axis, Washington is utterly paralyzed. The Obama administration appears to be set on a mortifyingly Napoleonic retreat from the region.

On Friday, the Obama administration revealed that it would end the Pentagon program to train and equip a Syrian rebel ground force. The program’s successor will be “much smaller” training centers in Turkey that will teach a modest group of “enablers” to call in airstrikes. There will be no U.S.-backed ground component to the air war substantial enough to execute the goal of rolling back either ISIS or Assad forces. Meanwhile, the robust Russian air campaign has had spectacular effects insofar as it has revitalized the Assad regime and put the squeeze on Syrian rebels around their stronghold of Aleppo. The Russian drive has also provided ISIS with the relief it needed to go back on the offensive. “In a surprise advance,’ the Washington Post reported, “jihadists routed Syrian rebels from at least five villages and threatened the outskirts of Aleppo city.”

The president’s advisors are contemplating cutting their loses in the face of the challenge to American primacy. The White House has ruled out the prospect of bleeding Russia white in a proxy campaign in Syria and is coming to terms with Assad’s survival in power. Faced with few good options, the White House is reportedly contemplating extricating America from the conflict entirely. “The White House somehow thinks we can de-escalate the conflict while keeping Assad in power,” one incredulous administration official told Bloomberg’s Eli Lake and Josh Rogin.

What a craven display of abject weakness. It is more likely an effort to save face, but the White House may genuinely believe that Russian and Iranian intervention in the Syrian conflict is self-defeating. They will point to the malfunction of a handful of Russian cruise missiles fired from ships in the Caspian Sea or the death of an Iranian Revolutionary Guards Corps general in Syria as evidence of their foresight. This is unconvincing. Russia has demonstrated clearly over the course of the last 30 months that it will press its advantages through force of arms in any theater that Washington appears disinterested in defending. Washington’s ignoble retreat from the Syrian conflict will invite Russia to expand its reach elsewhere, and it will embolden the rest of the world’s revisionist powers to test their luck. Defeat begets defeat, and there will surely be more of it in store for the United States before Barack Obama’s presidency is out. 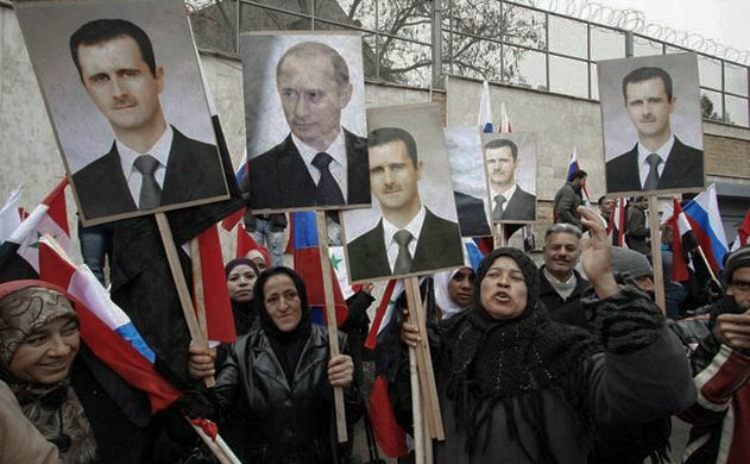