The rise of Donald Trump has yielded a plague of self-doubt among Republican officeholders and opinion makers. The Trump moment has inspired conservatives to submit to an endless struggle session in which columnists critique everything from the GOP’s platform, to its voters and representatives, to each other. The diagnosis differs, but the prescription rarely does: conservatives must change. Well, Republicans on Capitol Hill aren’t listening.

From tax policy to the conduct of foreign affairs, Trump’s candidacy represents a wide-ranging critique of Republican orthodoxy. But the most flagrant way in which congressional Republicans could possibly stick their thumb in the eye of the “Trump Moment” would be to resurrect immigration reform in 2017—and that is what reports say some of them are prepared to do….if the Donald Trump campaign is but a memory.

“I’m going to take the Gang of Eight bill out, dust it off and ask anybody, and everybody who wants to work with me to make it better to do so,” said Lindsey Graham when asked about his plans for 2017. Perhaps Graham was being intentionally incendiary. He has, after all, made a habit of antagonizing the Trump wing of the GOP. Or perhaps he truly believes that the political obstacles to resurrecting something along the lines of that failed bipartisan approach to comprehensive immigration reform will have been obliterated by an anti-Trump wave in November.

While Graham may be among the more enthusiastic proponents of immigration reform, he is not alone within his conference. Politico reported that congressional Republicans across the ideological and geographic spectra are warming to a new drive to reform the nation’s broken immigration system. Why would these Republicans voluntarily plod off into this demonstrably fatal minefield in the middle of a heated election year? The simplest explanation is that they believe that Trump will go down to defeat in a fashion so spectacular that it may take one or both of the GOP’s congressional majorities down, too.

If the Senate is lost, then the comprehensive immigration reform package that Democrats are likely to introduce will make the Gang of Eight’s work appear cautious and circumspect by comparison. Hillary Clinton has pledged to make immigration reform a priority for her first 100 days in office. She has promised to expand on Barack Obama’s executive actions deferring immigration for illegal residents to the extent she can get around the courts. She said she would end private and family detention, accelerate the process of family reunification, and will pursue a pathway to citizenship for illegal residents. Finally, Clinton has insisted that all of this can and should be done without enhanced border security provisions.

If Clinton is bent on securing immigration reform, she will have a partner in Harry Reid’s successor in the Senate. “I think if the election results show that this anti-immigration hostility won’t work politically, people will say let’s get it done,” said incoming Democratic Senate leader Chuck Schumer. He also pledged to make “progressive” immigration reform a priority while giving up on most border security provisions within the original Gang of Eight bill.

For GOP immigration reformers, their bet is a straightforward one. They reckon that the results in November will confirm the findings in the GOP’s 2012 “Growth and Opportunity Project,” aka “the autopsy.” They suspect the exit polls will show that Donald Trump never really had much of an ideological coalition and that he lost the support of minority voters at a rate that outpaced even Mitt Romney’s dismal performance. Democrats will contend that the GOP’s voters wanted to turn 2016 into a referendum on immigration reform, and they lost. Therefore, President Clinton and her party will have won a mandate to pursue a progressive approach to the matter. In that event, at least Republicans in Congress will be armed with a counterargument in the form of an alternative incremental approach to the reformation of the immigration system.

The GOP’s immigration absolutists have always been quick to judge their side’s reformers as a pack of quislings with an unhealthy disdain for the working-class. If reform again becomes the watchword, the usual suspects may take comfort in that pleasing shibboleth. That is, however, a flawed notion. The path of least resistance right now would be for the GOP on the Hill to accept their defeat graciously and concede to every unreasonable demand made by the GOP’s ascendant Trumpist element. Instead, a willful few are standing firm in the belief that history is on their side. They are betting that their pro-Trump opponents have made a fatal mistake, and all they have to do is await their ultimate vindication. They might be right. 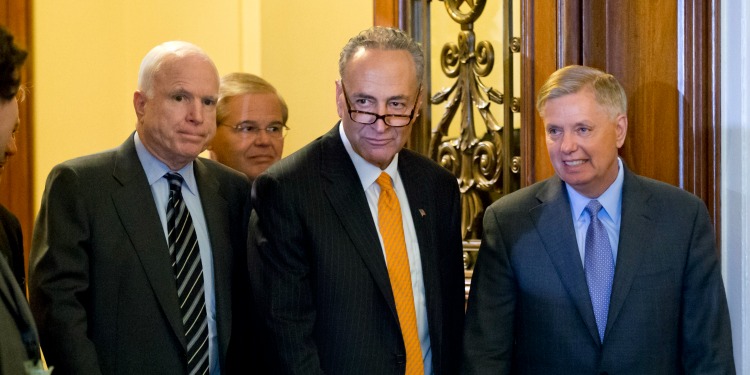