Harvard University Professor Lawrence Lessig has apparently determined to serve as the living, breathing case against lifetime tenure. These days, the professor seems far less interested in educating (“tinkering on the margins of the small arguments,” he called the job of shaping young minds) than he does in crusading. Specifically, the source of his ire is the set of circumstances unleashed by the Supreme Court’s 2010 decision in Citizens United.

“This is the moral question of our age,” Lessig averred in 2014. In that speech, he compared the evils abetted by Citizens United to Jim Crow laws. “Can we reclaim our democracy?” Lessig asked. Ironically, in order to achieve his goal, he created his own political action committee – Mayday PAC – that was designed to elect legislators that would pass new campaign finance reforms and reverse the effects of the Supreme Court’s ruling. The group spent $10 million in 2014 with the aim of preventing big-dollar donors from exerting undue influence over the political process. Almost every Mayday-backed candidate lost.

Undaunted, Lessig has determined to transform himself into a celebrity martyr for his cause. To do this, the Harvard professor is running for the Democratic Party’s presidential nomination with the hopes of securing it, winning the general election, taking office, and signing a set of campaign finance reforms into law at which point he will resign the presidency. If that sounds ridiculous to you, congratulations! You’re not a dogmatic ideologue with an irrational fear of money in politics. For millions of well-meaning Americans, though, the influence that prominent donors can wield over the political process is a grave and pressing concern. Those fears, while not invalid, are misplaced.

The Super PAC era was billed by those who feared it as a period in which profligate billionaires would control both candidates and the political process, leaving the average citizen out in the cold. If the race for the Republican presidential nomination in 2016 has demonstrated anything, however, it is that, even in the era of well-funded PACs, outside money alone cannot keep a candidacy that does not enjoy popular support afloat. What’s more, you still cannot buy first place in the polls.

“Gov. Scott Walker of Wisconsin was among the most successful fund-raisers in his party, with a clutch of billionaires in his corner and tens of millions of dollars behind his presidential ambitions,” the New York Times reported on Tuesday. “Super PACs, Mr. Walker learned, cannot pay rent, phone bills, salaries, airfares or ballot access fees. They are not entitled to the preferential rates on advertising that federal law grants candidates, forcing them to pay far more money than candidates must for the same television and radio time.”

Former Texas Governor Rick Perry was equally cash-starved by the time he dropped out of the race. Despite reports that Perry’s PACs had raised $17 million in July, Perry’s candidacy did not survive another 8 weeks. The Times noted, in fact, that those who are fixated on PAC donations are missing a much larger picture that would provide them with some reassurances about the egalitarian nature of the American political process. “Much of the Republican donor establishment is waiting on the sidelines for a clearer picture of the race to emerge, hampering candidates’ efforts to bring in hard money, currency that a campaign needs to survive,” the Times dispatch read.

The scale of the threat posed by Citizens United to the very foundations of democratic republicanism is inversely proportional to the passion with which it is denounced.

“Allowing corporate influence to flow unfettered into federal campaigns will only undermine the confidence the American people have in their government,” Colorado Senator Michael Bennet said. Connecticut Representative Rosa DeLauro insisted that the Court had “opened the floodgates to a hostile corporate takeover of our democratic process.” “The Supreme Court in essence has ruled that corporations can buy elections,” said the always sober and measured Representative Alan Grayson. “If that happens, democracy in America is over.”

Fortunately, Democracy persists. Don’t expect Democrats to acknowledge as much. Just over one year ago, Senate Democrats voted to advance a constitutional amendment that would revise the First Amendment to the Bill of Rights so as to prevent corporate interests from contributing as much as they see fit to political causes. It was an amendment submitted for consideration by Vermont Senator Bernie Sanders, a self-described socialist who now finds himself at the top of the polls of Democrats in Iowa and New Hampshire. For the Democratic Party, the myth of Citizens United is too valuable to be undone by inconvenient truths.

Truths, however, speak for themselves, and it would seem that the dangers of a post-Citizens United America have been greatly exaggerated. Democracy has been saved. Mirabile dictu! So, why aren’t liberals celebrating? 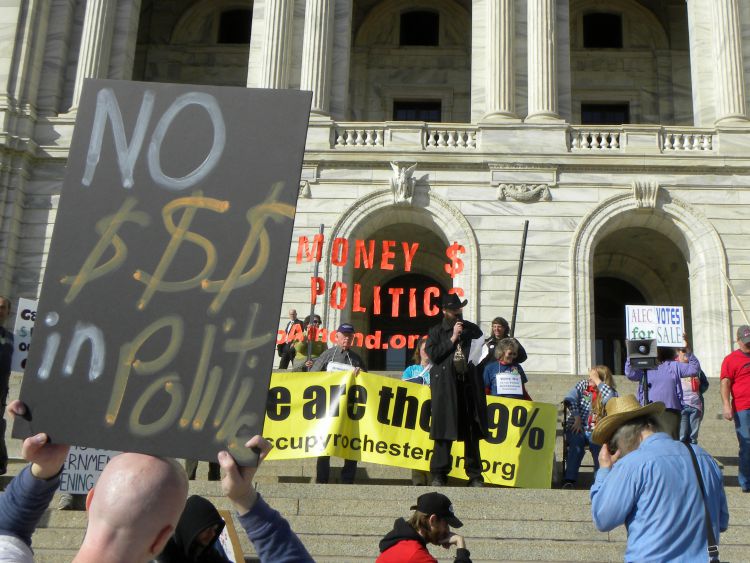