Like forcing a dry bulk container ship into a 180-degree turn, much of the nation’s political press is only beginning to shift their attentions away from the GOP and to that other unruly presidential primary. Though the presumptive Republican presidential nominee is not acting like it, the race for the GOP presidential nod has been over for weeks. Similarly, the outcome of the Democratic Party’s primary likely became a foregone conclusion by mid-March, but Bernie Sanders refuses to acknowledge the obvious and give up the ghost of his surprisingly potent challenge to Hillary Clinton. That dynamic is exacerbating impassioned divisions within the Democratic Party’s ranks that are growing more intense with each passing day. It’s in the data; everyone can see it. But this revelation does not make it into headlines on the nation’s front pages, in part because political observers expect this temporary chafing among Sanders supporters to heal. But will it?

A blockbuster Fox News survey released on Wednesday that showed Clinton trailing Trump nationally with 42 to 45 percent scrambled a media narrative that had for so long taken Trump’s vulnerabilities in a general election at face value. It is almost certain that Trump, like his last two Republican predecessors, is enjoying a bump in the polls as a result of having defeated his competition and all but secured the GOP nomination. But a deeper dive into that survey suggests that this condition should only last as long as the Democratic Primary remains as bitter and divisive as it is right now.

That survey found a majority of Americans have a favorable opinion of President Barack Obama (which, if it holds into November, will make convincing the public to support radical change in the form of President Trump a hard sell). 89 percent of Democrats have a favorable view of the president’s performance in office, but just 83 percent of self-described Democrats say they would vote for Clinton over Trump in the fall. 11 percent of self-described Sanders backers told Fox’s pollsters they would back Trump over Clinton in November. That survey also found Clinton securing her lowest favorability rating in the history of that survey, down to just 37 percent from a 2012 high of 63 percent. Nearly a quarter of self-described Democrats say they have an unfavorable opinion of Clinton. A third of self-identified Democrats do not believe Clinton is “honest and trustworthy” and 47 percent said it was accurate to claim Clinton “will say anything to get elected.” In short, the poll found Clinton reaching the nadir of her popularity among her fellow Democrats.

The verdict on Mrs. Clinton from her fellow party members is even more damning in the latest CBS News/New York Times poll released on Thursday. 28 percent of Sanders-backing Democrats told pollsters they would not support Clinton if she won the Democratic presidential nomination. Meanwhile, eight in ten Republican voters say that their party should unite behind Donald Trump even if they disagree with him, and the celebrity candidate’s favorability rating among Republicans is on the rise.

That poll also provided a clue that partially explains why the nation’s political observers seem inclined to dismiss this intramural Democratic tiff as just a passing phase. “While 72 percent of Mr. Sanders’s supporters say they would vote for Mrs. Clinton in the Fall, a Times/CBS News survey taken in early May of 2008 found that only 60 percent of Mrs. Clinton’s supporters said they would vote for Barack Obama in the general election,” the Times reported. That bitterness did not linger; wounds healed and the Democratic Party united behind Obama. The widely shared presumption is that Democratic confidence in Clinton will rebound when all parties agree that the presidential primary is over.

While there was plenty of bad blood between Clinton and Obama, not to mention between their respective supporters, Clinton circa 2008 was never as inclined as Sanders is today to take the party down with him. Clinton never tacitly endorsed the work of the agitators among her supporters who sought to hijack the process. Clinton supporters never orchestrated a campaign of threats directed at party officials who did not certify her delegates. State-level parties never lodged formal complaints with the Democratic National Committee against the Clinton campaign for its unruly behavior. Clinton never issued ultimatums against her own party if its voters nominated Barack Obama. Clinton never deluded her supporters into believing that there was a pathway to the nomination for her at a contested convention in Denver, despite the fact that such an outcome was an obvious impossibility.

Bernie Sanders, a professionally quixotic independent senator who geared his career toward serving as a critique of the nation’s liberal establishment, has little allegiance to his adopted political party. The Vermont senator’s behavior today is a window into what the GOP would be wrestling with if their outsider insurgent candidate had not prevailed. The Democratic divide may repair itself after the nominating conventions, but what if it doesn’t? The Boston Globe’s James Pindell observed that neither Trump nor Clinton is particularly obliged to reassemble the traditional Republican and Democratic coalitions, and both can afford to shed some support at the margins if they can replace those disaffected loyalists with new or converted opposition voters. Citing a recent CNN/ORC survey, Pindell noted that the source of both Clinton and Trump’s strength in the polls is one another: “A majority of Clinton voters (51 percent) said they were really voting against Trump, while 57 percent of Trump voters said they were really voting against Clinton.” If it’s a negative election, who is to say that negativity will not persist well into the autumn?

The Democratic presidential primary will end. It may not be too late to heal the rifts associated with the extended contest when it does. The presumption that those fissures will automatically heal is, however, predicated only on presumptions based in the experience of political observers in more conventional election cycles. If there has been one lesson of 2016, it is that the old rules do not apply. 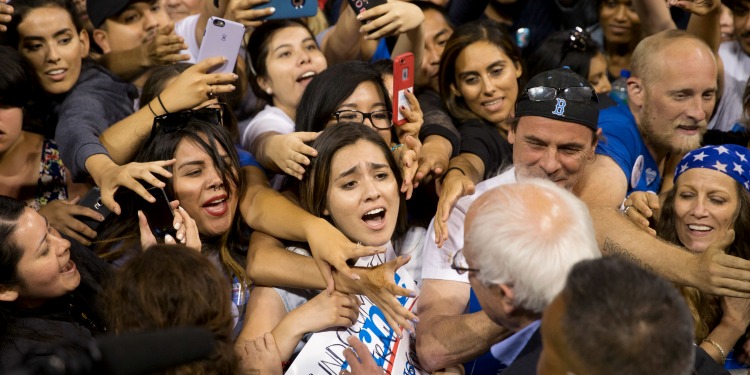