“Yes, the Republican Party has become pathological,” the 2017 Vox.com headline presumed. “But why?” The article, naturally, wastes no time proving the hypothesis. For almost a decade, a cottage industry had been building around the demand for analysis demonstrating how the Republican Party had become too extreme. Not too extreme for voters, of course. By the time Vox got around to the subject, the electorate had delivered control of every lever of power in Washington to the GOP. No, the real problem is apparently the structural latticework of American political conventions, which allowed a party that was so invested in unpopular policy preferences to defame and disqualify their more popular opponents.

This allergy to introspection on display is now reaching epidemic proportions. For all the lectures about how Republican voters had supposedly sequestered themselves in self-radicalizing cloisters, Americans on the left of the political spectrum are just as disinclined to audit their own views. But they may not be able to avoid critical self-examination for long. Democratic voters are increasingly adopting a brand of extremism all their own.

Donald Trump’s opponents recently reveled in the fact that a majority of Americans surveyed in a poll sponsored by the president’s favorite network, Fox News, agreed that Trump’s “go back” tweets constituted a “racist” attack on his opponents. What they did not dwell on is this: The poll found myriad policy positions that are well within the mainstream of the Democratic Party but anathema to most Americans.

Would it be a “good thing” if the United States became a little less capitalist and a little more socialist? Fifty-three percent of Democrats agreed with this statement, compared to just 34 percent of the public. Should undocumented immigrants be eligible for health insurance? Only 32 percent say “yes,” along with a majority of self-described Democrats. How about “decriminalizing” illegal border crossing? A plurality of Democrats (49 to 42 percent) are on board, but they have the support of only 35 percent of the public. This isn’t the only poll to find the Democratic base out of step with the country. Among all adults polled this month by Gallup, only 29 percent believe the U.S. should commit to providing the descendants of African slaves with reparations in the form of wealth transfers. Two-thirds of all respondents are opposed, but a slim plurality of Democrats (49 to 47 percent) disagree with the majority.

Democratic office seekers, particularly those pursuing the party’s presidential nomination, are perfectly willing to tailor their policy preferences to their party’s ascendant extremists. Bernie Sanders has devoted precious time on the campaign trail to stripping “socialism” of its stigma. Elizabeth Warren and Julián Castro advocate changes to the criminal code that would make illegal entry into the U.S. a civil offense. At least six presidential candidates have endorsed slavery reparations in one form or another. Nearly half of the sprawling field of 2020 Democratic candidates support giving illegal migrants access to health insurance with full benefits, though “moderates” like Vice President Joe Biden can’t commit to anything more than partial benefits for non-citizens.

The Democratic Party’s leading lights have already shown little willingness to abandon their unpopular policy preferences even when confronted with their unpopularity. Sen. Kamala Harris ignited a small furor when she voiced her support for one of the core planks of Bernie Sanders’s Medicare-for-all legislation: forcing the 180 million Americans on employer-sponsored health insurance into a government-run monopoly. Most Americans remain satisfied with their employer-sponsored health insurance, and support for single-payer plunges when voters learn there are tradeoffs associated with providing insurance to the few million Americans who are ineligible for coverage. Harris bobbed and weaved, eventually settling on a proposal that would impose single-payer on the nation over the course of ten years (apparently, some believed you could universalize an overstressed entitlement program and eliminate a $600 billion-per-year industry overnight).

The Democratic presidential field appears so committed to radical one-upmanship that they’ve even begun embracing policies that have the support of no constituency whatsoever. Every Democrat in the race for the White House in 2020 has, for example, endorsed making Washington, D.C. the nation’s 51st state—an idea that most Americans oppose regardless of ideology, party affiliation, or region.

Democrats could counter with a number of surveys that purport to show that their party’s increasingly radical agenda is, in fact, quite popular. Voters do appear open to Democrat-backed proposals like single-payer health care, a federal jobs guarantee, tuition-free college, and a universal basic income. But like Medicare-for-all, it doesn’t take more than a cursory glance under the hood to see how costly these proposals would be, how likely they are to fail on their own terms, and how successful Republican efforts to pillory them will be. Ideologues and neophytes might dismiss these risks, but a seasoned political hand like Biden should be more cautious. His recklessness is a testament to the new leftward orientation of his party’s ideological center of gravity. 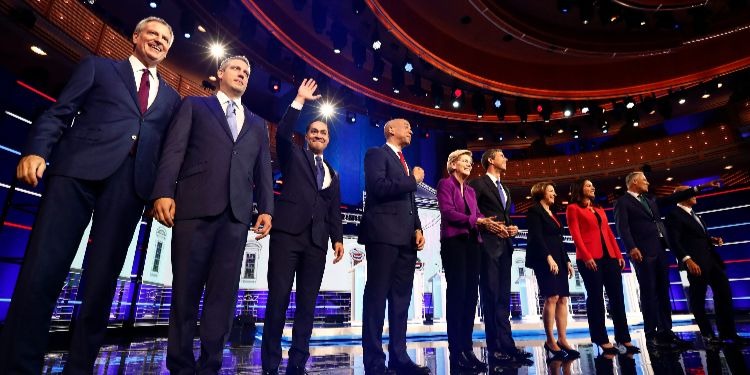