For Democrats, the most significant political story of 2019 was one that many of the party’s members didn’t want to acknowledge: Democratic voters were nowhere near as progressive as were most of the party’s presidential candidates.

Steeped in the stultifying online environment, the Democratic Party’s presidential aspirants sacrificed their promise by appealing to identity obsessives and communitarian radicals. Kirsten Gillibrand thought the nomination could be won not by demonstrating a command of the issues but by pandering to women with embarrassingly obsequious flattery. Promising to seize America’s guns and decriminalize illegal border crossings did Beto O’Rourke no favors. Kamala Harris followed Twitter’s progressive influencers down whatever ponderous rabbit hole captured their attentions. Elizabeth Warren surrendered her image as the bookish policy wonk by advocating the partial nationalization of the health insurance industry, forgiving the debts of her party’s most favored constituencies, and funding it all with the extraconstitutional expropriation of private property. Democratic voters just didn’t care what Julian Castro’s preferred pronouns were.

The last progressive standing was the first: Bernie Sanders. But even his appeal among Democratic primary voters seems from polling inelastic and limited. By contrast, candidates like Joe Biden—who refused to pander to Twitter’s intellectually inbred feedback loop, much to his campaign’s consternation—and Pete Buttigieg—a progressive who presents himself as a born-again moderate—have outperformed expectations.

Among Democratic presidential candidates, the reaction to the Trump administration’s decision to take the blood-soaked commander of a U.S.-designated terrorist group off the battlefield (where American troops have been under fire for months) was greeted with universal trepidation. It’s not clear, however, that Democratic voters are as gloomy about the effort to degrade Iran’s capacity to execute direct and indirect attacks on the U.S. and its allies. Polls conducted in the wake of the strike that neutralized Qasem Soleimani suggest that voters are concerned about what happens next, and they don’t trust Trump to competently manage a crisis. But it’s not at all certain that they are as weak-kneed about confronting the Iranian threat as are some of their representatives.

Among general election voters, polling relating to the Soleimani strike has so far indicated that the issue does not mirror America’s partisan divides. A Huffington Post/YouGov poll conducted from January 4-5 found voters approved of the strike by 43 to 38 percent. A January 5-7 Economist/YouGov survey showed voters backed the strike by 44 to 38 percent. Reuters/Ipsos’s January 7-8 poll showed 42 percent of voters supported the strike while just 33 percent opposed it. If support for Trump’s actions in Iraq essentially mirrors his job approval rating, opposition to it most certainly does not. And while the press is more inclined to play up these polls’ findings below the topline (“Americans say Soleimani’s killing made U.S. less safe, Trump ‘reckless’ on Iran” was how USA Today characterized a poll that found only one-third of voters oppose Trump’s actions), the nuances these surveys uncovered are far more intriguing.

Another Reuters/Ipsos survey conducted from January 3-6 indicated that the deep reservoir of mistrust that has characterized Americans’ views toward Iran for the better part of a half-century persists even among Democrats. When asked if Iran represents an “imminent threat” to the U.S., a substantial plurality of all voters—41 percent—agreed. The number of Democrats who agreed with that sentiment precisely tracks with the country as a whole: 41 percent. Huffington Post/YouGov confirms that Democrats and Clinton voters are more inclined to view Iran as a “very serious” threat to the U.S. than even Trump voters and Republicans.

This isn’t necessarily the product of a news cycle dominated by Iranian aggression. A Fox News poll from July found that 57 percent of Democrats (and 60 percent of all respondents) said: “Iran poses a real national security threat to the United States.” And while 42 percent of Democrats oppose “taking military action to stop Iran from developing nuclear weapons,” 38 percent support such an operation. Most polling on Iran over the course of the year presents analysts with an intuitive conclusion: Democrats are far more inclined to oppose military action against Iran than Republicans. But those surveys also suggest that the voting public, including Democrats, will support such a contingency under the right circumstances. It’s not hard to make the case that Iran’s months-long campaign of direct and undeniable attacks on Americans and their allies in the region meets those conditions.

That nuance is lost in the Democratic Party’s response to the crisis that has come to typify the opening days of 2020. Even among the party’s voices of moderation, it is fashionable to blame Trump even for reckless Iranian provocations like the downing of a commercial airliner on the night of January 7. According to Pete Buttigieg, for example, the blame for Iran’s mistaken attack on a plane full of Iranians taking off from an Iranian airport amid an entirely unreciprocated Iranian volley of rockets targeting U.S. troops 500 miles away should be laid at Trump’s feet.

Democrats are betting that their voters, much less all voters, are more or less inclined toward pacifism in the face of manifest threats to U.S. interests abroad, but the polling does not support that conclusion. Just as Democrats eventually learned that Medicare-for-all wasn’t the surefire winner its consultant class believed, they may soon discover that Americans are not as squeamish about killing terrorist commanders as they presume. 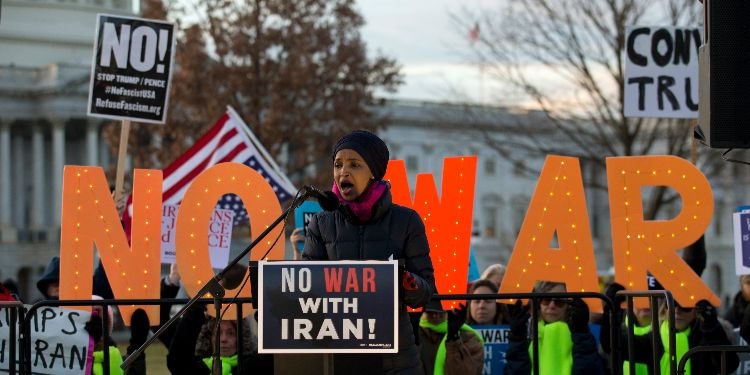