In his effort to drum up support for the nearly $2 trillion COVID relief package meandering its way through Congress, the Biden White House’s unusually forward-facing chief of staff, Ron Klain, has engaged in some rhetorical sleight of hand. The bill, he insists, is “bipartisan.” Not in the definitional sense, of course, insofar as representatives of one of America’s two parties in Congress remain largely skeptical of the proposal. In Klain’s poetic reimagining of the word, “bipartisan” describes the level of support the package receives in polls from both self-described Democrats and Republicans.

Klain’s prestidigitation is a clever act. Who doesn’t like bipartisanship? At a time when the country’s divisions are on full display, only a true misanthrope would stand athwart this outbreak of interparty collaboration. But by resting his argument not on the bill’s immutable features but the shifting winds of public opinion, Klain and his fellow Democrats are playing a dangerous game.

The agony of the Bernie Sanders wing of the Democratic Party notwithstanding, the Senate parliamentarian’s verdict, which will strip the COVID relief bill of one insurmountable sticking point—hiking the federal minimum wage to $15—must have been welcome news in the Biden White House. The conventional wisdom is now that the bill is on a glide path toward passage. Again, who can resist the demands of two-thirds of the voting public? And Democrats have every reason to anticipate that the bill will be a political benefit well into the 2022 midterm cycle.

If it’s popular now, just wait until its stimulative effects begin to be felt. Even if its economic impacts are more muted than the bill’s boosters expect, financial forecasters expect the American economy to grow at a fantastic rate in 2021 as the pandemic recedes and a year’s worth of pent-up demand manifests in consumer spending. If that bonanza isn’t directly attributable to stimulus spending, so what? Democrats will take the credit for it anyway, much as they have for the COVID vaccine regime they inherited. There are no downsides. Right?

Perhaps. But the bill as it is currently written provides its critics with ample opportunities to sever its effects from the economy’s performance. Some of those pitfalls could have an unexpectedly long tail.

Take the “relief” provided to federal workers who are experiencing hardships associated with school closures. The “Emergency Federal Employee Leave Fund” within the “American Rescue Plan Act” sets aside $570 million for federal employees who are the parents of school-age children so long as their “place of care” is closed or hybridized. Full-time employees of the federal government can claim up to $1,400 per week until September 30 so long as their children are shut out of their public (not private) school.

But why are their children not in public school? In Washington D.C. and the surrounding counties in Virginia and Maryland, it’s not out of deference to the vicissitudes of the pandemic. Those schools are closed because the unionized educational workforce wants them to be closed, and they have been particularly obdurate about it. In Fairfax County, Virginia, for example, the school system demanded and received high-priority placement for teachers and administrators on the list of vaccine-eligible workers. But then the goalposts moved. Suddenly, the local union began insisting that normalcy couldn’t return until students were vaccinated, too. But the vaccine hasn’t even been approved for children, and that isn’t likely to change until early 2022.

If past performance is indicative of future results, when we finally reach that milestone, you can bet that there will be some new stipulation that will perpetuate the pandemic’s status quo. Now add to this dynamic a carveout for federal workers that creates financial incentives to keep children out of school.

Let’s call this what it is: A conspiracy of Democratic interests rewarding each other for nonperformance at the expense of the general public. That is the sort of thing that cuts through the clutter. Republicans will have an honest and valid grievance to litigate, and it is one that can and should be evaluated entirely independently of how the economy is performing.

Klain’s determination to hang his hat on the polls could easily come back to bite him if provisions like these become law. It’s not hard to imagine a backlash against such a shameless payout for federal workers—one that is designed not to get America back to “normal” but to preserve the present abnormality in amber. What’s more, you could certainly see that backlash earning the support of a handful of Democratic poll respondents. In that event, Republicans would have every right to claim the outrage over Democratic gamesmanship was overwhelming, intractable, and truly bipartisan. And who could argue against that? 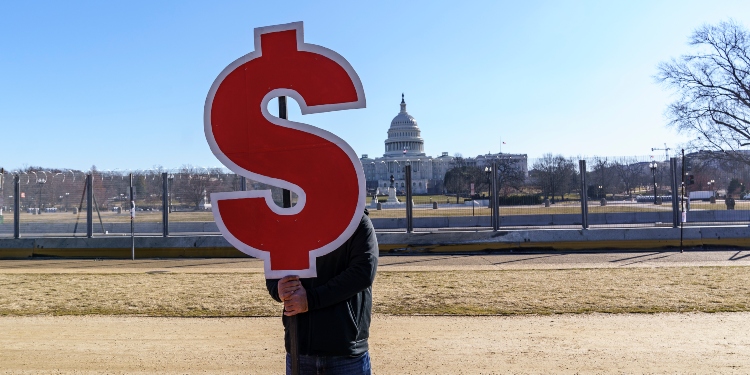