The Democratic Party can take away at least one clear conclusion from the aftermath of their 2016 losses: You can put off the autopsy, but that won’t stop necrosis.

The Democrats are consumed by in-fighting, though this is masked by endless expressions of anxiety over their opponents’ policies. To the extent that Democrats have identified a way to recover from an election that saw so many of their core voters defect or decline to cast a ballot, it has been to again appeal to the labor voter who couldn’t care less about the American left’s addiction to identity politics. But the liberal activist class is ready to bolt if Democrats become a party that welcomes—yuck!—social conservatives again. Bernie Sanders and his semi-socialist wing is trying to excise centrism from the party by making support for government-run health insurance programs a “litmus test,” much to the consternation of Democrats tasked with winning back control of Congress.

Among the few things Democrats seem to agree upon is that their core message must be an anti-Trump message. It’s the execution that’s been the problem. Democrats are pretty sure that they will benefit from frustration with an unpopular executive and his party’s failure to govern effectively. Beyond the broadest strokes, however, there is confusion among Democrats as to how they should go about making themselves an anti-Trump vehicle. The opposition party is occasionally guilty of leaving observers with the impression that they resent even having to make an effort.

Take, for example, Chicago Mayor Rahm Emanuel’s attempt to crystallize Democratic antipathy toward the Trump administration’s illegal immigration policies into some sort of coherent and actionable prescription. The city is suing the Justice Department in the effort to prevent law-enforcement officials from withholding federal grant money as a result of its status as a “sanctuary city.”

Attorney General Jeff Sessions’ attempt to compel sanctuary cities—municipalities in which illegal immigrants have some reassurance about their status as residents so that they can maintain a cooperative relationship with local law enforcement—has encountered resistance in the courts. But the Trump administration is its own worst enemy on this matter, as well as most others. Democrats barely register as a nuisance, and they only have themselves to blame for that condition.

“Democrats have yet to find a smart way to concisely explain why cities that don’t fully cooperate with federal law enforcement should still expect to get federal grant money,” wrote Axios reporter Jonathan Swan. “Emanuel is trying to lead the way here.”

Is there a good messenger for this message? It’s certainly not Rahm Emanuel, who is under fire for overseeing a police force mired in accusations of corruption and anti-minority bias. Maybe it’s not the messenger; maybe it’s the message. Perhaps Democrats have failed to craft a compelling case against the GOP’s antipathy toward sanctuary cities because they resent having to make an argument at all.

“It is a welcome mat to racism,” said Democratic Rep. Pramila Jayapal when an anti-sanctuary cities measure went before the House earlier this year. Amid debate in the House, Democratic Rep. Ted Deutch insisted that the GOP’s proposed immigration plans were “inhumane and un-American” and merited no debate.

Surely these Democrats speak for many of their grassroots compatriots. If your opponents’ position is racist, it is also unthinking and, therefore, illegitimate. Why should anyone devote their time to crafting a compelling argument designed to counter a claim that is rooted in abject bigotry?

The idea that there is only one legitimate opinion on an issue is liberating. For those who convince themselves that theirs is the only righteous point of view, engaging their opponents would mean giving unacceptable opinions a platform they don’t deserve.

“There are not two sides” of the issue of same-sex marriage rights, said BuzzFeed editor Ben Smith when defending his publication’s attack on two popular HGTV hosts on the mere suspicion they may harbor unspeakable opinions.

“[T]here are some stories which do not have two sides,” wrote former CNN producer Hardy Spire. “The climate change debate is one of them.” This claim, written in 2014, was made to reinforce the notion that Republican Rep. Marsha Blackburn had no business debating with “scientist” Bill Nye. Nye now hosts a ludicrous Netflix program promoting multifarious notions of social justice while Blackburn chairs the U.S. House Energy Subcommittee on Communications and Technology.

The condescension that is now in vogue on the left that Trump voters must be convinced not to cast ballots “against their interest” (presuming their interests are best served by an ever-expanding welfare state and a crippling tax burden on their prospective employers) frees liberals from having to engage Trump supporters honestly. They have convinced themselves that anyone who doesn’t share their point of view is the electoral equivalent of a pack mule.

For the left, this comforting contrivance has become a security blanket. Liberals have grown more convinced of the singular legitimacy of their beliefs even as they watch their works crumbling around them at an accelerating pace. Assuming bad faith in your political opponents is, though, a relatively painless way to go through life. Maybe that’s all that really matters. 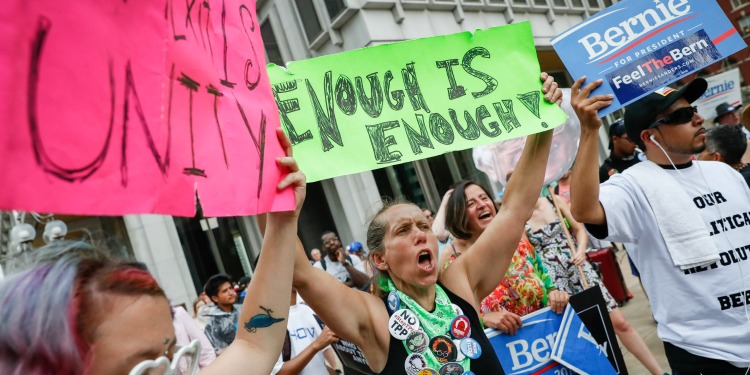