In the effort to reassert some influence over negotiations involving the breadth and scope of Coronavirus relief legislation, Republicans made a bad bet. They played politics, cynically appealing to the threat posed by a ballooning debt at a time when fiscal prudence is a tertiary concern. Republicans were duly savaged in the press and, ultimately, retreated from this indefensible terrain. The magnitude of the crisis demanded it. Democrats observed all this and promptly went about making all the GOP’s same mistakes.

On Sunday night, and again on Monday afternoon, Senate Democrats failed to support a motion to open debate on a massive $2 trillion economic assistance bill. That bill, a product of bipartisan negotiations, briefly collapsed amid what the minority party claimed were provisions that provided big corporations with too much relief and not enough oversight. But hours before Sunday night’s vote, House Speaker Nancy Pelosi inserted herself into negotiations by promising to introduce her own relief bill that would compete with the Senate’s version, helping to scuttle an emerging consensus in the upper chamber of Congress. It was one of the most politically ill-considered documents this crisis has yet produced.

The House legislation was loaded up with giveaways and sops to favored Democratic interest groups. The bill included $33 million for NOAA, $100 million to NASA for “construction and environmental compliance,” $300 million for PBS, $500 million for the Institute of Museum and Library Services, $90 million to fund AIDS research, $35 million to the Kennedy Center for the Performing Arts, and even a conspicuous $7 million to a Washington D.C.-based charter school to “prevent, prepare for, and respond to coronavirus.”

That bill would compel struggling airlines to substantially offset their carbon emissions. It would force the firms that received relief to “maintain officials and budget dedicated diversity and inclusion initiatives.” It would establish programs to “expand the use of minority banks and minority credit unions,” and require federal departments to utilize their services. It would bail out the U.S. Postal Service and strengthen collective bargaining rights for public-sector unions. It would establish federal guidelines for early voting and same-day voter registration.

Some of these are doubtlessly worthy goals. Others are shameless panders to pro-Democratic interest groups. Most of these provisions are of little relevance to the Americans suffering amid an acute crisis that demands immediate action. Pelosi’s intervention in the process was a reckless act that contributed to yet another day of bloodletting on Wall Street. What mass delusion led Democrats to presume that such an odious document would do anything other than backfire on them? Possibly the same assumption that led Democrats to corral themselves in a box canyon in January of 2018: that the press would always come to their rescue.

Then, amid an impasse over the fate of Barack Obama’s Deferred Action for Childhood Arrivals (DACA) program, Democrats engineered a government shutdown with the expectation that they could control the narrative and secure a quick political victory. They counted on the press to overlook the fact that Democrats had demanded the restoration of long-term funding for the Children’s Health Insurance Program from Republicans and, when they got it, voted against it. They counted on the voters, to say nothing of the party’s more moderate members, to be as committed to the legal status of illegal immigrants as the party’s activist class. They counted on the conventional wisdom, which held that the GOP, as the party of limited government, would always get the blame for a government shutdown no matter which party was truly responsible for it. All those assumptions collapsed under Democrats, and, within days, the party sued for peace.

Perhaps Democrats operated under the same presumptions that failed them in 2018. Maybe they expected the press to forgive the obscenities in the House bill because, as Majority Whip James Clyburn reportedly said, “This is a tremendous opportunity to restructure things to fit our vision.” Certainly, some reliably complacent venues like the New York Times editorial board complied, but the risible effort appears to have dissuaded more reputable institutions from following suit. Whatever the flawed premise under which Democrats were operating, its implosion was swift. By Tuesday morning, Pelosi had suddenly warmed to the bipartisan Senate bill. If Democrats have benefited at all from the beneficence of the press, it’s that they’ve managed to avoid being reprimanded for their callousness and scorned for their ignominious retreat. 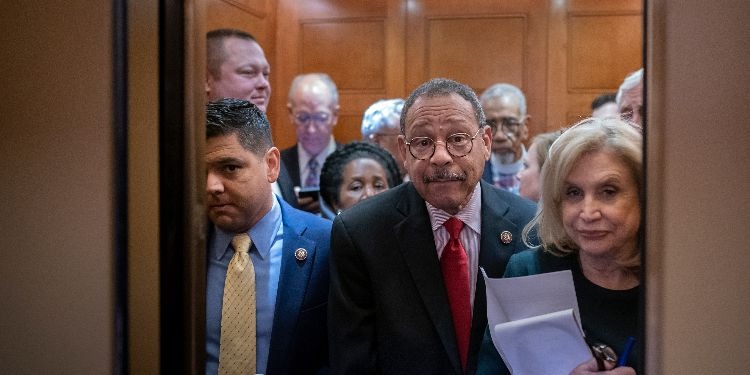