Americans may have thought that the darkest moment of the 2016 presidential campaign — a spate of violence between pro-and anti-Trump supporters at a Chicago rally for the presumptive nominee in March — was an unfortunate but never-to-be-repeated event. Today, they know this was not a unique occurrence.

That spasm of violence was a dead canary in America’s civic coal mine. Whereas in March, there was reason to blame both sides for the ugly behavior of two charged mobs, there is only one group to blame for the disgusting and dangerous outburst that occurred last night in San Jose, California. While Democrats did not incite a crowd of anti-Trump rioters to violence, they are the beneficiaries of their support. What’s more, this is behavior the left in America has incubated and excused for years. It is thus incumbent on Democrats to state clearly and unequivocally that this is their baby, and they disown it.

The reporters present on the streets of San Jose could scarcely believe what they were witnessing on Thursday night. Burning American flags while honoring the Mexican national banner, a horde of agitators descended on a Trump event and targeted average Trump supporters with violence. The images out of the scene are traumatic. One woman was pelted with eggs and bottles. Another man was viciously attacked and left the scene battered and bloodied. Police stood by while Trump supporters were chased down by a bloodthirsty crowd. Punches were thrown by these activists and absorbed by Trump supporters, who declined to respond in kind.

There are no two sides to this story. Donald Trump did not whip up a crowd and demand they retaliate physically against dissenters, as he had during the primary. There were no images of Trump-backing Americans throwing haymakers at protesters, as there were in Chicago. This was a vicious mob. To the extent that their allegiance is to the Democratic Party, Democratic lawmakers – including Hillary Clinton – bear the burden of forcing them out into the cold. “Violence against supporters of any candidate has no place in this election,” Clinton campaign chairman John Podesta wrote. That is a laudable sentiment, but it is not near enough. These people must be politically homeless, and they must know it.

These fits of violence did not arise in a vacuum. These are the rewards of a political culture that has been nursed into existence by a liberal left that glorifies fanaticism. The liberal political culture on American college campuses sees no virtue in forbearance or tolerance toward dissenting views – real dissent, not the shy diffidence of a powerless minority. American college campuses are today plagued by a cast of insecure locusts who are simultaneously fragile as porcelain and uncompromisingly confrontational. This same cast of characters writes “a love letter to ourselves” and creates ideologically homogenous “safe spaces” where intellectual stimulation is thought tantamount to trauma.

This is a group that invents dangerously despotic concepts like “the right to be believed” for the alleged victims of violent crimes like rape while concurrently conveying upon speech they don’t like the power of physical violence. This attenuation of the severity of true violence has consequences. One of them is that it is now easier for these individuals to appeal to brutality as just another instrument in the political activist’s toolbox. Conservatives have long protested that the left’s desire to call speech violence and violence speech will have terrible consequences. They are upon us.

Left unchecked by responsible actors, these sentiments tear societies apart. This is how republics die.

Among the grievances that animate America’s liberal activists is an arguably noble intolerance toward anything that may be perceived to be racial bigotry. As American society banished real racism to the nation’s most dimly lit salons of ignobility, however, champions of equality on America’s campuses began to divine racist intent in the mundane. Liberals have been particularly attuned to racism in Republicans who had the temerity to challenge Barack Obama. The results of this crusade on fabricated racism has been to inure the right to the charge of xenophobia and chauvinism and also to create a cast of liberals who react disproportionately when they encounter the real thing. And Donald Trump has few qualms with the real thing.

On Thursday, the presumptive Republican presidential nominee attacked U.S. District Judge Gonzalo Curiel, the jurist adjudicating a fraud claim against the so-called “Trump University,” by insisting that this judge could not objectively rule in his case because of his Mexican heritage. “I’m building a wall. It’s an inherent conflict of interest,” the celebrity candidate averred. By assuming this American’s background alone clouds his judgment, Trump has indulged in pure and undiluted racial prejudice. Trump’s supporters seem to believe that this judge’s membership in a Hispanic lawyers group which shares a name but is entirely unaffiliated with the National Council of La Raza (NCLR) justifies these attacks on Curiel’s character. That, too, is ignorant and prejudicial, but they have a case to make against the ugly identity politics practiced by NCLR. The left perfected the art of racial agitation for political gain; only in witnessing their visage reflected in a funhouse mirror do they see how hideous this behavior is.

In March, when Trump and Sanders supporters clashed in the streets, the press made Republicans answer for their party’s frontrunner and his reckless agitation. They will surely insist that Republicans, particularly those who have endorsed Trump, answer for Trump’s racial attack on an unimpeachable justice. As they should. Media must, however, also call Democrats to account for the chaos fomented by those who support their candidates and causes. The left in America should also be made to atone for the mob they once found so useful, and the violence to which their creation has now appealed.

Republicans who have prioritized inclusivity will resent being made to account for Trump, just as Democrats who have never advocated violence will resist the notion that they are responsible for these mobs. None of that matters now. Cooler heads must prevail. There are far greater things than our pride at stake. 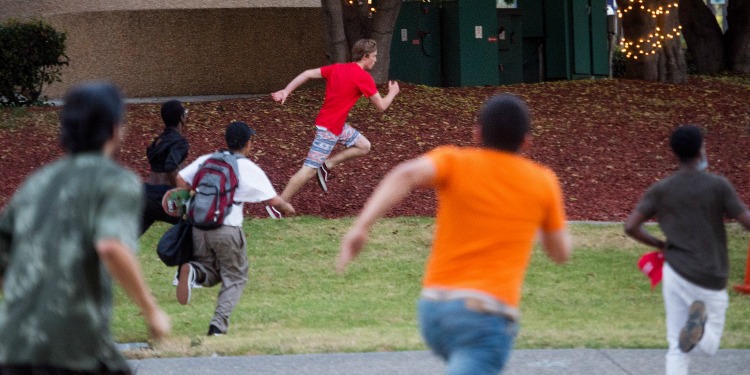