After nearly 100 days in office, Democrats in Congress appear to have come no closer to accepting President Donald Trump’s legitimacy. If you need evidence, look no further than a bill introduced by Oregon Democrat Earl Blumenauer that would allow a committee of former presidents and vice presidents—as opposed to voters—the right to determine whether a prospective U.S. president was fit for the Oval Office.

The bill, strengthening the 25th Amendment to the Constitution, would also allow the vice president and a majority of Cabinet officers to determine a president unfit and eject him from office—effectively sidestepping congressional impeachment authority. This is a legislative stab at a futile and impotent gesture with no grander objective than the mollification of the restive Democratic base. All it accomplishes, though, is to further demonstrate how impossible that task has become. Pity those liberals who offer to strap themselves to the cross to service the left’s martyrdom complex. Today, that role is being filled by the Democrat running for Congress in Georgia’s special election, Jon Ossoff.

Ossoff is vying as a Democrat to replace Health and Human Services Secretary Tom Price in his Georgia district, and already the young former congressional staffer has proven that grassroots Democrats are hungry to rebuild their depleted bench of talent. As of the beginning of April, the 30-year-old raised more than $8 million for his likely quixotic bid to represent the Republican-leaning 6th district. That’s 17 times more than any of his 17 Republican competitors and an apparent record for any congressional candidate in a single quarter.

Even with these resources, it will be difficult for Ossoff to win a majority of the vote tonight and escape a runoff election against a single Republican opponent—an election he would almost certainly lose. Special elections are notoriously hard to poll, and their results are harder to predict. Ossoff can pull off a shocking victory, but he has already shown that Democrats are prepared to play hard, and the energy is on their side. That may not be enough for liberals who have placed all their hopes for a comeback on Ossoff’s shoulders.

“Can this 30-year-old, and the anti-Trump resistance of which he’s been anointed figurehead and bellwether, reenergize young voters’ enthusiasm for democracy in general and Democrats in particular?” asked Mother Jones reporter Doug Bock Clark, who cited this race as a test of Millennials’ commitment to engage politically in the Trump era. The Associated Press dubbed the race to replace Price amid Trump’s lagging job-approval rating a “referendum” on his nascent presidency. “It’s a bellwether for what the Democratic Party is going to be about,” said Democratic National Committee Chairman Tom Perez, who was described as “giddy” about the prospects of a victory in Georgia.

That’s some lofty expectation-setting. Democrats do have good reason to suspect that voters in this district are eager for a chance to fire off a warning shot at Donald Trump and the party that supports him. Georgia’s 6th congressional district backed Marco Rubio in the primary by a hefty margin. In November, Hillary Clinton won 46.8 percent of the popular vote—a substantially larger margin of support from this district’s voters than any Democratic presidential candidate received in decades.

Yet just days ago, the aggregates of available polling (admittedly unreliable stuff) showed Ossoff securing just 42 percent of the vote. If, after all this hype and spending, Ossoff wins substantially fewer votes than did Hillary Clinton, “it will be a huge disappointment for Dems,” wrote elections analyst Stuart Rothenberg.

Any evidence that Democrats were trying to measure their expectations ahead of tonight’s vote has melted away in the frenzy as primary day approached. If Ossoff over-performs, it will send shockwaves through the political universe, put Republicans on notice, and electrify Democrats. If he falls short of 50 percent, Democrats will be crestfallen. They probably shouldn’t be. When, in 2010, Republicans failed to win a special election in Pennsylvania’s 12th district to replace the late Jack Murtha, the GOP’s grassroots were gravely disappointed. Six months later, the GOP retook control of the House of Representatives. Today, a Republican represents Pennsylvania’s 12th district. 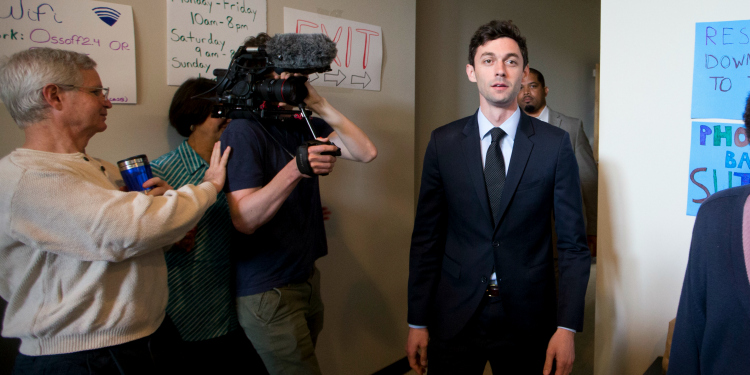