Some ideas are just too intellectually satisfying to abandon, even long after they’ve outlived their use. Among Democrats, one such idea is that the arc of history bends inexorably toward Democratic governing majorities based primarily on America’s rate of demographic change.

Dick Durbin, the Senate Democratic whip, was the latest to pay fealty to this theory of his party’s historic inevitability. “The demographics of America are not on the side of the Republican Party,” the senator said on Monday. “The new voters in this country are moving away from them, away from Donald Trump, away from their party creed that they preach. Instead, they’re moving to be independents or even [to] vote on the other side.”

This is an overly simplistic articulation of a theory posited by political analysts John Judis and Ruy Teixeira in their 2002 book, The Emerging Democratic Majority. In it, the authors suggest that as minority voters made up an ever-increasing portion of the electorate, the Democratic Party to which they are predisposed will assume more and more power—at least, as long as the party could keep the New Deal-era coalition together. The theory has been the subject of much critical scrutiny, even by its own authors. And yet, the presumption of permanent interests based on demographic identity persists.

Durbin made these remarks within the context of denouncing GOP-led state legislative efforts to pare back pandemic-related emergency voting regulations along with the emergency that gave rise to them. In some cases, those efforts did seem like they would have the effect of limiting minority participation in elections, which only speaks to how firmly the political class has internalized Judis and Teixeira’s thesis. But “demography is destiny” has long since proven itself to be a misleading explanation for voters’ behaviors; external physical features are no match for the power of ideas.

Contrary to expectations set in the aughts, the Latino vote has not drifted inexorably in the direction of the Democratic Party. In 2020, Joe Biden underperformed in heavily Hispanic districts in South Florida and along the Rio Grande. “Across the Southeast, majority-Latino precincts in Florida, Georgia, and North Carolina swung 11.5 points toward Republicans since 2016,” the Atlantic’s Derek Thompson observed. He added that there is evidence that Biden and his party saw their standing slip in counties dominated by black voters, though by smaller margins. Nor was this a one-off event. “In 2018, I think it’s absolutely clear that, relative to the rest of the country, nonwhite voters trended Republican,” the Democratic pollster David Shore told New York magazine. The results of 2020 only contributed to an already observable trend.

As the New York Times detailed in a pre-election dispatch, the Trump White House mounted a full-throated campaign to convince black voters that Democratic doctrine and the policies that result from the party’s ideological preferences represented a threat to their immediate interests. And some of the targets of this outreach campaign concluded that Republicans had a point. “I don’t see these protesters marching in these neighborhoods,” one Detroit resident told Times reporters. “A 7-year-old girl gets shot in the neighborhood, and there’s nothing. It’s real hypocrisy.” As Vox.com detailed, the black voters who were skeptical of Democratic proposals to raise taxes did so in observance of their own financial incentives, yes, but also with the understanding that doing so to expand access to government services yields diminishing returns. None of the voters with whom these reporters spoke had any illusions about which political party they regarded as less hostile toward minorities. But nor did they predicate their vote exclusively on what they saw when they looked in the mirror.

Likewise, the ideological convulsion that rocked the Democratic Party in the restive summer of 2020—during which prominent center-left figures dismissed violent rioting as “mostly peaceful” and concluded  that the cure for urban crime was to “defund” or “abolish the police”—contributed to the GOP’s unlikely victories in places like South Florida. More interesting, though, it seems that Republican efforts to highlight Democratic lawmakers’ increasingly vocal affinities for “socialism” worked—particularly among voters with living memories of or relatives attached to places like Cuba, Venezuela, Ecuador, and elsewhere in Latin America. A 2020 post-mortem conducted by center-left advocacy groups concluded, “The socialism attack was called out by many Members of Congress and candidates who were not successful who believe it hurt campaigns in states and districts with immigrant populations that fled socialist governments.”

Democrats could be tempted by their own ideological affinities to subsume these calculations into a fashionable framework that boils all complex individual motives and actions into a story about race, gender, creed, and sexual preference. That does a profound disservice to voters. Though that outlook goes by many names, it is not just another idea battling it out in the arena of public opinion. It is an idea that seeks to do away with ideas, insofar as it posits that ideas don’t really matter. All that matters is the body into which you were born, and the predestined trajectory your accidents of birth set you upon. The more Democrats embrace this notion, the more likely they are to leave the persuasion game to Republicans. The GOP would like nothing more. 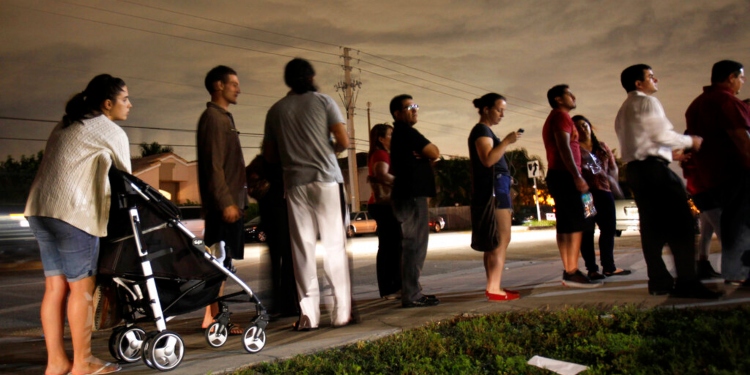