It is hard to begrudge Democrats a little self-satisfaction as they watch Republicans struggle to overhaul the American health-insurance model. Facing passionate denunciations from constituents at town halls and amid increasing dissension from within their own ranks, Republicans are getting a taste of what Democrats endured in 2009 and 2010. Given the growing list of Republicans expressing discomfort with what has been billed as “phase one” of a three-phase ObamaCare repeal and replacement process, prospects for passing the House version of the bill are murky. Democrats would, however, be mistaken to presume that they are positioned to benefit in the near-term if the GOP’s reform effort stalls. Democrats are by no means off the hook for the effects of the Affordable Care Act.

Despite the assertions of Republican House leadership that the current bill is virtually non-negotiable, it is by no means assured that this iteration will be the one that passes the House much less the Senate. With Republicans like Arkansas Senator Tom Cotton feeling stronger about attacking the House plan in public and insisting the lower chamber goes back to the drawing board, House leadership should be nervous but not panicked. If they want to force through this bill, there are tools at their disposal to punish recalcitrant members. Senate Majority Leader Mitch McConnell has signaled his intention to force through the House bill and, if worse came to worse in the upper chamber, the White House appears prepared to deploy the president to pressure Republican holdouts.

Still, this bill’s prospects appear, for the moment, dubious. Republicans have a lot they want to accomplish, and their time is short. The Paul Ryan-led House GOP wants to pass the first major tax-code overhaul in 30 years. A crisis involving entitlement spending looms, and the GOP feels obliged to address a threat Democrats refuse even to acknowledge exists. The legislature wants to roll back some of the Obama-era regulations, and, of course, Donald Trump wants to see his pledge to pass a staggering $1 trillion infrastructure proposal receive the GOP’s stamp of approval. Any one of these reforms could become as all-consuming as has the Republican health care reform bill. It’s conceivable that—in the face of insurmountable conservative opposition—Republicans could settle on a stripped-down version of repeal and replace, check a box, and call it progress.

On its face, such an outcome would seem like a Democratic victory. It would certainly be an embarrassment for congressional Republicans. Democrats could reasonably claim that their efforts to save ObamaCare from the chopping block were successful, and God help them if they do. Democrats should live in terror of that kind of a “success.”

Public polling appears to suggest that the Affordable Care Act is enjoying a renaissance. Following the election of Donald Trump to the presidency, approval ratings for Barack Obama’s controversial health-care reform law began spiking. By inauguration day, the ACA had a net positive rating in the Real Clear Politics average of polls for the first time since the law was signed in March of 2010. Since no underlying fundamentals regarding the law had changed, most analysts presumed that the public simply grew fonder of the law because it was for the first time existentially threatened. It could be even simpler than that.

Most of the surveys taken since the election that show the ACA is suddenly popular do not break down the responses along demographic and partisan lines, but the surveys sponsored by Fox News do. In August, their survey (conducted by the GOP firm Shaw & Company Research and the Democratic firm Anderson Robbins Research) found 54 percent of respondents disapproved of the ACA with only 41 percent viewing it favorably. Among the disapprovers, 24 percent of Democrats gave ObamaCare bad marks. Flash forward to mid-January and Fox’s poll found 50 percent of adults suddenly approve of the law with 46 percent dissenting, but Democrats drive much of that shift. That survey discovered that, suddenly, only 8 percent of Democrats offered pollsters negative reviews of the law. Republicans and self-described independents’ views remained virtually unchanged.

If Democrats began considering ObamaCare as a proxy for their support of the outgoing president as they stared down the barrel of a Trump administration, it is no coincidence that the ACA’s approval ratings began to correspond with those enjoyed by President Barack Obama in his final days. That also suggests that the boomlet of favorability ratings for the Democrats’ health-care overhaul is chimerical.

The unspoken but inescapable conclusion in the American Health Care Act is that many liberal assumptions about health care being a nationalized, collective problem are now conventional wisdom. There are elements of ObamaCare that are simply intractable, if only because it is politically infeasible to get rid of them; at least, not through the reconciliation process. That is hardly an ingratiating feature. As the governing party, Republicans will be blamed by voters both for what they achieve and what they fail to secure. Because this first stage of the repeal and replace process appears to leave Obamacare’s scaffolding in place and Democrats seem inclined to indulge the fantasy that the ACA is popular now, the opposition party is unlikely to strike a contrast with Republicans on health care stark enough so that they might benefit at the polls.

If Republicans fail to replace the health-care law, they alone will not bear all the blame for the ACA’s ongoing deleterious effects. For all the Democratic efforts to gin up their base over the prospect of ObamaCare’s revision, it would be better for them to get out of the way. Their conceited campaign to remind the public of the debacle that Republicans are attempting to fix is only saving the GOP from itself. 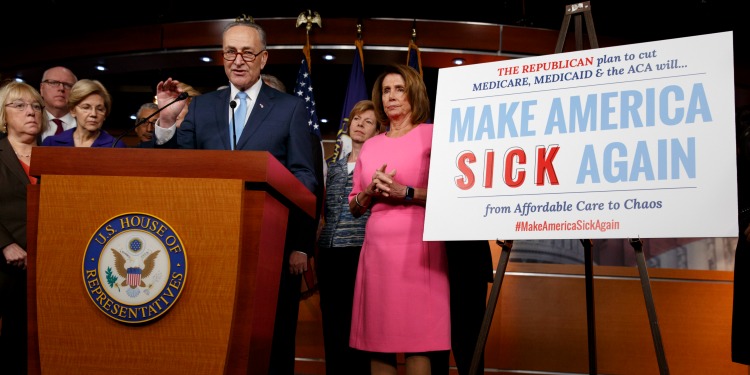