If and when journalists get the chance to sit down across from Hillary Clinton, they will have a bear of a time picking and choosing the subjects on which to grill her. From her private email server, to her family foundation’s myriad improprieties, to the increasingly deteriorating global security situation that began its backwards slide under her watch as America’s chief diplomat; reporters have an embarrassment of riches in the form of issues on which to press Clinton. But the Steve Krofts of the world like to take a 30,000-foot perspective in the gauzy profile packages to which American television audiences will be privy, and the granular details above might seem to Clinton’s interlocutors minutia that won’t capture the viewer’s attention. In order to sate the press’s desire to both make news and to ensure the viewing audience doesn’t tune out, I’d submit the following question: Does Hillary Clinton believe her husband’s presidency set the Democratic Party back?

Of course, Clinton’s reflexive answer would be an emphatic “no.” She might also posture indignantly for effect, a road-worn tactic that nevertheless retains its inexplicable ability to spook reporters into apologetic retreat. But there is precious little evidence that Clinton really does believe her husband’s presidency was a success. In fact, there are many indications that would lead a neutral observer to conclude that Bill Clinton’s presidency is anathema to modern Democrats.

Bill Clinton was elected to office as a Southern Democratic centrist with the aid of the Democratic Leadership Council, a policy shop designed to help rehabilitate a party brand that was at the time still reeling from the Jimmy Carter-era perception that it had become too liberal to represent the nation. Political observers had every reason to believe that, despite his 370 Electoral College vote victory, Clinton’s election was no mandate for Democrats but rather a rejection of George H. W. Bush. Clinton won merely 43 percent of the popular vote in a three-way race, and only won his party’s nomination after a come from behind victory over the more doctrinaire liberals seeking the nomination. If Clinton had a mandate, it was to govern from the center. With the exception of his pursuit of a significant tax hike in 1993, that’s precisely what he did.

Fast-forward to today, and Hillary Clinton has been compelled on a variety of occasions to renounce her husband’s greatest achievements. In the wake of the unrest in Baltimore last month, Clinton delivered a speech in which she advocated for an end to “mass incarceration” in America. Inherent in that address was her contention, one shared by her husband, that the landmark 1994 crime bill was discriminatory.

During his tenure, Bill Clinton signed into law measures that expanded the death penalty, promoted longer prison terms, funded the construction of new prisons, eliminated inmate amenities, barred felons from living in public housing, and discouraged judicial discretion. “We went too far,” Illinois Democratic Sen. Dick Durbin lamented on May 1 when reflecting on the Clinton presidency’s approach to crime and justice. “I think that the results,” Hillary Clinton said of the justice reforms that she lobbied for strongly in 1994, “have been an unacceptable increase in incarceration across the board.”

Surely, only a handful of Democrats lamented the demise of the Defense of Marriage Act, signed into law just weeks before Bill Clinton was easily reelected. In 2013, former President Clinton expressed regrets for signing that law, but not for running campaign advertisements on Christian radio stations in 1996 bragging about that achievement. Moreover, Clinton’s decision to sign into law federal restrictions on allowing HIV-positive travelers to enter the United States, a ban only lifted in 2009 by Barack Obama’s administration, has long been regarded by the gay and lesbian community as a betrayal.

In a contentious interview with NPR host Terry Gross last year, Clinton lashed out when she was asked why she only came out in support of same-sex marriage after both Barack Obama and Joe Biden. In that argumentative interview, Clinton insisted that DOMA was designed to prohibit the Congress from enacting sexually discriminatory laws by kicking the issue down to the states. As The Atlantic’s Connor Friedersdorf noted, however, Clinton had “distorted” the history of DOMA. “I have long opposed governmental recognition of same-gender marriages,” Bill Clinton said in 1996, “and this legislation is consistent with that position.”

And what of the signature welfare reform bill that Bill Clinton deftly negotiated with a newly GOP-dominated Congress? That measure was presaged when the 42nd President declared in his 1996 State of the Union address that the “era of big government is over,” and, a decade later, was responsible for a marked decline in poverty rates. So what does Hillary Clinton have to say about this landmark reform? No comment. “A Clinton aide declined to answer whether Clinton still supports her husband’s welfare reform law,” Vox’s Jonathan Allen reported after noting that minority Democrats were and remain suspicious of that package of reform laws. A simple “yes” would have sufficed if that is what she believed. Apparently, the answer Clinton would like to give is more complex than that.

Don’t even ask about the North American Free Trade Agreement (NAFTA). That controversial free trade agreement between the United States, Canada, and Mexico has only grown more controversial for those on the left as progressives condemn President Barack Obama and his pursuit of a similar arrangement with a variety of Asian nations. Clinton once vocally supported the Trans-Pacific Partnership, but she has since moderated her position on the issue by insisting she doesn’t have one.

But what of Hillary Clinton’s preferred approach to foreign crises? Bill Clinton’s approach to containing Saddam Hussein’s post-Gulf War Iraq was to launch attacks on government targets in 1993, 1996, and 1998. Hillary Clinton now insists it was a mistake to topple that vile regime, and she regrets voting to provide George W. Bush with that authority even if the world is better off without Hussein.

Clinton’s husband pursued a policy of rapprochement with Iran by compensating the Islamic Republic for the deaths of over 250 Iranians who died after an American naval vessel in 1988 shot down their plane and by essentially apologizing for the 1953 CIA-assisted coup that overthrew former Iranian Prime Minister Mohammad Mosaddiq. Today, Hillary Clinton ostensibly supports Barack Obama’s efforts to seal a mutually beneficial nuclear deal with Iran, she is “skeptical that the Iranians will follow through and deliver.” Don’t sweat the cognitive dissonance.

Formerly a vocal supporter of the once vogue academic notion of America’s “responsibility to protect” civilian life (R2P), Clinton justified intervention in the Libyan civil war by noting America has a moral imperative to protect noncombatants when and where it can. This was logic similar to that which her husband applied before committing to multinational foreign intervention in the former Yugoslavia in 1995 and 1998. Clearly, that formerly preferred praxis went out of style the moment Bashar al-Assad began deploying chemical weapons against his own civilian population. While Hillary Clinton has insisted that she would have vetted and armed moderate Syrian rebels faster than the Obama administration, she opposed to introducing American boots into the Syrian conflict as recently as last autumn.

While it takes a fair bit of inference to identify Clinton’s stances on these issues, seeing as she is fond of maintaining vague and amorphous policy positions, it’s clear that Hillary Clinton does not regard her husband’s presidency as one replete with successes. That’s not a personal conviction, of course; you would be hard pressed to identify any sincerely held and necessarily constricting values espoused by the former secretary of state. Her disparagements of her husband’s legacy are solely designed to appeal to an influential subset in the Democratic Party that has veered wildly leftward in the interim 15 years. If Hillary Clinton is to win the White House, it seems that her fellow Democrats will make sure that she is compelled to renounce all her husband’s works in the process. 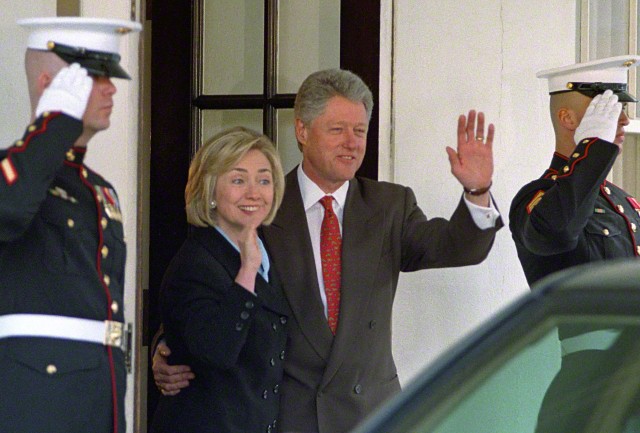