During one of the many eye-opening moments that peppered an altogether ponderous interview with ABC News, President Joe Biden described the Taliban in terms unrecognizable to any sentient observer of the Afghan conflict he chose to lose.

“What happens now in Afghanistan?” host George Stephanopoulos asked. “Do you believe the Taliban have changed?”

“No,” Biden curtly replied, only to immediately contradict himself. “I think they’re going through sort of an existential crisis about do they want to be recognized by the international community as being a legitimate government. I am not sure they do.” The president’s puzzlement notwithstanding, no one should be confused about what the Taliban’s reconquest of Afghanistan will mean.

The idea that this loose amalgam of fundamentalist insurgents would be going through an “existential crisis” after having just overthrown a U.S.-backed government is untethered to reason. Why would this collection of vandals succumb to a bout of anxious introspection while they have the world’s foremost superpower on its knees, supplicating before them and begging for their protection? In their victory, the Taliban has benevolently granted us the space to retreat, but only so that they can mete out bloody and brutal revenge against anyone who foolishly believed in our promises.

When the Taliban assumed power in Afghanistan in 1996, their first acts were to decimate the nation’s civil society. The civil services (as well as the private sector) were forced to purge their ranks of female employees, reducing the number of competent professionals who could sustain functioning state facilities. Educational and health-care services were severely disrupted. Global relief organizations like Oxfam were forced to suspend operations. From 1997 to 2001, Afghanistan’s basic services and core utilities crumbled into disrepair.

In the place of these services, the Taliban implemented a brutal system of religious repression, gender and religious discrimination, the destruction of religious relicts, and mass executions in the country’s athletic stadia. It wasn’t much of a substitute for the workings of a functional sovereignty, but establishing a Westphalian nation-state was not what the Taliban had in mind.

Has the Taliban matured during its years in the wilderness? That depends on whom you ask, though most acknowledge that the militia group’s willingness to behave in ways befitting a modern governing authority is a show for the benefit of credulous Westerners. “A vocal segment of the online Talibs have been calling for the targeting of journalists, intellectuals, and human rights and civil society activists, who they see as being part of an ‘ideological invasion’ in parallel with the military invasion by the foreign forces,” one academic analysis observed.

Indeed, the Taliban didn’t seem to have given much thought to “the specifics of how it would function or administer territory” in power. And to witness the insurgency’s priorities upon its ascension—repressing and brutalizing women, meting out bloody revenge against those who served the ousted government or U.S. soldiers, the Taliban’s priorities have nothing to do with governance.

As Christine Rosen observed, Biden’s delusional belief that the Taliban just want to be loved is a hallucination shared by the whole administration. From Deputy Secretary of State Wendy Sherman to National Security Adviser Jake Sullivan to United Nations Amb. Linda Thomas-Greenfield, this administration has promised to defend the rights of Afghanistan’s newly oppressed women and girls from the climate-controlled vantages of Western talk shops. The Biden administration expects this medieval militia to “be respectful of humanitarian law.” But what methods will Washington use to ensure compliance with whatever “humanitarian law” is? Surely, not the only language this cultish band of paramilitaries understands.

It remains to be seen if the Biden administration is kidding anyone other than themselves; or, rather, themselves and anyone who is desperate enough to avoid the conclusion that this administration has no idea what it’s doing. It won’t be long, though, before the terrible reality of what this White House has brought about will become impossible to ignore. 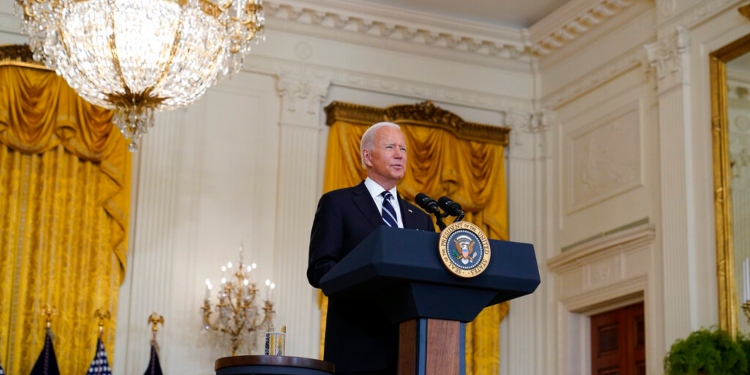