It seems much of the country–up to and including Donald Trump’s campaign team–was entirely unprepared for the celebrity real estate mogul’s election to the presidency. For some, that shock has transformed into spasms of violence. The activist left has taken to the streets and, in some cases, engaged in riotous violence. An uptick in disturbing reports of racist pro-Trump vandalism is adding fuel to the fire. Most of the American political class–including Donald Trump–behaved more admirably than their detractors expected they might. For the left and their enablers in the press, however, it’s another story.

Television and news consumers could be forgiven for thinking that the biggest story of the weekend emanating from the president-elect’s camp was his disclosure that he might use Twitter less often in the Oval Office. That and the revelation that Trump may choose to keep some key portions of ObamaCare in place were the key quotes released by CBS News following “60 Minutes” the taping of a wide-ranging interview with the future president on Friday. What CBS News declined to release even as near-riotous anti-Trump protests were unfolding across America was Donald Trump’s call for calm.

When prompted by interviewer Lesley Stahl to respond to reports of outbreaks of racist vandalism and harassment conducted in Donald Trump’s name, the president-elect denounced them. “I would say don’t do it; that’s terrible,” Trump said of reports of his supporters harassing minorities. “I am so saddened to hear that, and I say stop it if it helps. I will say this, and I’ll say it right to the camera: stop it.”

A CBS News spokesperson insisted that they chose to release Trump’s quotes regarding the status of Obamacare because it is an “issue that affects the most Americans.” No comment on the revelations regarding Donald Trump’s Twitter habits.

This was a shameful moment of civic irresponsibility on the part of CBS. It is one that is no less dangerous than Trump’s decision to take to Twitter on Friday night to indulge in self-pity over “very unfair” liberal demonstrators, most of whom only exercised their First Amendment rights in protesting his election. Media has a responsibility to avoid sensationalism in these moments of national tension, and there are plenty of rumors to dispel. The scale and nature of the alleged incidents of racist violence are in doubt.

Too many in the press have unreservedly echoed the findings of the partisan Southern Poverty Law Center, which reportedly received no fewer than 200 reports of racist and anti-Semitic harassment and vandalism since Election Day. Surely, there have been and will continue to be real episodes of real hate in America. The FBI confirmed a 6.7 percent increase in crimes targeting Muslims in America last year, and that didn’t happen in a vacuum. Claims of widespread pro-Trump racist episodes following his election have, however, been hard to confirm.

As Reason’s Elizabeth Nolan Brown ably demonstrated, some of the most high-profile reports of racist attacks were prima facie absurd, unconfirmed by local police, and unraveled on their own. A widespread plague of racial hoaxes on American campuses perpetrated by their alleged victims predated Donald Trump’s political career. Yet that understanding has not imposed any caution on a popular media culture that rewards hysteria—particularly that which enlivens the left and confirms their biases.

Meanwhile, much of the violence exhibited by the left is real and confirmed. This weekend, police documented the assault on a Connecticut man waving an American flag and holding a pro-Trump sign. A video of a Chicago man torn from his car and beaten while onlookers shout “he voted Trump” has attracted police attention. Massive demonstrations protesting Trump’s election have taken place in many major American cities, and not all of them have been entirely peaceful. Demonstrators chanted “kill the police” as they marched down the streets of Indianapolis while throwing rocks at law enforcement, injuring at least two. One person was shot during the fourth consecutive night of protests in Portland, Oregon. The city has seized up as a result of what police have called a “riot” sparked by the election results.

Do the left and their proponents in the press want peace? They’re not acting like it. Violence targeting otherwise non-violent Donald Trump supporters was by far and away the most shamefully under-covered story of the 2016 election cycle. If the left and their enablers in media were truly interested in quelling the violence, they would broadcast calls for calm from America’s responsible actors and display more caution in legitimizing dubious reports of racial violence. More important things than ratings and clicks are at stake. 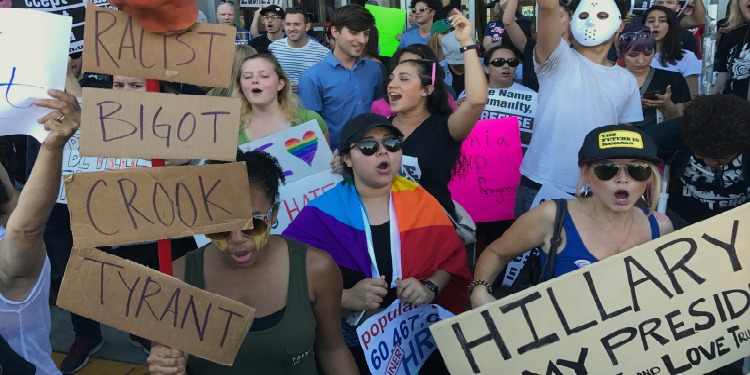