Okay, sure. It came well after political professionals predicted it would, but it came nonetheless: Donald Trump is beginning to decline in the polls. After 100 days as the poll leader in national surveys, The Donald now trails Dr. Ben Carson in the latest CBS News/New York Times national survey of GOP primary voters by four points. This revelation came following findings from several respected and accomplished polling outfits that showed Trump’s standing in Iowa rapidly declining. In the last four live caller surveys of likely GOP caucus-goers in the Hawkeye State, Trump trails Carson by anywhere from 8 to 14 points. Republicans who are concerned about Trump’s rise and remain hopeful that he will soon be delivered into irrelevance should, however, observe caution. After running an unorthodox presidential campaign for several months, Donald Trump appears to be embracing the conventional and getting serious.

First, the polls. Yes, Trump appears to have peaked several weeks ago, but his standing in the surveys taken since the last GOP debate never showed him declining to pre-debate lows. What’s more, Trump has manufactured comebacks in the polls before, and it would be unwise to suggest he doesn’t have another one in him. Finally, while that CBS/NYT survey did show a decline in Trump’s standing, it also revealed that he has a high floor of support. That poll revealed that most GOP primary voters are still in the courtship phase of the campaign; they are flirting with backing a candidate, but seven in ten Republican primary voters have not made a final decision about which one they will support. That is not true of Trump backers. Of his 22 percent of supporters, 55 percent describe themselves as fully committed to their candidate. After all, where would they go? There is no Trump alternative in the race. Brash, disruptive, vaguely liberal on virtually every issue save immigration, there is no other candidate that would satisfy these voters’ impulses running for the White House on the GOP line.

Many a Republican political professional is unconvinced that Trump has much staying power, though. Past surveys have indicated that his voters are not nearly as likely to head to the polls and pull the lever for him as they are to tell pollsters they support him. Until recently, there has been no indication that Trump has built the organization in the early states necessary to convert raw support into votes. That all changed this week.

In what looked like a coordinated effort on the part of Team Trump to swamp a dispiriting news cycle focused on the candidate’s declining poll numbers on Monday night, both CNN and the Boston Globe published extensive dispatches detailing the increasing sophistication of Trump’s early state ground game.

Of the GOP operatives Globe reporter Matt Viser spoke with in early states like Iowa, New Hampshire, South Carolina, and Nevada, few were impressed with any of the Republican presidential candidates’ financial or organizational commitments. That is, except for Trump. The Globe revealed that the celebrity candidate has spent $1 million in the early states — far more than any of his rivals — and recently opened two new campaign offices in New Hampshire. Though Viser was not allowed to tour those offices or speak with aides, his report revealed a surprising devotion to creating a formidable operation.

Trump has hired Chuck Laudner, the Iowa-based political operative who engineered Rick Santorum’s come-from-behind 2012 victory in Iowa, and now has captains in place in all of Iowa’s 1,800 precincts. What’s more, they have been organizing supporters and focusing on educating them on the caucus process – an arcane and fast-paced exhibition that can be intimidating to the uninitiated.

Simultaneously, CNN reported that the Trump campaign is now “touting an army of volunteers, sophisticated data collection and strategic planning for nominating contests further down the calendar as their keys to victory.” It is a marked shift in tactics for a campaign that had previously eschewed the trappings of a winning candidacy, and for a candidate who once refused to even hire an internal pollster. CNN also revealed that Trump’s team is thinking beyond the early states and into March of 2016, focusing now on being the first candidate to navigate myriad procedural hurdles and secure ballot access in Virginia – a feat that both Newt Gingrich and Santorum failed to achieve in 2012.

Now, it’s important not to overstate Trump’s organizational strength. He is by no means running Ted Cruz’s campaign. The Texas senator might be running the most sophisticated and far-sighted structural campaign of all the GOP candidates, rivaling even that of Jeb Bush. Cruz is betting that his deft fundraising strategy and his ability to position himself as both a tea party and evangelical favorite will eventually provide him with a deeper well of voters from which to draw support. But Cruz isn’t waiting for fate to come knocking on his door.

“With fewer than 100 days until the caucuses, Cruz’s paid Iowa team has just jumped from two staffers to eight, POLITICO has learned, with more reinforcements from Houston on the way,” read the Beltway publication’s most recent report on Cruz’s structure. “The campaign has already used its analytics department to crunch the number of target voters who live in every Iowa precinct (as well as some other early states), and scored them individually for their likelihood to turn out for Cruz.”

There are few reports that indicate Team Trump is investing as wisely in data as has the Cruz team, which will not only aide them in the primary process but will translate into organizational strength ahead of the general election. According to September financial disclosures, Trump had not even yet purchased the national Republican Party’s voter file (a database of registered voters broken down by county). “If Trump’s campaign were not using any voter file, even after being offered it by the RNC, that would be a pretty shocking statement,” Engage founder and veteran GOP operative Patrick Ruffini told Quartz last week.

Qualifiers and caveats abound, but Trump’s team is no longer running a purely earned-media driven campaign. While his committed floor of support ranges from just 10 to 15 percent of the GOP electorate, his operatives are building an apparatus that promises to deliver each and every one of them to the polls in February. Unless Trump quits the race and releases them, it’s likely that the real estate mogul will be able to count on a significant number of delegates showing up in Cleveland next summer ready to fight for their candidate. 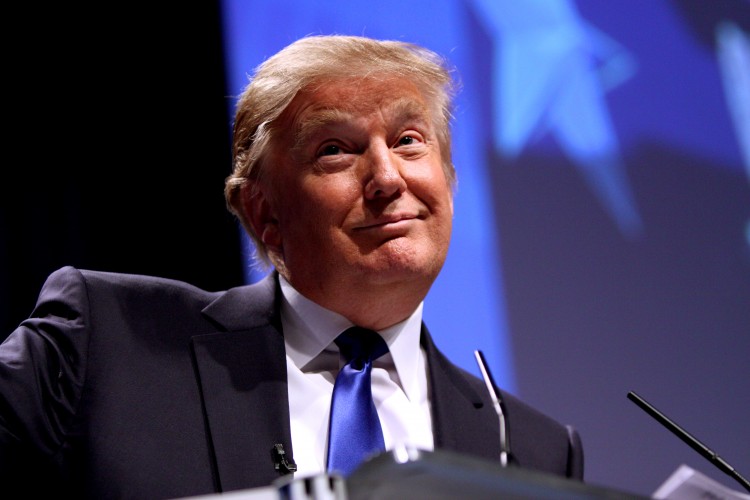