Donald Trump did not turn in an exceptionally strong debate performance on Monday night, and this is putting some negative pressure on his position in the polls. That’s a tough reality, so Trump has decided not to face it. Instead, he has urged his followers to ignore scientific polling and instead to place greater weight on the value of statistically nonsensical online surveys.  Why? The vast majority of those show that he won Monday night’s debate, and by lopsided margins.

“I have to sit back, and you have to sit back and hear about how those polls don’t mean anything, but when they poll 300 people, that means a lot, right?” scoffed an incredulous Trump on Wednesday. And, of course, this claim has been unthinkingly echoed by Trump’s allies in media—who then had to be lectured by their bosses for doing so. “These quickie click items do not meet our editorial standards,” read an internal memo to Fox News employees.

Meanwhile, Republican Party apparatchiks are diving into the fever swamps. “Was @HillaryClinton wearing an earpiece during last night’s presidential forum?” asked the Florida Republican Party’s verified Twitter account on September 8 after a candidates’ town hall event. To support this outlandish accusation, they linked to a post at the professionally paranoid conspiracy website InfoWars.

Think about that for a second. This is a state-level Republican Party directing its members to consume the delusions peddled by a site that has a business model based on selling the idea that 9/11 was an inside job, that the government puts mind control drugs in public water supplies, and that contrails from civilian aircraft are really chemical aerosols.

If endorsing and supporting Donald Trump means signing on to conspiracy theories, the Republican presidential nominee’s fan club has a lot to catch up on. The celebrity candidate has claimed that he saw “thousands” of American Muslims in Jersey City cheering 9/11 without evidence. “You always have to look to the person at the top,” Trump said of the September 11 attacks amid the careless insinuation that President George W. Bush could have done more to prevent them. He has insisted that Google “suppressing bad news about Hillary Clinton.” He has suggested Antonin Scalia was murdered, and accused Ted Cruz’ father of having a role in the Kennedy assassination.

What if this paranoid fever fails to break after November? What if Trump declines to accept the will of the voters as valid, as he has intimated on several occasions? What if Trump retreats into comfortable conspiracy theories about a Clinton victory, nursing in his supporters a sense of alienation and grievance while undermining the legitimacy of the American electoral process? The consequences could be catastrophic. And that presumes he loses in November. What if he wins? It’s only reasonable to expect Republicans’ attachment to empirical reality—at least, those realities that Trump finds inconvenient—will further erode. Great. 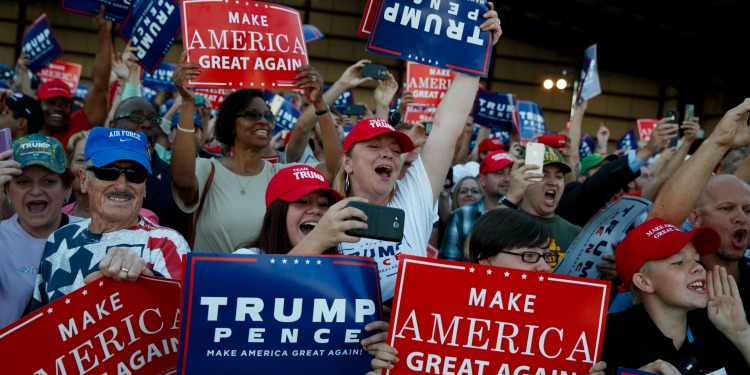