As Donald Trump painted a picture of an unjust, unequal, crime-ridden America on Thursday, the world outside refused to comport to his bleak vision. I’m not talking about the statistics about crime and violence on a macro level; it’s not hard to find talented journalists and dispassionate analysts dismantling the bizarrely popular, self-pitying notion that modern America is some kind of Dickensian nightmare. I mean right outside the Quicken Loans Arena in Cleveland. Heading into the convention, many believed that an outburst of widespread violence was virtually inevitable. Instead, the relatively placid protests that staged outside Trump’s four-day nominating convention were encouraging in a way no Trump supporter can tolerate.

In the months leading up to Trump’s nomination, a disturbing trend toward violence became terrifyingly pronounced. Over the winter and spring, Trump himself indulged the most brutal impulses of his most impressionable supporters. He threatened to sic his rabid supporters on protesters and promised to pay the legal costs incurred should they be prosecuted for acts of savagery in his name. Some of his most rabid supporters heeded the call. As the spring transitioned into summer, though, Trump’s rhetoric softened, but his opponents only grew more vicious. Anti-Trump demonstrators became violent and, in city after city, average Trump supporters found themselves the targets of unreciprocated attacks by leftist agitators.

As the nation lumbered heedlessly toward Cleveland, many thought this noxious mix would result in a city on fire. In preparation, the city began preparing for the worst. Cleveland purchased an army’s worth of full-body riot suits, shields, and non-lethal crowd control gear ahead of the GOP convention. In the weeks leading up to the convention, the police-related killings of Alton Sterling and Philando Castile and the targeted attacks on police in Dallas and Baton Rouge created the sense of a nation in crisis. Law enforcement officials had all but conceded that the best-case scenario would be images of angry crowds, tear gas, and property destruction as these volatile gangs came into proximity.

And all of this anticipation culminated in… almost nothing. The first two days of the convention were remarkably peaceful with Cleveland police reporting just five total arrests and no widespread disturbances. The third day was worse. 17 people were arrested. Two officers were assaulted while trying to disperse the crowd, but most of the injuries that occurred during that event resulted from the protesters accidently setting themselves on fire in the attempt to burn American flags. All told, there were 23 arrests over the course of the entire convention. The fear that Cleveland’s open carry law, which allowed protesters and convention attendees to carry firearms out in the open, would yield deadly violence was unfounded. In the end, it was a remarkably uneventful week in the streets of Cleveland.

That is undoubtedly good news. So why haven’t you heard much about it? Well, good news doesn’t sell these days, particularly among a set of Republicans who have pushed all their chips in on the notion that they can convince 50 percent of the country that the United States is a terrible place to live. The appeal of this notion is certainly understandable, but that doesn’t make it right. It is not an act of love to indulge someone’s unsupported delusions. In fact, it is a display of remarkably insulting disrespect.

On Thursday, Trump campaign chairman Paul Manafort himself said his candidate’s supporters should reject 25 years of FBI crime statistics in favor of an irrational conspiracy theory that holds the Bureau has been laying the groundwork of a third Clinton term for the last quarter century. That’s simply insane, and anyone inclined to believe it is not well. It would be perfectly condescending to allow the committed pro-Trump Republican to wallow in the fantasies his campaign promotes. Those who refuse to let the lies stand aren’t, however, revealing their disrespect for the working-class or posturing for elite media approval. They are, in fact, showing Trump supporters more respect than the Republican nominee ever has.

There are, in fact, signs of positivity, hope, and optimism all around us. Judging from much of the coverage, there was more jubilance and good will outside the convention than in it. It is a bizarre pathology that leads Americans to reject this objectively positive news in favor of pessimism and anger. The happy warriors who decline to take comfort in a popular and unfounded victim narrative are and will remain the true heirs to Ronald Reagan’s legacy. 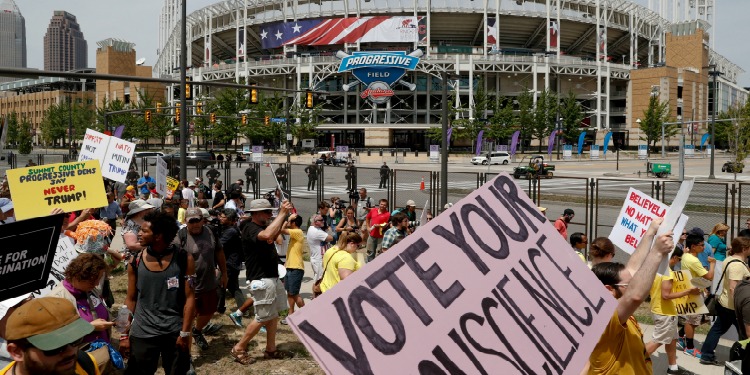