This week, Hillary Clinton has demonstrated that her focus has begun to shift away from the all-but-over Democratic primary race and toward the general election. The focus of the political press has also swung in a similar direction.

A subtle shift in tone has begun to characterize the coverage of the real estate heir’s campaign. It is one that will become more pronounced if and when Donald Trump becomes the Republican nominee. As Jonathan Tobin noted accurately in his assessment of the baseless McCarthyite smearing of a variety of Republican women who are alleged, in an unsubstantiated tabloid story, to have engaged in improprieties involving Senator Ted Cruz, the free and uncritical airtime Trump once enjoyed has given way to something more discerning. It was always obvious that, when the time came, the political press would begin dismantling the myth of Trump they had helped erect over the course of the 2015-2016 election cycle. What’s more, that wouldn’t be an especially difficult task. The years in which the celebrity candidate spent gracing the front pages of New York City’s tabloids and daily newspapers have made Trump a political dead man walking. All that the political press needed to do to turn Trump into a radioactive figure was to treat those old stories as though they were fresh and urgent. It has begun.

A quick perusal of the headlines in the last 24-hours tells the tale, and it is one that Hillary Clinton will be more than happy to repeat. It is the story of a gender gap that, as John Podhoretz observed weeks ago, threatens to become a gender chasm. All it will take is a journey into the past, and the press is making the trek:

“Donald Trump can’t stop saying nasty things about women. It could cost him.” – the Washington Post.

“In Trump’s World, Women Have Always Been Objects.” – the Huffington Post.

Et cetera. Et cetera. You can perform a search for the subject on your own and find that barrels of digital ink have been spilt digging into Trump’s history of ugly and misogynistic behavior toward women in the last day or so. All this might have been worthy of concerted media inquiry months ago. Perhaps when Donald Trump was implying that Megyn Kelly’s menstrual cycle had led her to ask probing and journalistic questions during a summer presidential debate. Or maybe when the real estate mogul said outright that Carly Fiorina wasn’t pretty enough to be president. Or even when he said Hillary Clinton had been “schlonged” by Barack Obama in the 2008 Democratic primaries. Why now?

Well, some have speculated that this like-think within political media culture is the result of a reaction to a series of new polls released this week that reveal a marked shift among voters away from Trump and toward Clinton. Five of six national surveys released this week show Trump’s unfavorability rating over 60 percent – often approaching 70 percent – and all of them show him with a majority disapproval rating that is only getting worse. Trump isn’t only losing to Clinton by a double-digit average; he is doing especially poorly with women voters. And not just Democratic women but Republicans, too.

According to the latest NBC News/Wall Street Journal survey, nearly half of all self-identified Republican women – 47 percent – say they would be hard-pressed to cast a vote for Trump in the general election. But Trump didn’t just start polling poorly among women this week – although that phenomenon has grown worse, particularly when his campaign became a magnet for the potentially violent. Trump’s support among Republicans has for months been buoyed nationally by the backing of a disproportionate number of male voters. This was true as early as August and September. Though Trump appeared to have repaired his reputation with all GOP voters, including women, in the autumn of 2015, the gender gap returned with a vengeance by January.

It is not as if there was no evidence before February that a Trump general election campaign would turn off record numbers of women voters. It always stood to reason that, if Trump’s favorability among Republican women was anemic, his appeal among all female voters – who are expected to make up between 52 and 54 percent of the overall electorate in November — would be abysmal. Well, surprise!

So, the question again becomes, why now? Certainly, Trump has forced the issue with his unprovoked attack on Ted Cruz’s wife, and Ted Cruz has kept the issue in the news by responding as any husband would when his wife is attacked. It is, however, the uniformity with which national political media has sought out an angle on Trump’s limited appeal with women, and the alacrity with which reporting on that angle became a pile-on, that is most revealing. This is a window into what the general election will look like should Donald Trump become the nominee.

While he was “winning,” Trump enjoyed the deference of the press. Now that he’s losing, and losing badly, the political press is going to make it hurt. 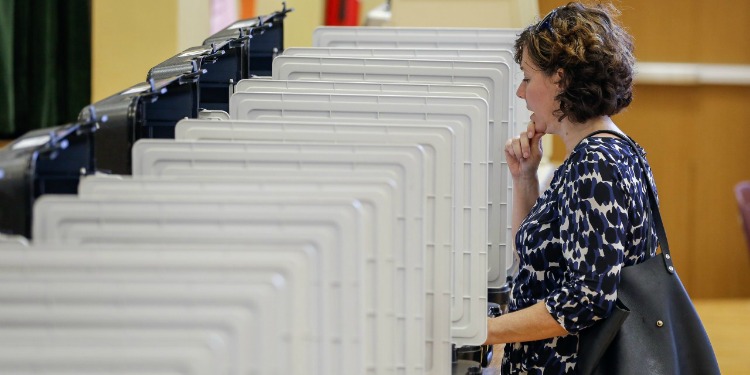