“Let’s tell the truth,” Walter Mondale famously declared in his speech accepting the Democratic Party’s presidential nomination in 1984. “Mr. Reagan will raise taxes, and so will I. He won’t tell you. I just did.” What was radical about this admission was that Mondale really meant it. He wasn’t just talking about the comfortable upper-middle-class Americans, who Democrats lump in with the “super rich” vragi naroda. He was referring to nearly all taxpaying Americans.

“In an era of relatively high inflation, during which ‘bracket creep’ was a big concern for middle-income families,” Reihan Salam observed, “he called for limiting the indexing of tax brackets for roughly half of all households, a step that raised most of the revenue he hoped to generate from individual taxpayers.” The rest is, of course, history.

Last week, Donald Trump made the Mondale mistake in its most elemental form. He told the truth. In a speech to his supporters in Manchester, New Hampshire on Thursday, Trump confirmed that the results of his protectionist and antagonistic anti-global free trade policies would be two-fold. The first, he claimed, will be more, better jobs for Americans. The second, however, will be that the costs of consumer goods, for which all Americans pay on a regular basis, will go up.

“We’re better off paying a little bit more and having jobs,” Trumps said. “It was a much better system the way it used to be.”

This might resonate with an economically displaced segment of the American workforce, which statistics indicate are primarily those without a college degree who never saw their position recover after the Great Recession. It is true that the official unemployment rate has fallen below 5 percent. But a low rate of adult participation in the workforce, anemic wage growth, and high long-term unemployment rates make the recovery feel worse than the statistics suggest.

While this promise may appeal to a minority of those who perceive themselves to be underemployed—particularly those drawn to blue-collar fields—it will fall flat with the rest of the nation for whom higher priced consumer goods mean having to make difficult tradeoffs. A blockbuster survey released in the summer of 2013 found that over three-quarters of Americans are living paycheck to paycheck. The promise of paying more for daily household items and luxury goods is an immediate threat. The offsets for those sacrifices, the promise of new domestic manufacturing jobs in which Americans will produce flat screen televisions and kitchenware, are written on an IOU. For a majority, the cost/benefit analysis of a Trump presidency doesn’t make sense.

“It is time for America to have a season of excellence,” Mondale added near the close of his address to a doomed ship of Democratic stalwarts. “Let’s get with it in America again.” But Americans didn’t hear this eerily familiar retrospective appeal to America’s lost exceptionalism. They heard a man who was coming for their paycheck. When Trump declares his intention to “Make America Great Again,” Americans may again start to grasp involuntarily at their wallets. 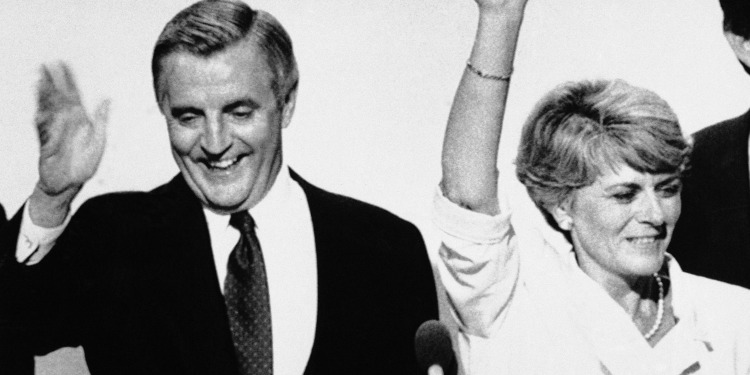