On Tuesday, the Trump campaign released the preliminary details of his plan to compel private enterprise to provide new mothers with no fewer than six weeks of paid maternity leave. This is only the GOP nominee’s latest pander to voters that also sacrifices core conservative principles. Trump’s proposal would allow mothers to collect six weeks of unemployment benefits following the birth of a new child, but the candidate will also pledge to re-write the tax code—no simple thing—to allow families to deduct childcare expenses.

Populist Republicans, who have long lamented that conservatism is a tough sell, are apt to see Donald Trump as a savior sent from on high. Here is a self-described Republican who has cast aside the austere facade of fiscal conservatism in favor of any and every spending proposal that crosses his transom. Promising the electorate the world in the campaign with every intention of working out the details after the election is hardly a new phenomenon, but it used to be one that Republicans rejected. Today, under Trump’s corrupting umbra, the GOP has become the party of wild assurances and cascading spending proposals with no intention of ever making good on them.

Those predictable voices who have branded bootstrap conservatism a dead letter will rejoice over this “compassionate” proposal. Their ranks will doubtlessly include those Republicans who furiously denounced something virtually identical to it in Barack Obama’s 2015 State of the Union address. Integrity and consistency are luxuries not afforded Trump’s water carriers. But there are still a few conservatives concerned with minor details like how Trump plans to pay for these promises. They will be disappointed to learn that the Republican nominee hasn’t devoted more than a moment’s thought to fleshing out realistic policy proposals.

In the case of Trump’s maternity leave pledge, the campaign promised to offset the costs of a spike in new beneficiaries by eliminating “fraud” on the unemployment rolls. That’s not a plan; it’s an insult. The old canard of “waste, fraud, and abuse” is the last refuge for the politician who has no idea how to pay for his or her policy preferences—at least, not without unpopular tax hikes.

This is not the first time that Trump has appealed to the notion that all things in Heaven and Earth can be paid for if only the IRS were expanded and given the tools necessary to root out corruption. Last week, Trump promised to augment the Pentagon’s budget by repealing the portions of the Budget Control Act of 2011 (aka, “Sequester”) that imposed limits on defense spending. To offset those costs, Trump said he would ask Congress to “eliminate government waste and budget gimmicks” and “improper government payments,” i.e. waste, fraud, and abuse.

Trump has called for “more funding” for the Department of Veterans Affairs to augment job training, research on traumatic stress, brain injury, and suicide prevention, and to hire more service providers at VA hospitals. The Republican nominee promised a massive $500 billion public works program that you dare not call a “stimulus,” which he proudly boasted would spend more than double what Hillary Clinton has pledged to refurbish America’s infrastructure. Where is the money coming from?

There is Trump’s immigration plan, which consists of the ill-defined but surely costly augmentation of America’s immigration and naturalization forces. Some estimates indicate that it would cost approximately $300 billion to round up and deport America’s illegal immigration population—a depopulation of the U.S. that would strip $1 trillion from America’s real GDP virtually overnight.

And, of course, there is the wall. Trump insists that it will cost a mere $8 billion to build that 1,000-mile barrier of ever-increasing height, but structural engineers have estimated that the materials costs alone would exceed $17 billion. That is before environmental impact studies are conducted, property disputes are resolved in the courts, and project labor is contracted to actually do the work.

To pay for all this, Trump has promised precisely nothing. He has pledged not to raise taxes, although he insists the benefits of programs like his childcare cost tax deduction would be unavailable to the nation’s highest income households. He has attacked as cold-hearted the idea that America’s entitlement state must be curtailed and reformed—a massive expenditure that already consumes nearly two-thirds of the nation’s annual outlays. Trump has promised to cut taxes on middle-income Americans and businesses with the expectation that such a move would spur growth. He is, however, coupling this proposal with crippling trade protectionism, a forcibly truncated workforce, and crushing public spending that would stifle any growth he expects to catalyze.

This is all Anti-Conservatism 101. None of this is alien to anyone who followed politics prior to June 2015 when the reality television host descended his gilded escalator in Manhattan to seize control of an American political party. Republicans have conveniently forgotten the laws of fiscal gravity while wrapping their arms around this unreconstructed Democrat. In seeking the presidency, Trump has written more bad checks than any liberal in recent memory. God save Trump’s coterie of flatterers if they ever find themselves having to make good on all these promises. 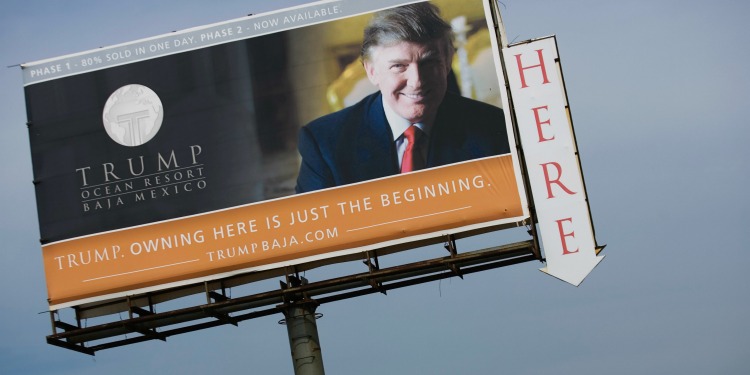